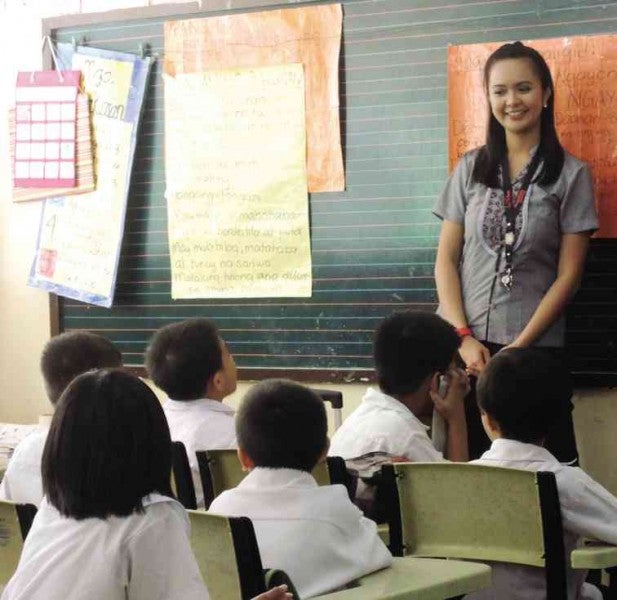 A classroom full of rowdy, shrieking kids usually comes with an angry and stressed-out teacher.

But in a noisy Grade 3 Science class at Malaban Elementary School in Biñan, Laguna, the teacher is calm. And when the situation seems out of control, she counts: “One!” As if she flicks an “off” switch, the room goes quiet. All students have both arms raised.

“Two!” Now the students’ arms are outstretched at their sides.

“Three!” Everyone’s arms are folded on top of their desks and focus on the lesson is back.

Arra Aguilar, 24, learned such discipline techniques from the nonstock, nonprofit organization Teach for the Philippines (TFP). Learning these methods was important for Aguilar because, as a BS Community Nutrition graduate from the University of the Philippines (UP) Diliman, she had zero background in formal teaching.

Aguilar is one of the 92 fellows (TFP teachers) teaching elementary schoolchildren in 18 public schools across five cities. Like her, many of her co-fellows do not have degrees in education. The group has a healthy mix of graduates from various disciplines like philosophy, psychology, communication, business, management and economics.

One’s educational background is of little consequence, however, when applying for a TFP fellowship because of the organization’s belief that “education is everybody’s business.”

“While a fellow with a background in education brings pedagogy and classroom management skills to the table, someone from, say, community development, brings a different perspective [on teaching],” said Patricia Feria, TFP chief of strategic resources officers.

As part of the global social enterprise network Teach for All, TFP’s vision is to provide better quality education to Filipino students by improving the training standards of public school teachers. Feria and Clarissa Delgado, TFP cofounder and chief operating officer, put up TFP as an offshoot of Sa Aklat Sisikat (SAS) Foundation, which worked to improve the literacy of public schoolchildren.

“TFP is an effort to expand our work in Sa Aklat Sisikat,” said Delgado. “[With SAS], we were in schools for only 30 days, focused on functional literacy (books and reading) and worked with the fourth-grade level because based on research that’s the age when kids begin to form habits.”

“SAS was around for 12 years and trained 25,000 teachers, and [reached] one million students—but still, it took them 12 years. So we had to think about how we could make [the process] faster and reach more kids,” Delgado said.

Along with Delgado, TFP was established in 2012 by Elizabeth Eder Zobel de Ayala and Margarita L. Delgado, the same people behind SAS. TFP gets funding from foundations and local and foreign firms.

TFP has also partnered with the Department of Education (DepEd) and local government units (LGUs) where fellows are assigned to teach: Quezon City, Marikina, Mandaluyong, Navotas and the City of Biñan.

LGUs are in charge of paying fellows a salary of P17,099 a month, slightly less than the P18,569 that a regular “step one” public schoolteacher earns. Fellows also receive an allowance of P2,500 from LGUs and are given government benefits, such as SSS, PhilHealth and Pag-Ibig. Fellows sign a two-year teaching contract with TFP.

To comply with DepEd’s standards, fellows follow the K-12 curriculum in their lessons.

Recruitment begins with the admissions phase, during which TFP’s administrative team interview all applicants. Once accepted into the program, candidates take on a two-month pre-service training called Summer Institute.

The 2013 cohort received training at Ateneo de Manila University in Quezon City and was provided accommodations at a nearby dorm. For the 2014 cohort, TFP partnered with Phinma Education Network and trained candidates at University of Pangasinan in Dagupan City, one of the country’s biggest education schools.

Only after finishing training at Summer Institute are applicants accepted as fellows. Most of the current fellows are graduates of UP and Ateneo.

At Summer Institute, candidates without any education background must take up 18 units of Basic Education, which covers topics such as assessment, education philosophies, education psychology and Philippine education system.

Classroom management is also one of the major topics tackled during Summer Institute. This involves learning techniques on how to discipline children and keep them focused on the lesson.

UP Baguio Fine Arts graduate Vita Jean Claveria Acosta, 23, had no background in classroom management before joining TFP. She learned to use “trackers” that display her students’ ranking in class. “I love how the trackers work because the children I handle are naturally competitive. When they see that their classmates are getting ahead of them, they strive harder and become more attentive in class.”

Aguilar’s counting technique, which she uses in her Science class, is similar to what University of Asia and the Pacific graduate Ann Clarice Fajardo, 23, uses with her Grade 3 students at Highway Hills Integrated School in Mandaluyong. With her, rhythmic clapping and chanting, “1, 2, eyes on me; 1, 2, eyes on you,” work in capturing the kids’ attention. Fajardo has a Bachelor of Arts Degree in Humanities, major in child development and education.

When it comes to instilling discipline, Kit DG Pabiona, 22, a BS Secondary Education graduate of West Visayas State University, simply tells his Grade 3 students at Sto. Cristo Elementary School in Quezon City: “You know the right thing to do. Do it.”

“Discipline should start from within. The best thing a teacher can do is to explicitly rationalize pupils’ actions. Routines and reflective questioning also help,” he said.

Once Summer Institute is done, fellows are assigned placement schools. The first batch of fellows—who are graduating from the program by the end of the school year—was assigned to teach only Grade 3 students in Quezon City schools. By the time the 2014 cohort began teaching, TFP had expanded to four more cities and all elementary levels.

Delgado said TFP chose to start in cities in Metro Manila and in a “peri-urban” area (Biñan) for proximity reasons. TFP is based in Makati City and the administrative staff wanted to make sure they were accessible to their fellows.

“There’s also the issue of language. If we start in the provinces, we would have to recruit locals who speak specific dialects since in elementary there is a subject on Mother Tongue,” added Delgado.

Out on the field, fellows discovered that despite the training, nothing could have fully prepared them for the work they set out to do.

“A whirlwind of chaos” was how Acosta described her first few days of teaching.

“I had to toughen myself up,” said Acosta. “I am a soft-hearted person; I don’t look strict. My students tend to forget that I am their teacher.”

Another teacher at Malaban, 21-year-old Mariebel Ferranculo, a BS Psychology graduate of De La Salle Lipa, said she had cried in class out of frustration. However, since she was aware of her pupils’ underprivileged backgrounds, she found it easier to understand their behavior. Most of the fellows’ placement schools are in depressed areas.

Fajardo has had to deal with improper classroom behavior, such as cussing.

“I handle [cussing] through positive discipline,” said Fajardo. She sets clear rules and firmly implements them, and constantly integrates values in class.

For Aguilar, it’s normal to hear students talk about “shabu” (methamphetamine hydrochloride) or someone getting shot. “When that happens, we can’t just ignore them. We have to talk to them and help them process what they said, to let them know that [doing drugs or killing] isn’t OK.”

Fellows also have to battle fatigue. On top of teaching 40 to 50 kids per class, they have papers to check, forms to fill out and visual aides to prepare every day. Some fellows also handle remedial classes for kids who have difficulty reading.

Four Filipino-American fellows faced a different challenge when they began teaching: Cultural divide, especially since they grew up in the United States.

To assist fellows, leadership development officers check in with them once a month to discuss their experiences. Every second Saturday of the month, TFP holds Super Saturday, a series of discussions with industry experts, which is still part of their teacher training.

Despite the challenges, the pros seem to outweigh the cons for fellows. They have become happily immersed in their work—whether they have been at it for almost two years or just a few months.

Most have relocated from their hometowns since the start of Summer Institute and have gone home only once or twice during holidays. Some fellows have bunked together near their placement schools to reduce living expenses. Of the 92 fellows, only one is married and has three kids. Their ages range from 20 to 35 years old.

The joys fellows experience sometimes come in the simplest gestures, such as students taking time to “mano” when they meet their teachers along corridors, or saying a sweet “thank you” or “I love you.” The sight of eagerly raised hands or a look that says, “I learned something today,” is instant reward.

After their two-year stint, fellows aren’t expected to continue teaching, whether in public or private schools.

Acosta, for one, is aspiring to become a beauty queen. After her fellowship, she plans to train rigorously for Binibining Pilipinas 2017.

“I have no intention of giving up being a teacher but I will definitely carry what I have learned as a fellow in my journey to becoming a beauty queen,” said Acosta. “My advocacy is to help leaders end educational inequity.”

AB Communication graduate from Ateneo, Johnet Grace Safranca Lopez, 21, a fellow at Kapit Bahayan School in Navotas, wants to become a lawyer and hopes to work for the Department of Social Welfare and Development or DepEd.

By April next year, the organization will have its first batch of alumni. To prepare them for their post-TFP life, career counselors met with fellows to discuss different job opportunities based on a personality test and the strong skills they displayed as teachers.

“Even if they go corporate, they might end up creating a CSR (corporate social responsibility) program that’s education-related. Or, if they go to law school, they could end up focusing on education reform law,” said Jerome Intia, director for marketing and events.

“This is what we mean by ‘education is everybody’s business.’ It’s not just about helping one sector. It’s about collaboration and nation-building,” Feria said.