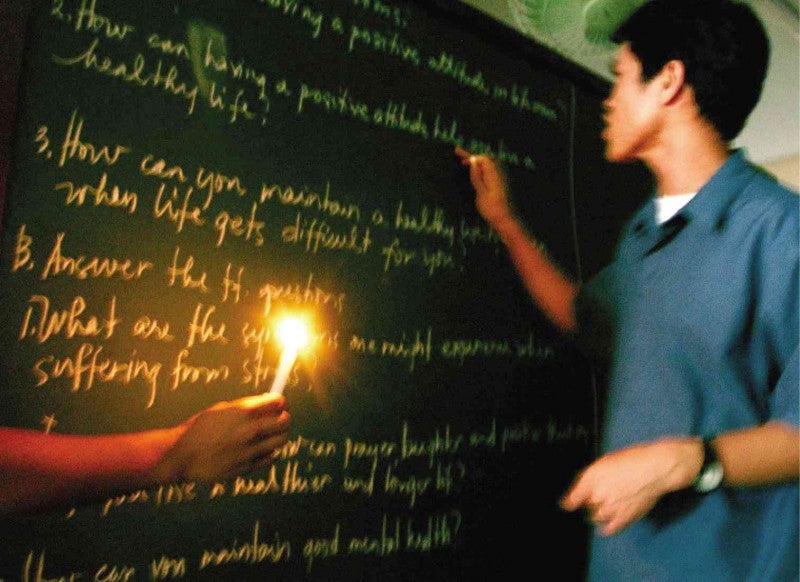 BROWNOUT A teacher in a nonformal education program in Pasig City holds a class by candlelight as the area is hit by a power outage. INQUIRER PHOTO

Energy Secretary Jericho Petilla has raised the alarm on an impending electric power shortage in the Luzon grid in 2015, projecting a reserve deficiency of 400 to 500 megawatts (MW) from March to May, which translates into two- or three-hour rotating outages.

Mr. Aquino’s letter said: “The DOE (Department of Energy) reports and projects a critical electricity situation in the summer of 2015 arising from among others, the expected effect of El Niño phenomenon, the 2015 Malampaya turnaround, increase and continuing outages of power plants and anticipated delays in the commissioning of committed power projects.”

Additionally, in various pronouncements, the energy secretary has proposed the additional contracting of 450 MW of solar power and 200-300 MW of wind.

The actions taken by government to respond to this possible short-term shortage should not load the system with expensive quick fixes that will be a burden on electricity consumers for a long time.

“Short-termism” and the narrow view of key stakeholders led by the authorities largely underlie this temporary thinness of reserves and possible outages in the summer months. These include:

More recently, there seems to be inconsistent and incoherent policies in which government is proposing every expensive solution to raise electricity supply, even as its regulatory arm is seen as flip-flopping on market pricing rules that make some of the existing peaking plants uneconomical to run, thus limiting supply.

In particular, we caution against quick fixes with lasting cost consequences that some participants in the power industry, including government, have put forward:

Government contracting for costly emergency power way beyond the expected three summer months per year over two years when thin reserves are foreseen. The supply situation in the summer of 2015 will have the added burden of having to cope with the nonavailability of Malampaya gas during the critical period.

But a short-term problem requires a short-term solution and any government contracting should be limited just to the period that it hopes to guard against blackouts. If the problem is projected to persist, then other long-term solutions must be found.

It is premature for government to consider acquiring “strategic” generation assets when it has not even completed the privatization process and still owns, among others, the CBK plants and Malaya.

The argument is made that outright purchase is not much more expensive than leasing for two to three years because of saving demobilization costs, but government may recall how little it received when it sold assets like the Limay and Dingle plants. How strategic are plants which cost P13-P15 per kWh to operate?

Costly take-or-pay 20-year contracts for intermittent unreliable power from solar (an additional 450 MW) and wind (an additional 300 MW) at high feed-in tariff rates of P9.68 per kWh and P8.53 per kWh. These are 2-year-old rates in a segment of industry where costs plunge quickly, being touted as incentives to solve the tight power supply instead of the blatant rent-seeking they really are.

At these rates and volumes, the incremental cost to the public by way of a higher power bill amounts to almost P5 billion annually. This will add at least another 7 centavos per kWh to the 4 centavos initially applied for to cover the cost differential.

The case of how these unreliable power sources address peak demand shortages in the system when supply depends on the whims of the sun and wind is for solar, at best tenuous, and for wind, nonexistent.

20-year windfalls have said wind at P8.53 is cheaper than

What they have not said is you pay the P13 per kWh to run the diesel plants only when needed while you pay P8.53 per kWh whenever the wind produces electricity whether you need it or not. There are no guarantees they will operate when you actually need them. So, you will still need the diesel plants for those times.

Hidden costs of RE

These additional investments in reserve power represent hidden costs of renewable energy, but they will get passed on to consumers by way of higher electricity bills.

Thus, resorting to renewable energy to address a short-term problem is cruel and expensive to the consumers: They will be paying for 20 years via higher electricity bills what can turn out, at the worst case, a three-month problem.

These quick fixes will ultimately hurt not only the industrial sector by eroding our competitiveness but also households.

Instead, we fully support the following initiatives already being implemented by the government and private sectors to address the immediate shortages.

Interruptible load program. The Interruptible Load Program (ILP) was initially proposed and applied for by Visayan Electric Co. (Veco) when rotating blackouts were common in the Visayas grid. The concept is to compensate customers with self-generation facilities to run their gensets for their own use, thus reducing overall demand.

This reduced demand allows the utility to allocate the limited grid supply among its other customers, averting or reducing blackouts. To its credit, the Energy Regulatory Commission (ERC) approved this not just for the Veco application but as a general scheme available to all utilities. It has been successfully applied in Mindanao as well.

Lifting of the secondary price cap. The secondary price cap was originally proposed by the generators themselves, as a way of preventing extended periods of high prices if tight supply persists. The principle though was that the cap would be sufficient to cover the marginal costs of peaking plants so they could continue to operate within the market mechanisms.

Instead, the ERC instituted a cap of P6.24 per kWh, which does not cover the costs of even the most efficient bunker-fired plant, let alone the diesel plants.

If we want to encourage ILP participants to supply power to the grid beyond their own self-generation, their costs, now set at around P14, must fall within the cap.

But the ERC wants these market participants to apply separately for cost recoveries above the cap. This process takes a long time and defeats the purpose of a functional market. A real market is self-financing and not dependent on extraneous cost recoveries.

Fuller utilization of government generation assets, especially Malaya. This plant was available during the price spikes in November and December 2013, when Malampaya was under maintenance, yet it was underutilized.

There were no blackouts then but greater use of the plant would have reduced the price spikes and avoided many of the knee-jerk reactions that now threaten the industry.

There appears to be doubts that repairs can be completed in time. Why this was not addressed earlier again brings to question the wisdom of giving government “strategic” generation assets.

Demand-side bidding in the WESM. Demand-side bidding enables a customer to choose not to draw power (or to be disconnected) from the grid when spot prices exceed a price threshold, which the customer bids for in the market. To make this happen, Philippine Electricity Market Corp., which operates the spot market, needs to start implementing the provisions of the customer-demand bids of the WESM rules.

Ancillary services procurement. Reserves are needed to balance demand and supply at every given moment through regulating reserves, while other reserves provide the first line of defense against blackouts caused by unplanned or forced outages.

Energy conservation. In the short term, it may be difficult to add to supply quickly, but demand is within every Filipino’s ability to control. The consumer controls the light switches. Reducing consumption is the alternative to increasing supply and has the added benefit of saving the consumer money.

Cutting out unnecessary use of electricity, using more energy-efficient lights and appliances, and shifting consumption off-peak hours all help.

But economics drives behavior. Prices have to reflect the costs. When gasoline is cheap, SUVs proliferate, but fuel-efficient cars sell well only when gasoline is scarce or prices are high.

Same with everything else, electricity included. We have to remind every Meralco customer that when Malampaya is out, even when there is sufficient supply, prices will go up because the substitute fuel used in place of natural gas is more expensive.

Roadblocks. Government needs to be more active in encouraging generation and supporting private developers in every way. Case in point is the 140 plus permits that are needed in constructing and operating a power plant.

The appetite is there but developers are running into roadblocks with “not in my backyard” advocates and unsupportive government units (e.g. the 600-MW RP Energy project in Subic is at least two years delayed, now pending judicial resolution of the writ of kalikasan).

Open access. Continue to lower the threshold for open access. This will encourage more generation as suppliers can look to end users as a competitive market and thus bypass distribution utilities, the monopoly segment of the industry. The power of choice, one of the key objectives of the industry restructuring, works both for the consumer as well as the supplier.

Guarantee unbankable coops. The National Electrification Administration (NEA) needs to provide guarantees with automatic features, like a bond or letters of credit that can be drawn to make some rural cooperatives credit-worthy.

This will need to go hand in hand with the NEA exacting financial and management disciplines on erring coops and stronger political will to cut off recalcitrants who feed off the system as they are effectively not market participants. Corollary to this, electric coops should also be strengthened institutionally through enabling capacity-building programs (e.g. financial, technical and good governance).

Smarter and firmer regulation. The DOE and the ERC have to manage the industry and market in a way that encourages supply responses from generators, the competitive segment of the market. They must also be proactive in ensuring that the monopoly leg, transmission under National Grid Corp., fully contracts what the system requires. The establishment of a reserve market has long been delayed.

In requesting emergency power, the energy secretary said the more grievous sin was not to do anything. We disagree. We think the greater sin is to do something costly but ineffective, or worse, harmful, while leaving unattended fundamental long-term constraints.