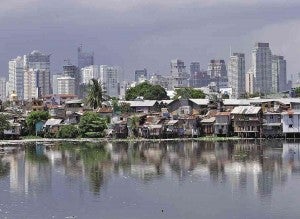 SKYLINE OVER POVERTY LINE The towering buildings are at the heart of Makati City, while the shanties are along an estero in Pasay City. RAFFY LERMA

From whatever angle one views it, Makati City is a bundle of contradictions. It is home to the ultrarich as well as to the extremely poor. Gleaming skyscrapers tower above the dilapidated hovels of slum dwellers. Modern firms operate within a territory controlled by a political family that has wielded power continuously for 28 years.

Makati is the Philippines’ financial capital and is host to some of the world’s major conglomerates. Banks, telecoms, investment houses, hotel chains, and high-end shopping malls compete with one another in a high-stakes pluralism emblematic of modern capitalism. Makati’s executive class articulates an ethic of efficiency, transparency, and accountability suitable to both corporate and political governance.

Yet, the city’s political system has more in common with provincial fiefdoms run by local warlords than with rule-bound metropolitan governments administered by technocrats. Except that Makati has more money than any other city or town in the country. Its gigantic share of the national taxes, called the Internal Revenue Allotment or IRA, is more than enough to provide for all the basic needs of its mass constituency. The taxes it collects on its own from the different enterprises operating in its jurisdiction allow Makati to operate a public hospital and a university, and to overspend on facilities like the Makati City Hall Building II without fear of ever running out of funds. All this has little to do with sound governance practice. Makati’s government remains feudal, dynastic, premodern, and—from what one might glean from the ongoing Senate investigations—hopelessly corrupt.

How does an economic system that is supposed to thrive on transparency, the enforceability of contracts, normative stability, and professionalism function in a political setting where—to get things done—one must be prepared to enter into opaque transactions, deal with quirky leaders, and operate under shifting rules?

There is no easy answer to this question. But the explanation that quickly comes to mind is that the economic system learns to adjust by factoring in the costs of doing business under such conditions. This basically entails cultivating smooth interpersonal relations with the political bosses by, for example, supporting them with generous campaign contributions during elections. On a daily basis, this also means setting aside funds for contingent expenses incurred in the course of securing various kinds of permits and clearances from the city government.

Things can get a little complex when these additional expenses have to be explained to foreign partners or to the home offices of multinationals. One can only assume that, in general, pragmatism rather than strict adherence to moral precepts becomes the guiding norm for doing business in such settings. Some companies may try to insulate themselves from these burdensome aggravations by seeking protection from higher centers of political power. But that, too, can be very costly. Others may simply opt to move out of the city.

In the long term, there is really nothing the business community can do to change the rules of the game in Makati. As a political enclave run along patron-client lines, its system of governance is ultimately determined by whoever commands the popular vote. Modernist politicians may try to offer an alternative to the likes of the Binay family. But so long as Makati’s poor outnumber its more educated voters, they have little chance of getting elected. Indeed, Binay’s version of the welfare society in Makati is held up as a model of governance for the rest of the country.

This is not to say that traditional governance such as the Binays represent will never change. The impetus for change is bound to come from within the system itself. In the distribution of the spoils, some political allies may feel left out. Others, like former staunch Binay loyalist Ernesto Mercado, who, as vice mayor, had looked forward to succeeding him, thought he was unfairly shunted aside to make way for Binay’s son. Mercado could not counter the political clout of the Binays, but he knows enough about the way the Vice President and his family run Makati’s affairs to be able to derail his presidential ambition. This is evident from Mercado’s damning testimony against the Binays in the Senate hearings on corruption in Makati.

The hearings have shown that if so much money has been siphoned off from the public coffers through various modes of corruption, it is likely to come out in the form of financial assets or pieces of tangible property like that opulent English-style estate in Batangas. If these have been declared in the statements of assets, liabilities and net worth required of public officials, then their provenance will have to be explained. If they have been concealed through layers of dummies, holding companies, and trust accounts, former close associates, like Mercado, are bound to know them.

We don’t know what kind of defense the Binays can offer to counter the allegations of corruption that have been hurled against them. But it has to be more convincing than merely asserting that all these are politically motivated and should be filed before a proper court. To say that these accusations are politically motivated does not invalidate them. It only means they should be answered in both the sphere of politics and of law. Voters nationwide may opt to ignore these allegations, in which case there is no stopping Jejomar Binay from becoming president in 2016. And, if our modernity is as illusory as Makati’s, then he would most likely get off the hook legally as well.