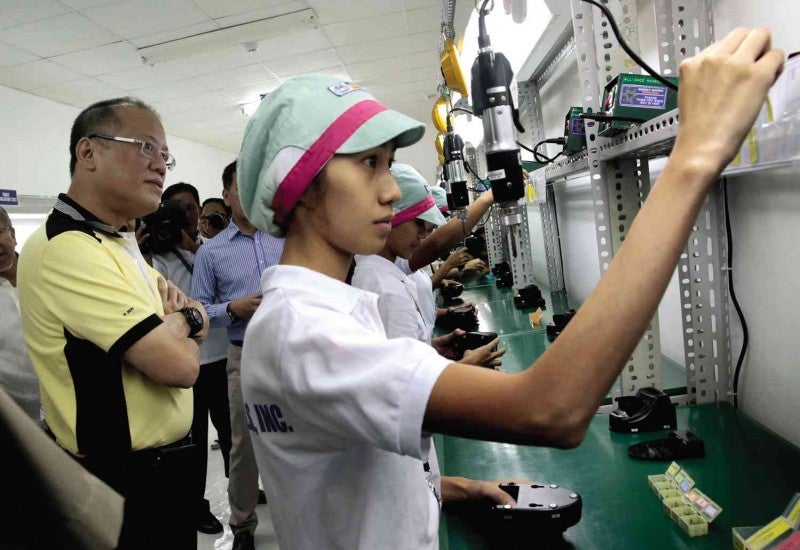 Investment in capital formation for durable equipment accelerated from 7 percent in 2012 to 15.5 percent in 2013. In the second quarter, this slowed down to 8 percent, but hopes for more investments remain strong as investors search for new locations given the rising costs in China, tension between Japan and China as well as the political instability in Thailand.

In terms of contribution to employment, the whole industry sector (of which manufacturing contributes the bulk) accounted for 15.9 percent last July, up from 15.7 percent in 2013.

Goods exports recovered, as growth picked up by 10 percent in the second quarter from -8.8 percent in the same quarter of 2013, driven mainly by electronic data processing and garments.

Expectations of the Philippines as Asia’s rising star and breakout nation remain. As indicated in the chart which compares the country’s manufacturing growth with China, Thailand, Indonesia and Vietnam, the Philippines registered the highest growth in 2013.

If industry would be able to maintain its double-digit growth, manufacturing is poised to become a key driver of growth and source of more and better jobs. 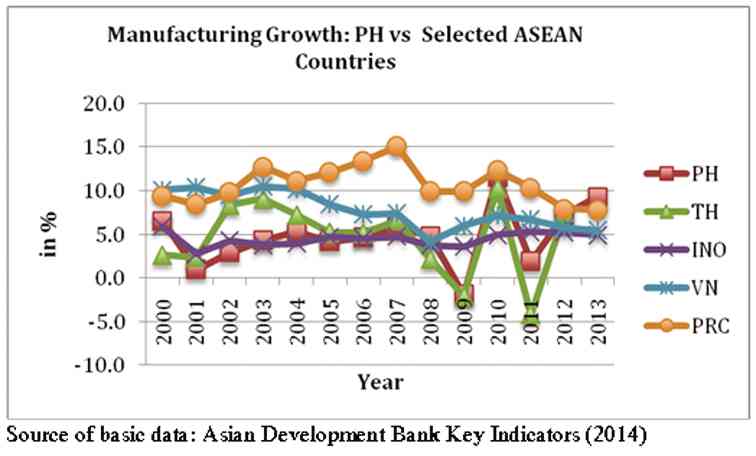 The success of the Aquino administration’s governance reforms has led to the economy’s recent strong performance. Moreover, the following characteristics have differentiated the Philippines from its Asian neighbors:

Market opportunities: Increasing incomes, rising middle-class, a demographic sweet spot due to the rising share of the population joining the labor force and increasing spending capacity

Policy focus: New industrial policy that aims to improve the competitiveness of industries and a more proactive government that acts as coordinator and facilitator in addressing constraints to industry growth and development

To revive the manufacturing industry, the Department of Trade and Industry (DTI) has been actively coordinating with industry associations since 2012 for the formulation of industry road maps.

The focus on a new industrial policy is crucial not only to enable the Philippines to take advantage of the opportunities from the Asean Economic Community (AEC) and address the threats and challenges arising from it, but also to create jobs and attain a sustainable and inclusive growth as reflected in the country’s Philippine Development Plan.

Philippine experience over the last two decades has shown that the country cannot leapfrog to industrialization and cannot rely on the services sector alone to achieve inclusive growth.

For growth to be inclusive, a strong manufacturing industry is needed. Manufacturing offers the opportunity for a wide range of jobs requiring high-skilled, semi-skilled and low-skilled workers. 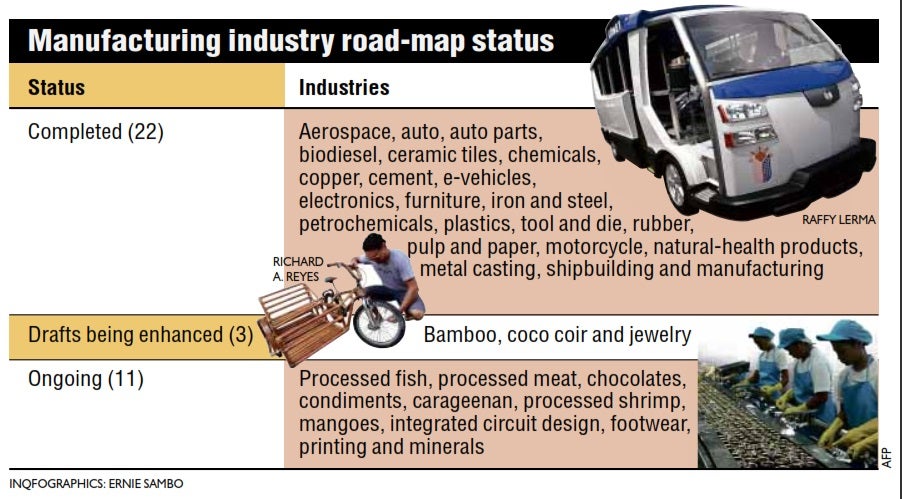 Aligned with the efforts of the DTI, the Department of Budget and Management allocated P2.3 billion in 2013 to the Manufacturing Resurgence Program.

It is a new program that has been crafted to help achieve the goals of the Philippine Manufacturing Industry Roadmap through projects that would be implemented by agencies like the Department of Science and Technology (DOST), Department of Labor and Employment (DOLE), Technical Education and Skills Development Authority, Commission on Higher Education, Department of Energy and Philippine Coconut Authority.

To institutionalize the implementation of the road map, the DTI established the Industry Development Council composed of representatives of various government agencies, private sector groups, academe, a research think tank and labor.

The council will serve as the top policymaking body for industry development. It will coordinate and monitor the implementation of the road map and recommend policies and programs to address constraints to manufacturing growth and development.

At the industry level, the Board of Investments (BOI) has formed technical working groups (TWGs) to serve as venues for discussing issues and coordinating industry policies and programs.

TWGs are composed of industry champions from both the BOI and the industries as well as representatives of government agencies.

Their work focuses on addressing government policies and measures that make it difficult for industries to achieve their road-map goals, along with formulating and coordinating industry support programs to address issues, such as human resource development, lack of skilled workers and industry supply-chain gaps.

Currently, there are 18 TWGs tasked with coordinating and monitoring the implementation of the completed road maps.

A total of 22 manufacturing road maps were submitted to the DTI-BOI. There are three that are being enhanced (in terms of updating the data and further analysis) while 11 industries, mostly from the agribusiness sector, are in the initial process of road-map formulation.

At the heart of the Philippine Manufacturing Industry Roadmap for Structural Transformation is the development of the automotive industry through its integration into the production and sales systems of global automakers.

Car manufacturing is a highly global and a high-tech industry. It is capital-intensive and requires economies of scale in order to make its operations profitable.

A car has over 30,000 parts and is strongly linked with metal, chemicals, plastic, textile, rubber, glass, steel, electrical and other manufacturing subsectors.

Hence, in terms of interindustry linkages or supply-chain impact, auto manufacturing has one of the highest multipliers based on input-output analysis.

Though the country’s current domestic production is still limited, there are clear opportunities for greatly increasing scale due to the country’s growing middle class and the AEC integration which represents a market of over 600 million people.

The third wave of Asean motorization is also expected to take place in the Philippines by 2016. The market is expected to reach a volume of 500,000 by the early 2020s.

The goal of the Comprehensive Automotive Resurgence Strategy (CARS) Program is to attract foreign direct investment (FDI) in both the assembly of new models and strategic-component manufacturing to enable the country to deepen its participation in the global value chains of multinational companies.

In this new form of industrial organization, suppliers usually follow where assemblers locate their production. This has been shown by the experiences of emerging markets (China, Brazil and Thailand) where the massive inflows of FDI into assembly have also attracted many new component companies that are following the FDI of their major customers.

To achieve the same, a comprehensive mix of policies will be crafted to include demand stimulating policies and effective implementation of regulations affecting the industry.

With new investments in the industry, the CARS Program could not only catalyze growth within the industry but also drive broad-based manufacturing growth and economic transformation in the country.

Learning from the experiences of other countries, Thailand, through its industrial policy, was able to successfully integrate its automotive industry into global automakers’ networks.

The implementation of the manufacturing subsector road maps would remain in the hands of the private sector, and together with investment and entrepreneurship would be the proximate source of growth.

DTI’s role is to act as a facilitator in addressing the most difficult challenges that prevent the entry of firms into manufacturing and hinder the latter’s integration into the global value chains of multinationals.

The new industrial policy, to be carried out in a market friendly way, seeks to create an environment that strengthens industries. The goal is to help markets work better by focusing on investment strategy, value and supply chain, effective regulation, education and industrial clusters to reduce transaction costs.

For the first time, the stars have aligned for the development of the Philippines. This is evident in the growing interest of both foreign and local investors who are seriously looking at the Philippines as Asia’s new rising tiger.

With the effective implementation of the Aquino administration’s new industrial policy and continuing governance reforms, the recent rebound in manufacturing growth tends to show that this is not just an uptick or a short-run blip but could be an indication of the Philippines experiencing a manufacturing renaissance.

(Rafaelita M. Aldaba is an assistant secretary of the Department of Trade and Industry-Board of Investments. E-mail: fita.aldaba

Read Next
Flagged
EDITORS' PICK
MECQ guidelines in infographics
PNP: Checkpoints back in MECQ areas
Smart 5G goes live
Water remains our saving grace right now
Health workers from other regions eyed as ‘substitute’ for NCR frontliners
A gem of a residence in the new normal
MOST READ
MECQ guidelines in infographics
MECQ in NCR, other areas: Mass transportation suspended, quarantine pass required anew
Doctors group to Duterte: ‘There was never a call for a revolt’
Want higher pay? Join the police force, Duterte tells nurses
Don't miss out on the latest news and information.

Health workers from other regions eyed as ‘substitute’ for NCR frontliners