Story of our power woes 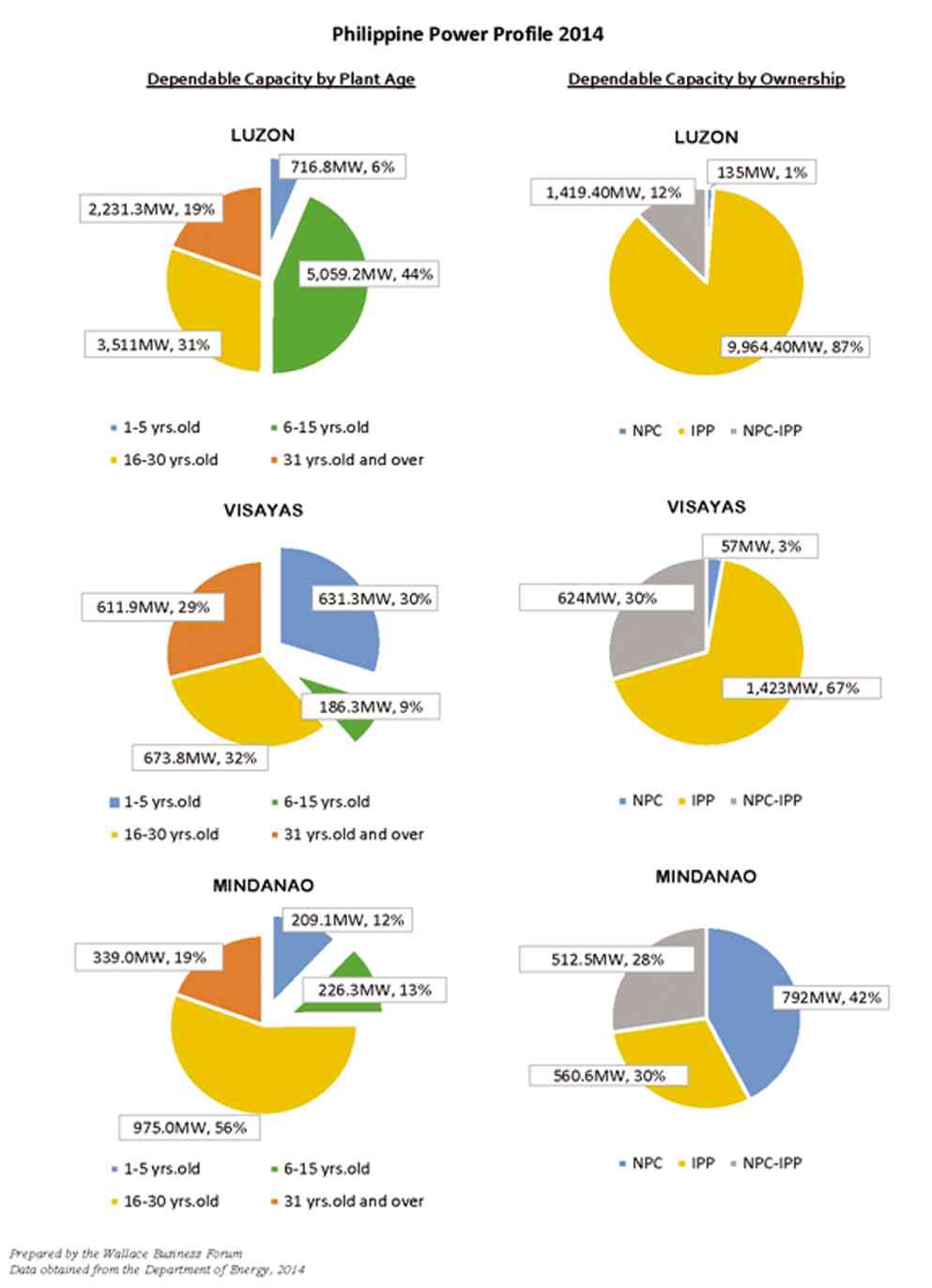 Energy Secretary Jericho Petilla has recommended emergency powers for President Aquino to give the country additional supply of electricity. In the face of a looming shortfall in 2015, Malacañang has asked Congress to grant Mr. Aquino the extra powers.

Do we really need emergency powers for the President?

The answer is “yes”—if everyone continues his old ways.

The answer is “no”—if everyone is prepared to change and to pitch in.

It’s a wise precaution because we may have just enough power in the second quarter of next year—the critical period. But any kind of breakdown or excessive demand will result in a shortage. So, Petilla is taking a wise precaution.

But there are alternatives.

2. Rehabilitate the Malaya plant more quickly so it can operate reliably and efficiently. It is being done.

But unless repair work can be speeded up, a rehabilitated plant won’t be available in time for possible blackouts in the second quarter next year. And think ahead as it takes 8 to 13 hours to bring the plant into full operation. Perhaps, it should be privatized with conditions on how it must operate. Discussions are ongoing to do this, too.

3. Get those with standby generators to agree to run them if and when needed—the Interruptible Load Program.

For the longer term, we need to convince the courts not to accept writs of kalikasan or issue temporary restraining orders.

In addition, the executive branch must override objectors and approve national and local permits in days, not months, even years. More than 160 signatures are required for the permits. Absurd.

Strong political will to force action is all that’s needed. The bureaucracy needs its butt kicked to perform quickly, and eliminate the complex and unnecessary procedures.

The Philippines has been hailed the next “Asian miracle” by World Bank president Jim Yong Kim because of the optimism the bank has for the country’s economic prospects.

Overall the global economic growth forecast has been reduced from 3.2 percent to 2.8 percent, but for the Philippines it has been kept at 6.4 percent for this year.

This is nice to hear, but the important point is sustainability. That needs infrastructure. And in an era that depends on electricity to do business, power is critical.

The current Philippine power infrastructure cannot support a 6-percent growth let alone the 7 percent plus being hoped for without effectively increasing supply of electricity by at least 13,000 megawatts (MW) in the next 15 years.

The facts are:
Power reserves are too small and shrinking. And tight reserves leave no room for system failure.

Balancing reserves between available supply and power demand is difficult and has not been well-handled to date.

Old plants need regular maintenance. And not too far in the distance, replacement.

To spread growth, electrification has to be expanded throughout the country.

2. Improve governance, efficiency and management of the power sector.

Not enough new power plants are being built as fast as the increase in the demand for power, as projected reserves are noticeably thinner than needed for the whole Philippines.

With these thin reserves, a breakdown of just one or two plants will result in brownouts. Given that 21 percent (3,182 MW) of the country’s total dependable capacity comes from plants more than 30 years old, breakdowns will occur. It would be wise for anyone who must have continuous power to have a backup system.

Aside from addressing thin reserves, the country’s power transmission system also needs rehabilitation and expansion for it to handle congestion in the grid and to be able to support the growing demand for power and the entry of new generators. With a good delivery system, the reliability and quality of power are improved.

Also needed is for the archipelago to be fully interconnected and for loop systems to be developed.

NGCP will establish a 230-kV Cebu-Negros-Panay line in the Visayas grid to strengthen the backbone since the current radial configuration is very long, making it prone to grid failure by any incident along the line.

For the Mindanao grid, NGCP plans to upgrade old substations that need immediate attention. Although Mindanao looks to have a stable power situation in the next four years, it badly needs additional transmission facilities.

A major transmission project that the government has been eyeing for over 30 years is the Leyte-Mindanao Interconnection Project (LMIP). This 400-kilometer project would connect the Mindanao and the Visayas grids. But it still remains (30 years remember) under study.

Which of the two routes to take may be submitted to the Energy Regulatory Commission (ERC) by end-2014 or early 2015. Heaven alone knows how long the ERC will then take to decide.

But why does it take the government 30 years to decide, let alone construct a transmission line and approve the construction of a power plant in more than three years?

In the Wallace Business Forum’s Quarterly Roundtable, the Department of Energy (DOE) pointed out that 165 signatures were needed to get the permits to build plants!

Yes, you read it right: 165. This red tape entangled all over the country’s future power infrastructure is jeopardizing its potential growth. There is enough interest to build plants in the country, but building a power plant takes at least three to five years. Many times it is longer than that to even get approval to get started.

Another problem is the inconsistency in the decisions made at the local government unit (LGU) level brought about by frequent changes in leadership (governors and mayors), with different interests or priorities. As Petilla said, “We need full-time jobs working in LGUs (to handle power projects).”

What is needed is a specialized independent unit at the local level composed of professionals who can handle approvals and monitor construction.

Is the Philippine power infrastructure system on par with its neighbor countries?

In terms of capacity and cost, it is not. In terms of management or governance, it is also a resounding “no.”

Looking at countries similar to the Philippines in terms of economic and geographic profile is revealing.

The Department of Trade and Industry wants to revive the manufacturing sector but with these cost differentials and the current status of power infrastructure how can that be possible? Power is a major cost for a factory.

The Electric Power Industry Reform Act of 2001 (Epira) has covered the important elements in reforming the country’s power sector. The law has five main objectives:

Of these five, lowering electricity rates and increasing supply and reliability of power seem to be the most difficult for the governing bodies to implement.

Petilla has mentioned that balancing reserves (which consequently lowers power rates) is difficult because of our geographic profile. The balancing of reserves is a common problem in other countries, too. But the advantage of other countries is their geographical location.

Thailand, for example, is a landlocked country so it can easily import needed power from other landlocked countries like Laos and Myanmar. Location is also one of the reasons behind the high power rates in the Philippines.

NGCP and Manila Electric Co. (Meralco) have plans for upgrading the supply and reliability of power but the main bottleneck is at the local level—in getting permits and approvals.

Malacañang has asked Congress to approve the emergency powers to enable it to contract up to 500 MW of new power to be available on a contingent basis should these be needed in the second quarter of 2015.

Petilla said he was recommending the additional capacity of up to 500 MW instead of just 200 MW to provide a buffer in case the projected deficit becomes bigger.

Epira prohibits the government from constructing power plants. However, Section 71 of the law states that the President, upon determination of an imminent shortage of supply of electricity, may ask Congress for authority, through a joint resolution, to establish additional generating capacity. This would cost more than P6 billion.

But there’s a much cheaper alternative and it’s already available: Tap existing private generators. The government has started to do this through what is called the Interruptible Load Program (ILP). The ILP involves deloading (removing) of large power users from the grid and using their own power generation facilities to supply their own power needs during shortages.

The distribution utilities will reimburse these users the differential to cover their fuel and maintenance cost. They’ll only be needed for short periods anyway. The ILP in Luzon was readied in June and actual operation started in July.

In the week of Typhoon “Glenda,” the DOE reported that some Meralco customers deloaded 110 MW from the grid. It was estimated that as much as 1,500 MW could be available, more than enough to avert any brownouts.

Aside from the ILP, another program that the government hopes to implement to temporarily ease the grid’s supply situation is a reserves market. There is untapped capacity of power plants that could be used but a mechanism to do it is needed.

That mechanism is a reserves market under the Wholesale Electricity Spot Market where NGCP could contract and transmit those untapped reserves. Simulations were completed in September, but the ERC has yet to approve the pricing and cost-recovery scheme.

According to the DOE, there are other projects and programs with ongoing feasibility studies that will help improve the power situation. However, the DOE declined to give additional information. So, we’re left guessing what it might be.

The future is bleak. The Luzon grid will have an 11-percent reserve in 2015 and 2016 but it goes way down from there, unless new projects are built, starting now.

The Visayas has a 21-percent buffer in 2015, 19 percent in 2016 and 13 percent in 2017, but this shrinks to 6 percent in 2018. The Mindanao grid will have sufficient reserves as long as committed projects are implemented as planned. Otherwise, reserves could fall to a low 7 percent by 2020. It’s all too close to the edge.

The programs being implemented right now are only short-term solutions. There’s little attention being given to longer term and more permanent solutions. Power plants just aren’t being built. New plants and replacement plants must be approved immediately.

The roadblocks must be overcome or longer periods of blackouts become inevitable. Investment in factories (where the jobs are) won’t occur and the hoped for gross domestic product growth of over 7 percent won’t be achieved.

It’s all up to government to do the right thing. With urgency.

(To download the full version of this report and other Wallace Business Forum reports, visit www.wallacebusinessforum.com or e-mail [email protected])

Natalie Portman surprises fans after beefing up for ‘Thor 4’