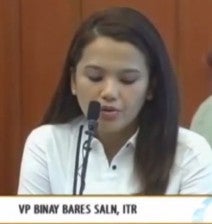 A female lawyer representing Vice President Jejomar Binay fainted—in front of television cameras—while trying to explain how the latter acquired the P60 million declared in his statement of assets, liabilities and net worth (SALN). Binay’s mouthpieces said she had “stage fright.”

A lawyer having stage fright? Almost every day, lawyers argue in public, before judges and fellow lawyers, witnesses and complainants in cases being tried by the courts. They should be used to appearing and speaking in public. In law school, they are taught how to argue their cases. There are mock trials where they hone their skills in argumentation. There is even a television show where law students argue their cases before a broadcast audience. A lawyer so afflicted by stage fright as to make her faint is not credible, in the same way that Binay’s protestations of innocence vis-à-vis accusations of corruption are not credible.

Some observers joked that perhaps the lawyer could not stomach what she was being forced to say to defend Binay’s wealth.

Binay himself attributed his P60-million net worth to his wife’s flower shop and his piggery business. There you have it, folks: Open a flower shop and raise pigs and you can be a multimillionaire without dipping your hands into public funds.

Because of the flower and piggery businesses, according to the VP’s lawyer, the Binays were able to acquire 11 pieces of real estate worth P13.8 million. Among these are a house and lot and another lot in San Antonio Village in Makati, six residential lots in Muntinlupa, Laguna and Batangas, and three parcels of agricultural land in Laguna, Bataan and Isabela. He also has two expensive SUVs worth P11.6 million—a Club Wagon and a Land Cruiser. Wow!

Erap said he had told Binay that the two of them have parallel careers: “I was the longest-serving mayor of San Juan; you are the longest-serving mayor of Makati. My wife is a doctor; your wife is also a doctor. The children from both of our families became mayors, congressmen and senators. I became vice president; you also did. I became president and was imprisoned. If you become president, you will also be imprisoned.”

Others in the audience suggested the best presidential-vice presidential team for the 2016 election. One said a team-up between Bayani Fernando, former chair of the Metro Manila Development Authority, and Sen. Grace Poe would be popular, like a blockbuster action movie. The team-up will then be called “Fernando-Poe.”

Why not “Erap-Poe”? asked the former action star. “That would be an even bigger blockbuster.”

Joseph Estrada and Fernando Poe Jr. were the most popular action stars during their time. They were not only bosom buddies but were also compadres. It was FPJ who coined the name “Erap,” which is “Pare” spelled backward. Together they successfully fought the Big Four crime syndicate that was preying on show biz folk.

FPJ helped Erap when he ran for president and Erap helped FPJ when the latter also ran for president but was believed cheated by Gloria Macapagal Arroyo. Erap and FPJ action movies were always popular with the people and became box-office hits. Would not an Erap-Poe political team-up also be popular and a hit with the people? How can you argue against logic like that?

The dismissal by the Supreme Court of Sandiganbayan Justice Gregory Ong for acts of impropriety should serve as a warning to other justices and judges. Ong fraternized with alleged pork barrel scam queen Janet Lim Napoles during her heyday and was believed to have been partial to her in a case tried by the Sandiganbayan. Ong was found to have met twice with Napoles in the latter’s office. The high court found Ong guilty of grave misconduct, dishonesty and impropriety, and immediately dismissed him.

Ong petitioned the high court to let him retire, but it showed no mercy. It dismissed him, effective immediately, even while a motion for reconsideration is pending, forfeited all his retirement benefits, except for “accrued leave benefits,” and banned him from ever holding public office again.

It turned out that Ong was not a first-time offender. He and a fellow Sandiganbayan justice had been found liable for misconduct in 2011 and fined P15,000 for “unbecoming conduct.”

That punishment did not teach Ong a lesson.

Ong was almost appointed to the Supreme Court, but the tribunal ordered him not to accept the appointment because of doubts on his citizenship. It was alleged that Ong is not a natural-born Filipino, which is a required qualification for justices of the high court. He returned to the Sandiganbayan where he had the bad luck of associating with Napoles.

Ong’s sorry fate should serve as a reminder that justices and judges should be, like Caesar’s wife, above suspicion.