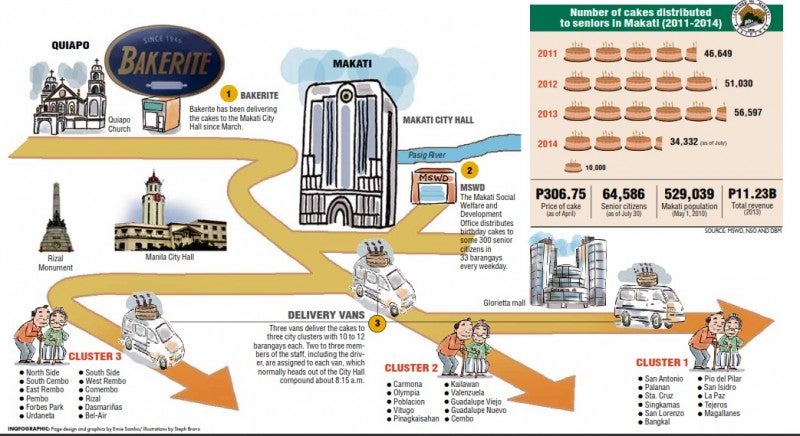 The cakes that the Makati City local government gives out to its senior citizens on their birthdays are made in Quiapo, Manila.

From its bakery at 923 R. Hidalgo St., Bakerite has been delivering the cakes to the Makati City Hall since March about 7:30 a.m. every day, replacing Cups and Mugs Kitchenette.

Sonia Delmo, 42, has gotten used to reporting for work 30 minutes before 8 a.m. just to count the more than a hundred cakes bound for a cluster of barangay.

Delmo is one of the six clerks from the Makati Social Welfare and Development Office (MSWD) who distribute chiffon cakes to around 300 senior citizens in the city’s 33 barangays every weekday.

“We have to make sure the cakes are complete because the seniors are already expecting them during their birthdays,” she said. 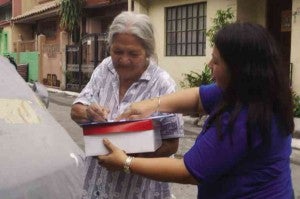 Residents 60 and above—from those in exclusive villages like Bel-Air and Forbes Park, to those in Barangays Rizal, East and West Rembo, and Pembo, where most of the city’s poorest live—receive a round chiffon cake the size of a regular luncheon plate.

The Bakerite cakes are priced at P306.75 each, as shown in the receipt handed by the supplier to officials of the social welfare department. The previous supplier prepared smaller cakes at P180 each.

The cake-giving program started in 2003, when Vice President Jejomar Binay was still mayor. It was former social welfare head Marjorie de Veyra who pitched the idea.

“There might have been an instance when the mayor brought the cake to a senior citizen. From there, De Veyra thought, ‘Why don’t we give birthday cakes to senior citizens?’” MSWD officer in charge Ryan Barcelo said.

Florence Ferrer, head of the MSWD Elderly Welfare Section, said the change was made last year. The cakes “really come from the people of Makati,” she said.

Three vans deliver the cakes to three city clusters with 10 to 12 barangays each. Two to three members of the staff, including the driver, are assigned to each van, which normally heads out of the City Hall compound about 8:15 a.m. 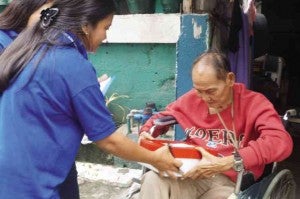 Delmo, along with Rowena Hernandez and driver Petronilo Patag, was tasked with distributing cakes to 98 seniors in Cluster 3.

The Inquirer joined Delmo’s team on Aug. 29 in delivering the cakes. After a 25-minute drive from City Hall, the team arrived at South Cembo, Del Pilar. She pointed to the house of 62-year-old Teresita Hamili.

“After nine years of delivering cakes, I already memorize the houses of the seniors,” she said.

Seven houses from Hamili’s is the home of 83-year-old Michael Angelo, who, despite his frail body in a wheelchair, managed a wide smile as he received his birthday cake.

In 40 minutes, all the 12 senior celebrators in South Cembo received their cakes.

The group proceeded to Barangay Comembo, where 65-year-old Rosa Rubio was waiting for the cake. “The cake got bigger,” Rubio said. “It was small before. Maybe we can request a branded cake next time,” she added jokingly.

All the staff members are usually back at City Hall by 5:00 p.m.

In case the beneficiaries are not home, the cakes can be received by relatives, Delmo said.

But for elders who relocated or lost touch with their families, the cakes will be held by the city staff.

“Assuming that we cannot locate 10 senior citizens, we give their cakes in advance to those in the following batch of beneficiaries,” Barcelo said.

The celebrators can call the social welfare office the next day or City Hall can locate the senior citizens as soon as possible.

“It’s very rare that the cakes are not claimed by the seniors or their families [on a later date],” Barcelo said.

For those who died within the year, their families can still receive the cake but their names will be removed the following year. 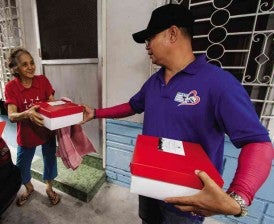 “Cakes for golden anniversaries are bigger than those for birthdays,” Barcelo said. “It’s not on a daily basis since it seldom happens in a year.”

The cake delivery project is a component of the city’s BLU Card program that provides benefits, like medical, cash and burial assistance, to senior citizens.

As of July 30, there were 64,586 BLU cardholders; 97 percent were “active.” Of the total, 1,728 were marked “hold,” or were unlocated. They either could have moved, are missing or are dead but undeclared.

The Makati government classifies the elders’ BLU Cards into color codes. Stickers are placed on these to serve as status indicators—blue means “active,” yellow means “disabled” and red means the citizen is “old-aged,” or at least 80 years old.

Many of the senior citizens were not aware that the cakes were bought with taxpayer money.

“I just accept whatever they give me,” said Estrella Lagartos, 64, from Tejeros. “I don’t know who gave it. All I know is that it came from City Hall.”

Guadalupe Nuevo resident Roberto Lagahit, 70, said he thought the cakes were from Makati Mayor Junjun Binay because the cakes from previous years had a card showing they came from him. 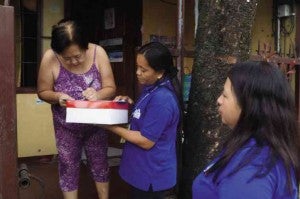 Lourdes Bartolome, 63, wondered why lawyer Renato Bondal had claimed that the cakes were overpriced at P1,000 each. “Why would he even raise that [issue]?” she said.

Bondal, a Makati resident, has filed a plunder case against Mayor Binay and his father, the Vice President and formerly the mayor of the city, in connection with the allegedly overpriced P2.3-billion Makati City Hall Building II, or the parking building.

“If I don’t get a cake this year, I will personally ask one from him (Bondal),” Bartolome said.

But some seniors think that the government could choose more relevant projects.

Alfredo Dulce, 69, is a street sweeper. He told the Inquirer that he appreciated the cake but would find it better if the local government could provide him a stable job.

“It’s good that they are giving us (seniors) free cakes but I wish they would also give us free medicines,” Virano said. “I hope we’re still alive when that time comes.”

Lorenzana: US weapons preferred but cost steep for PH