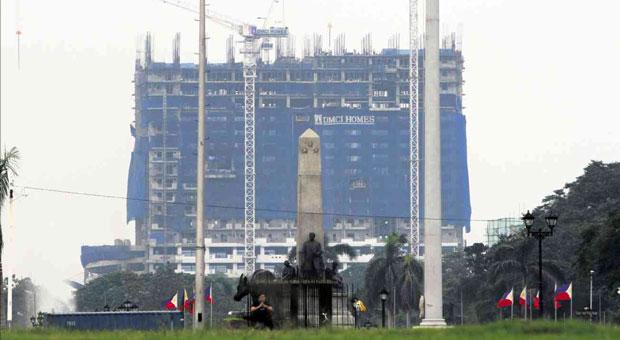 RIZAL IN CONDO’S SHADOW The construction of the Torre de Manila, which mars the view of the Rizal Monument in Manila, continues despite calls from various groups to stop the building. INQUIRER FILE PHOTO/EDWIN BACASMAS

That’s how Change.org brilliantly describes it. “Photobomb” is, of course, how this selfie generation calls the act of intruding into a picture one is taking of oneself through a cellphone. It’s not limited to selfies, because “photobombing” can happen in pictures one is taking of others, with the “photobomber” doing something cute or zany or attention-grabbing in the background. It can happen as well on TV, such as when an NBA player is being interviewed after a win and a teammate barges in in the background and does something outlandish.

“Pambansang photobomb” is how Change.org calls the DMCI Torre de Manila, which is being built near the Luneta. The group charges that the building obstructs the vista of the Rizal Shrine because it looms in the background against Rizal’s statue. As photobombs go, that is the mother of photobombs.

The tower was never supposed to have been a tower at all. In June 2012, DMCI got a zoning permit that allowed it to build only seven floors. It soon applied for an exemption to build beyond that, which it got from the Manila Zoning Board of Adjustments and the city council last January. How it got it, only they can say. But more to the point, DMCI did not wait for it but went on to build past seven floors way back in 2012.

“What that means,” says Pia Cayetano, who chairs the Senate committee on education, culture and the arts, “is that from June 2012 to January 2014, DMCI was in bad faith. So to me the law is very clear: If you are in bad faith, you pay for the damages of whatever cost you incurred and whatever further damages to the environment are and to other persons.”

The people seeking damages include the National Commission for Culture and the Arts, the National Parks Development Committee, the National Historical Commission of the Philippines, and the Knights of Rizal, among others. They want construction to stop immediately. Even more than that, they want the building demolished.

My sympathies are entirely with them.

At the very least, the Torre de Manila is, if not a Tower of Babel, a Tower of Folly. It’s a case of killing the goose that lays golden eggs in the hope of finding the golden eggs wholesale stashed in the insides of the goose. The point of building the Torre, which has climbed from the original seven stories to a planned 46 stories, next to the Luneta is obviously to capitalize on the Luneta being a premier tourist spot. It’s like the Eiffel Tower: You don’t visit Paris without visiting the Eiffel Tower. You don’t visit the Philippines without visiting the Luneta, home of the Rizal Shrine, quite apart from being the vantage point to view golden sunsets in nearby Manila Bay.

But the very same 46-story tower despoils the view and detracts from the touristic appeal of the place. In lieu of romance, you find commerce. In lieu of history, you find currency, in every sense of the word. In lieu of aesthetics, such as the figure of the national hero etched against an open horizon, you find bad taste, with its suggestion of crass profit overshadowing and looming, towering over heroism.

Gemma Cruz has a point when she wonders how the same people who can appreciate the value of heritage sites abroad cannot do the same thing here. “The owners of these big companies, they went to the best schools in the Philippines and abroad. They’re the ones who travel abroad very often. And they’re the ones who marvel at the conservation works done in Europe, even in China, in Malaysia, Singapore. Why can’t they apply it here?”

Which is impossible anyway because there’s a height limit to buildings in Paris, as there is in other European cities. For many reasons, such as to prevent them from overwhelming the skyline and clashing with older structures.

At the very most, the point of highlighting a national shrine or giving it the importance it deserves is not just to make it attractive to tourists, it is also to make a nation’s inhabitants remember their past, appreciate their heroes, value their heritage. This country being especially forgetful of its past, or oblivious of what it took to make them what they are—wasn’t it Rizal himself who said “Ang hindi  marunong  lumingon  sa  pinanggalingan,  hindi  makakarating  sa  pinaroroonan (Those who cannot see where they came from won’t get to where they are going)”?—the last thing we need is a cynical or mocking commentary about the shrine dedicated to him.

I still remember the old joke about why Rizal’s statue is patrolled by two guards, the answer to it being that Rizal might slip away at night and partake of the delights of Ermita’s red-light district. At least that red-light district wasn’t obtrusive the way the Torre de Manila is. And it was colorful in its own garish, Toulouse-Lautrec way.

I miss it as well, it has disappeared over the years, giving way to the march of—what else?—tall buildings. The only thing red there now is the stop sign in traffic lights blinking forlornly in the night. Not every building represents an advance, often enough it represents retardation. Not every tall building suggests a soaring of the spirit, often enough it suggests the stunting of it. The Torre de Manila is so.

The “Pambansang photobomb” is so.