… [I]t is the duty of the State … to promote people’s welfare, assuring everyone of equal economic opportunity, wholesome living conditions, a chance to work for a decent livelihood, a fair share of the fruits of the country’s material progress and the enjoyment of a standard of living in accordance with the basic needs of self-respecting intelligent men.”–President Manuel L. Quezon of Baler (“Filipinos of Today, Filipinos of Yesterday”)

Our country suffers from inequalities, as the gaping chasm between the haves and the have-nots persists. Having our current tax system continue would exacerbate such an unjust situation. The middle class, one-fourth of the country’s total number of families, could shrink over time, falling into the ranks of the millions forced to live day-to-day, while the upper class (0.1 percent of the families) zooms even farther ahead of the pack.

When I filed early this year Senate Bill No. 2149 to lower individual income taxes across the board and adjust tax brackets, little did I anticipate the tremendous support the measure would generate.

The germ of the idea came from an unlikely source—Commissioner Kim Henares of the Bureau of Internal Revenue (BIR) who said that the “most prudent way” was to have a holistic approach in amending our tax system, during a Dec. 17, 2013 committee hearing on 13th month pay.

The statement intrigued me, causing me to look at the provisions of the Tax Code. I discovered that the percentage and tax brackets have remained unchanged since the 1990s.

During our first hearing for SBN 2149, one of our resource persons was from a noted tax consultancy firm. She shared that her 20-year-old daughter was hired for her first business process outsourcing job. She noted that though her daughter graduated a year ago, her gross income was already taxed at the third-highest rate of 25 percent.

Practically everyone I meet, whether old friend or new acquaintance, express support for our efforts to lower taxes. And this should come as no surprise. The Philippines has some of the highest taxes in Southeast Asia, not to mention one of the highest value-added tax (VAT) rates at 12 percent. Income is taxed at very high percentages and at very low thresholds or amounts and brackets.

To illustrate, a taxable income of more than P500,000 or around US$11,500 is not subject to income tax in Singapore, while Thailand imposes a tax rate of 10 percent. It’s 11 percent in Malaysia and 20 percent in Vietnam. For the same taxable income, the Philippines imposes 32 percent.

Our neighbors in the Association of Southeast Asian Nations (Asean) clearly feel that at certain income levels, more disposable cash or purchasing power must be left in the hands of taxpayers to enable them to lead good lives and provide for their families. 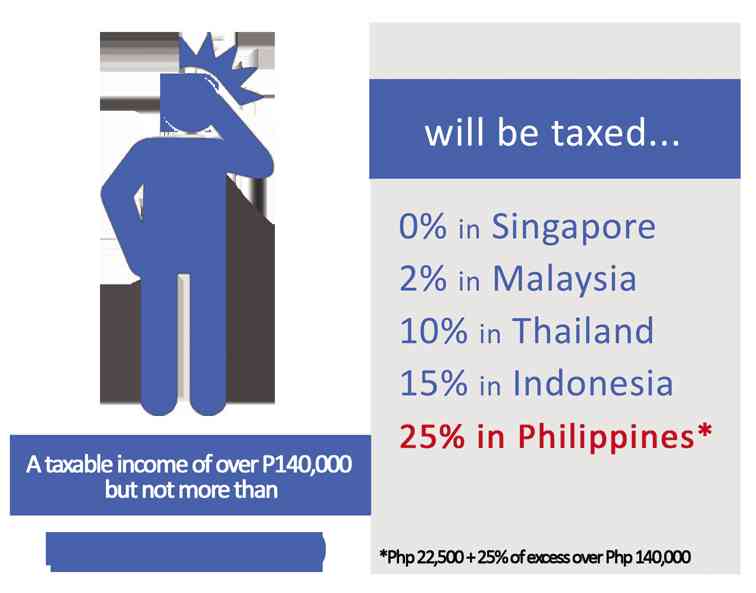 In such countries, young people entering the workforce and starting family life can easily dream of saving up for their own home; buying a family car; planning their children’s education; saving up for a family vacation; plotting their retirement; or starting a small business that would help pay their bills.

Would the same hold true here? Let us see.

Take for instance, a married man who has built a long teaching career and currently holds a master teacher position in a public school in Bicol. He is his family’s breadwinner, while his wife takes care of their three children. He earns a monthly gross income of P36,000. He pays around P4,000 in monthly withholding tax that considers standard deductions on dependents.

This is on top of mandatory contributions to GSIS, PhilHealth and Pag-Ibig—so-called “payroll taxes”—almost worth P3,600. Every month, he takes home P28,400. According to the 2009 Family Income and Expenditures Survey, the average expenditure of a family of five earning P36,000 is approximately P31,800. This means our teacher is short by nearly P4,000 a month to provide for his family. 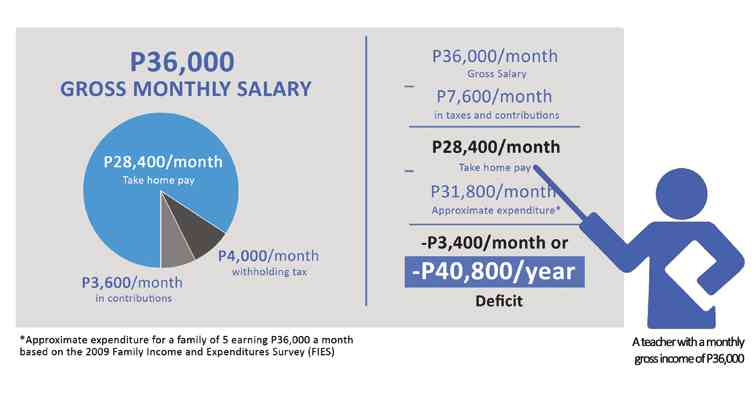 There is also a management professional with eight years experience who was promoted two years ago to a mid-level position in a food and beverage conglomerate. Her take-home pay is P43,000, giving P15,400 in monthly withholding taxes and almost P1,200 in mandatory contributions.

Monthly, she gives up P16,600 or almost 28 percent of income to the government. Because her gross monthly income is P60,000, she is taxed the highest rate of 32 percent—the same rate our tax system would ideally impose on the owner of the company she works for.

These cases illustrate the plight of our taxpayers. While the 1987 Constitution emphasizes that the effects of taxation be “uniform and equitable,” clearly they are not. Where the taxation system should be progressive, clearly the rates imposed are not based on the person’s ability to pay.

Keeping the highest tax bracket at P500,000 and above means that mid-level managers earning P55,000 to P60,000 a month would pay the same income tax rate as the Forbes 40—the list of the richest persons and families in the country.

The injustice is manifest. Worse, because the tax brackets do not have provisions for indexation or automatic adjustment every few years, at some point in the near future, even new employees will fall into this highest bracket.

This is the phenomenon called “bracket creep,” which Asian Institute of Management Prof. Ronald Mendoza explained as the situation where taxpayers who are not considered high-earning are already pushed into high tax brackets.

Mendoza said that at some point, bracket creep would lead to “fiscal drag” where people will not have any purchasing power left to contribute to the economy due to excessive taxation.

Leaving our current system untouched diminishes its progressive bent as more individual taxpayers—notably at the higher end of the income spectrum—are pushed into the same bracket as the richest taxpayers in the country.

A US Supreme Court Justice once famously remarked that the power to tax is the power to destroy. In the Philippines, that may be what is happening. Upward mobility is destroyed by crippling income taxes. From the start, any attempt to raise one’s status in life—lift his boat so to speak—is scuttled.

And why would upward mobility be desirable?

According to a study conducted by former Secretary General Romulo Virola of the National Statistical Coordination Board, over 74.7 percent of the population or 14 million families comprise the lower class, while only 0.1 percent or 21,200 families constitute the upper class.

In fact, based on 2013 Forbes Asia computations, the wealth of the 50 richest Filipinos totaled P2.88 trillion, equivalent to a fourth of the country’s 2012 domestic gross product.

The remaining 25.2 percent fall within the “middle class,” or the 4.7 million families with five members and earning P328,000 to P4 million a year.

Often, the ultra-wealthy have corporations large enough to qualify for fiscal incentives, like tax holidays or cuts for chosen industries or investments.

At another extreme, minimum wage earners are exempt from paying income tax. So who is left? The middle class.

BIR data show that the majority or roughly 82 percent of the total collection from individual income taxes, amounting to P246 billion in 2013, comes from compensation-income earners. The bulk of this is automatically deducted from salaried professionals earning P150,000 to P800,000 a year.

Based on the Virola study, these individuals are the middle class.

As far as individual income taxation is concerned, the salaried professional is the proverbial goose that lays the golden egg. At current rates and brackets, we are killing the goose, while the eggs are not coming as quickly as they should.

In his “Politics,” Aristotle wrote that a city ought to be composed primarily of people with similar if not equal standing. He described these “middle classes” as a moderating force in society, given that their wealth was adequate to keep them from the extremism of a hungry poor or an indulgent rich.

At the rate things are going in the Philippines, the middle class is endangered. If the status quo remains, members of the class will continue to be pulled down into lower-income groups because they are pushed up into higher tax brackets. 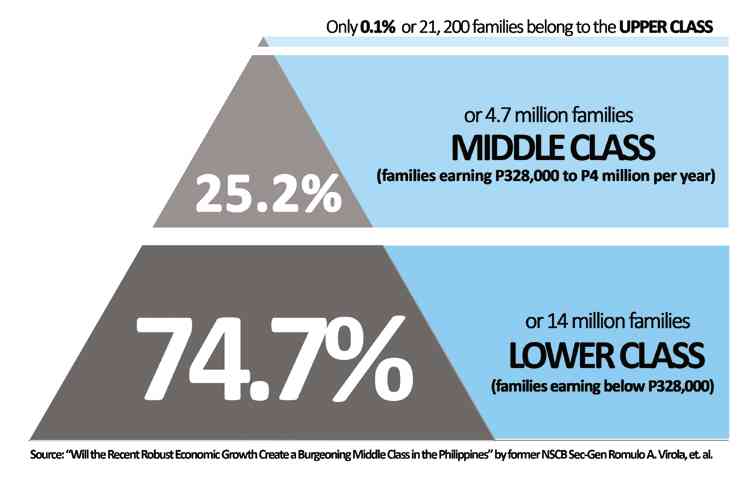 Revenue Commissioner Henares says it is not the right time to reform the income tax system, but practically the whole country, including the Tax Management Association of the Philippines and BIR employees, will probably say it is.

Even the World Bank has joined such calls, recommending that the Philippines place a cap of 25 percent on the personal income tax rate, alongside efforts to broaden the tax base and make the overall tax system more efficient and equitable.

Recent controversies over the Priority Development Assistance Fund and the Disbursement Acceleration Program have made people more aware and critical of how government spends their money. The same should apply to how government collects this money.

The Department of Finance and the BIR have been quick to oppose any measure for income tax reduction, stressing that the country is still in deficit and any revenue loss will significantly affect government social services and programs.

However, a study shows that every peso decrease in income tax results in a Filipino family spending P50 more. We are talking about more than 21 million families gaining extra purchasing power.

Taken together, that’s billions of pesos of added spending in the economy. Families will spend that money on items that surely generate more taxes, as VAT on goods and services for instance, not to mention the multiplier effects their consumption has on the economy.

It is not inconceivable to surmise that lower taxes could lead to greater compliance. Case in point: Russia replaced its three-bracket taxation system with a flat tax rate of 13 percent in 2001. Tax revenues increased in the following years, with real personal income tax collection growing by as much as 26 percent.

In 2007, Singapore lowered its highest individual income tax rate from 21 percent to 20 percent, one of the lowest in Asean. Between 2007 and 2012, revenues increased roughly 62 percent.

Tax reforms are imperative. Ongoing discussions must revisit tax brackets and should lead to lower applicable tax rates. There must be room for periodic adjustments of threshold incomes to keep up with inflation.

Benjamin Franklin remarked that life’s two certainties are death and taxes. Little could he have foreseen the two happening simultaneously—death by taxes.

The good news is we do have a choice. Last time I checked, congressmen and senators still do listen to their constituents. 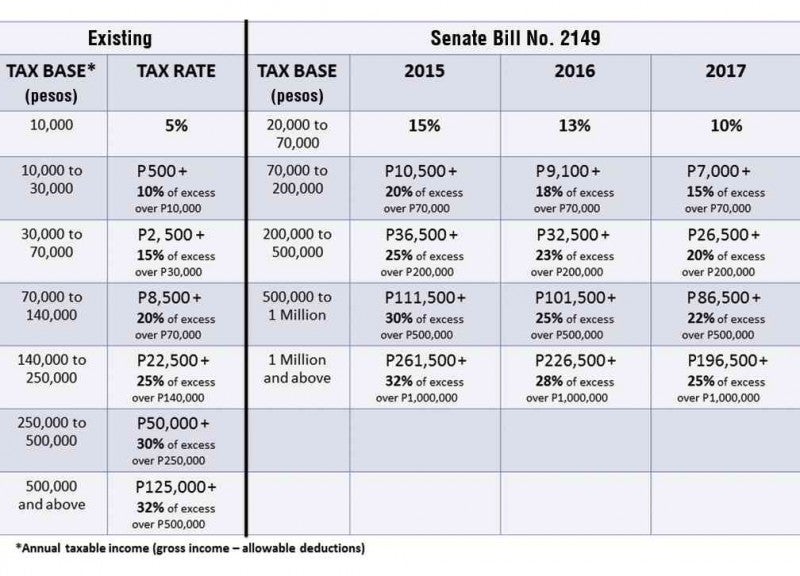 In addition to our bill, two other measures to adjust tax brackets have been filed in the Senate by Senators Ralph Recto and Bam Aquino. Numerous income tax bills have also been proposed and are now referred to the House committee on ways and means chaired by Marikina Rep. Miro Quimbo.

When one sees families struggling every single day to make ends meet, while public school teachers and other rank-and-file employees receive meager wages and are mired in debt, is it not time for tax reform? What is the point of a government growing richer while its young people and young families grow poorer by the day?

Shouldn’t the economic scales be balanced in favor of the vast majority of our people at some point?

Clearly, we’ve been going about things the wrong way.

Taxes don’t have to spell our death. Support tax reform.

(Sen. Sonny Angara, chair of the Senate committee on ways and means, is the author of Senate Bill No. 2149 that seeks to lower tax rates on income taxes.)