Past and present language issues in the Philippines have become the subject of popular discussions after concerned citizens stepped up their campaign against the Commission on Higher Education’s decision to remove Filipino subjects from the new general education curriculum.

As a result, some language myths have resurfaced, with regionalists and diehard English crusaders leading the attacks against the national language.

The points discussed here seek to debunk some language myths and hopefully convince the middle class and the elite that retaining Filipino subjects in college and using the national language as a medium of instruction in a number of subjects are beneficial to Filipinos in general.

1. Filipino is an imposition of “imperial Manila.” The multilingual composition of the Surian ng Wikang Pambansa, or the Institute of the National Language (INL), established in the 1930s to recommend a Philippine language as the basis for the national language, proves that this is nonfactual. (See Table 1.)

The decision to choose Tagalog as the basis of the national language is clearly a consensus among board members of the INL. The failure of the embers of regionalism to stop the rapid spread of Filipino throughout the archipelago is further proof that ordinary Filipinos are very supportive of the national language and linguistic regionalism is an idea rather limited to the English-speaking elites and some middle-class citizens in the regions. 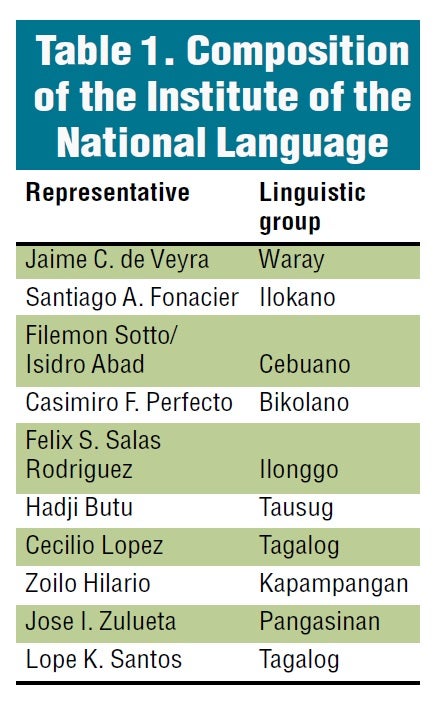 While it is true that until now, much of the vocabularies of the national language are from Tagalog, it must be emphasized that Article XIV, Section 6 of the 1987 Constitution paved the way for the further development of Filipino, based on other Philippine languages.

In fact, the UP Diksiyonaryong Filipino, now in its second edition, and a number of other dictionaries contain hundreds of newly assimilated Filipino words from non-Tagalog languages.

The multilingual academic Leoncio P. Deriada wrote in his essay “Ang Pagpapunlad ng Filipino sa Tulong ng mga Bisaya” (“The Development of Filipino through the Help of Visayans”) that the process of assimilating non-Tagalog words into the national language could be done effectively if initiated by speakers of regional languages themselves, considering that they know best what terms are adoptable. It is everyone’s duty to popularize the use of such words. (See Table 2.) 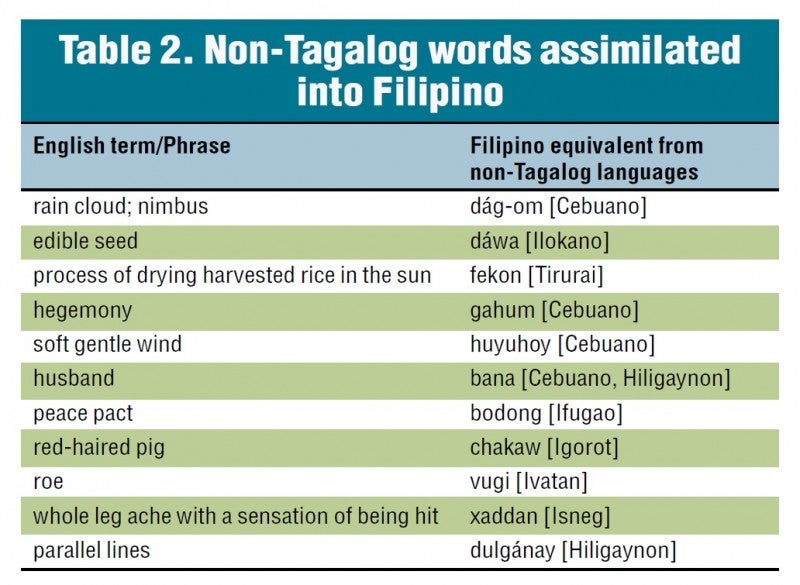 3. The use of Filipino is detrimental to other Philippine languages.

The spread of Filipino as the national language and as the lingua franca did not contribute to the weakening of other Philippine languages.

The seeming decline of other Philippine languages can be traced to the hypocrisy of self-described supporters of some regional languages who use English as their preferred language in attacking advocates of the national language, instead of spending their time and financial power on propagating the actual use of indigenous languages in the regions.

In fact, all pronouncements of these groups are written in English. In their assemblies and conferences tackling “mother tongue-based multilingual education,” English is also the medium.

Contrary to their claims, the spread and propagation of Filipino as the national language actually ensure the survival of words assimilated from non-Tagalog languages.

It must be noted that despite its meager resources, the Komisyon sa Wikang Filipino has been trying its best to fulfill its mandate of nurturing Philippine languages, publishing lots of materials such as dictionaries, grammar books and literary anthologies in all major Philippine languages.

4. It is more practical to use English rather than Filipino as the country’s lingua franca.

This is one of the most absurd myths about English and Filipino.

One, English is not at all related to any Philippine language (with the exception of Chabacano, which was, originally a Spanish-based creole), thus it is very difficult for most ordinary Filipinos to really learn English and use it as a lingua franca.

Two, as of 2010, less than 1 percent of households in the Philippines used English as their main language. How can such a foreign language be our lingua franca? In contrast, the number of citizens who use Tagalog (which serves as the main basis for the national language) as their language has steadily increased. Speakers of other Philippine languages easily learn Filipino because their languages belong to the same language family. (See Table 3.)

Three, the subpar national mean percentage scores of students in elementary and secondary schools also show that our facility with the English language is problematic. The official passing rate is 70 percent. 5. Using Filipino as a medium of instruction will negatively affect students’ facility with the English language.

This claim is not supported by any research. In fact, the experiences of developed Scandinavian countries, where their respective national languages are used from primary to tertiary education and where English is taught only as a subject, demonstrate that the Philippine obsession with English—which began when the Americans imposed it as the sole medium of instruction at all levels in 1906—is unhealthy.

The students’ deteriorating facility with the English language can instead be attributed to the general decline or at least stagnating quality of Philippine education, especially in the insufficiently funded public schools.

As a matter of fact, the Philippine government has consistently failed to comply with the United Nations’ standard for the education budget, as a percentage of the gross domestic product (GDP), to be pegged at 6 percent. (See Figure 2.) 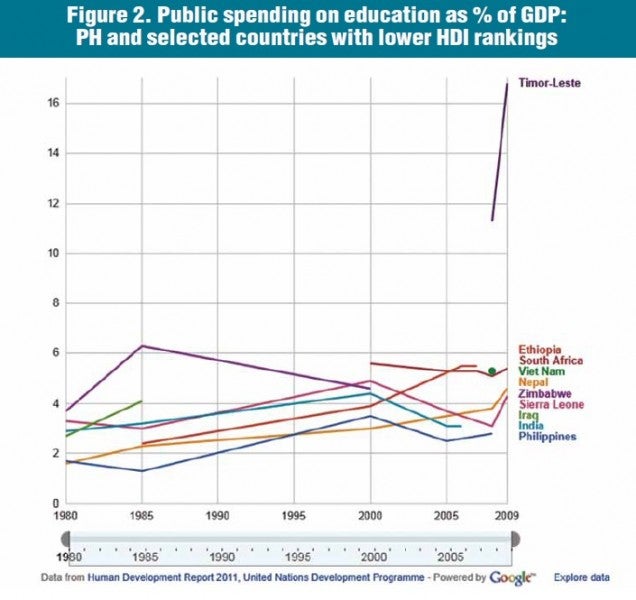 Perhaps, it is also instructive to review the country’s dismal official teacher-student ratio vis-à-vis other developed and developing countries. (See Table 4.) Instead of blaming the advances of the Filipino language for the troubles of English instruction, pro-English crusaders must unite with the rest of Filipino teachers in demanding higher public expenditure on education so as to help effect qualitative transformation of the quality of instruction in all subjects. 6. Filipino subjects from elementary to senior high school are sufficient.

A closer look at the recent National Achievement Test (NAT) results suggests that high school is the weakest link in the Philippine education system. The NAT results for Filipino are also subpar.

That means that the majority of Filipino students were unable to get at least a passing score in the NAT. In other words, students did not learn everything that they were supposed to learn in high school.

Thus, there is still a need to offer Filipino subjects in college to cover whatever content and skills that the students were unable to study and master in the secondary level. 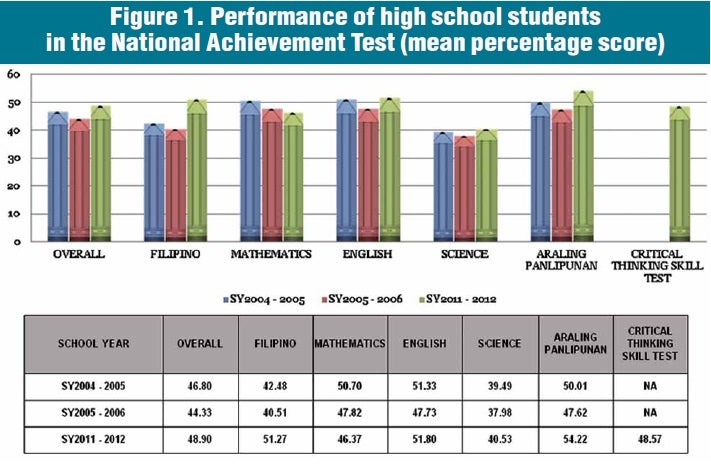 7. Countries that use foreign language/s as medium of instruction in college are more developed than countries that use their national language/s; our people’s English language skills bring huge foreign investments, hence English must be prioritized over Filipino.

These are two related myths that can be easily disproved by scrutinizing data from the human development index (HDI) of the United Nations. The HDI ranks countries by providing scores ranging from 1.0 (holistic human development in terms of high quality of health care, long life expectancy, high literacy rate, high average income and low-income inequality) to 0.0 (no human development).

Most of the countries in the top 10 of the HDI (Norway, Australia, Switzerland, the Netherlands, United States, Germany, New Zealand, Canada, Singapore and Denmark) use their own language in their education systems, in contrast with the Philippines (now at rank 117 among 166 countries, below Uzbekistan and just above South Africa) that insists on using English as the primary medium of instruction since 1906.

The same countries are among the destinations of overseas Filipino workers.

With regard to foreign investments, one wonders why, despite our much-touted English “comparative advantage” over most of our Asian competitors, we lag far behind when it comes to attracting foreign direct investments (FDI). Our FDI has never breached 2 percent of GDP in the past decade.

8. Filipino is not yet intellectualized; it cannot be utilized as a medium of instruction in college.

This is a myth borne out of ignorance and sheer laziness of anti-Filipino crusaders. They only need to visit the Filipiniana Section of the National Library or any library in the Philippines to see how far the Filipino language has achieved despite its precarious existence as a second-class language in the minds of policymakers and elite and middle-class citizens who claim English is their first language.

Countless journal articles, researches, theses and dissertations written in Filipino in all fields of knowledge attest to the fact that Filipino is now an intellectualized language.

Yes, it is yet to become fully intellectualized. We have plenty of materials written in Filipino, but it can be fully intellectualized only if we continuously teach it as a subject in higher education, while at the same time progressively using it as a medium of instruction in a number of, if not all subjects. We got to start somewhere the way our Malaysian and Indonesian cousins did a few decades ago.

Beyond additional education budget and tinkering with the subjects in the curriculum, a reorientation of our education and economic systems is necessary.

Retaining Filipino in the tertiary level is just one step toward aligning our education system with our goals as a nation. We can change the subjects as often but we should emphasize inculcating values for national development and international solidarity, rather than subscribing to dependency on failed foreign frameworks and the race-to-the-bottom doctrine preached by global capital.

Hence, the country’s labor export policy must be scrapped, including the related policy that treats schools in the Philippines as mere manufacturers of workers and professionals for export.

To complement such endeavors, job opportunities within the country must be broadened by implementing a comprehensive economic plan that focuses on self-reliance.

This can be done through industrialization, agrarian reform and modernization of agriculture. Hence, the Philippines must utilize its resources for its own citizens’ progress and not merely as exports to other countries.

The Philippines has the natural and human resources needed to become holistically developed and a net contributor to the global struggle against inequality and exploitation.

Gilas out to prove Korea win not a fluke; Tab fires back at ‘lucky shot’ remark

Smart celebrates all kinds of ‘#SimplyLove’ for Pride Month