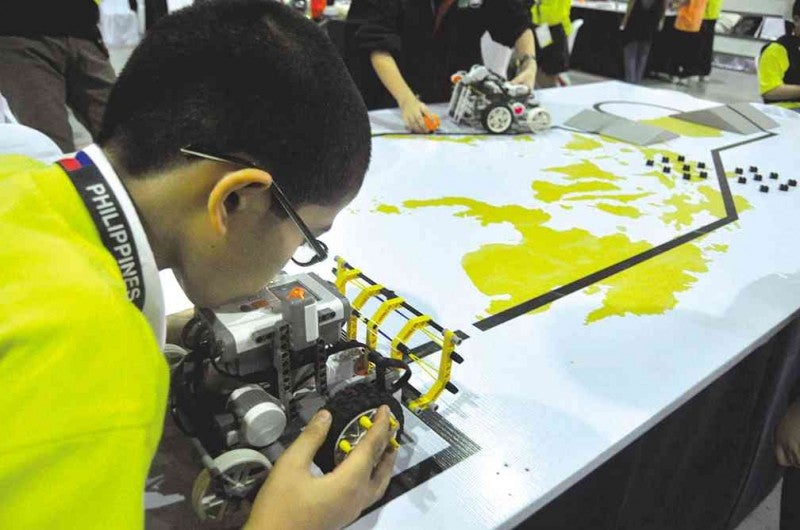 PINOY ROBOTICS A boy prepares to launch his robot for the Tour of the Philippines Challenge of the World Robot Olympiad at SMX Convention Center in Pasay City. The annual science and technology competition aims to develop creativity and problem-solving skills. RICHARD REYES

Much has been said about our country’s huge infrastructure deficit, particularly in transport, power and water. And criticisms or suggestions (unsolicited or otherwise) on this vital issue loudly persist which are just kosher till the public sees palpable improvements.

By contrast, little is said about our deficient “suprastructure,” defined as knowledge capital for innovation capacity resulting from spending on science and technology (S&T), and research and development (R&D).

With the Asean Economic Community (AEC) coming into full effect by end-2015, there’s hardly time to waste in addressing these twin deficits.

Massive investments in suprastructure, besides infrastructure, are what underlie the sustained rapid growth and inclusive development achieved by our progressive Asian neighbors.

The ultimate aim of countries vis-à-vis globalization—from which there’s no turning back—is typically to maximize the gains while minimizing the unavoidable costs.

To have a fighting chance in AEC competition, the Philippines needs to substantially and efficiently ramp up investment spending on its suprastructure. If this is achieved along with the country’s other ongoing policy and institutional reforms, the economy would in time be on a stronger platform to face up to challenges in AEC.

The country’s economy is known to have skirted the normal progression of growth, as exemplified by the developed and Asian emerging economies, from agriculture to industry and then to services.

Instead, it leapfrogged from an underdeveloped agriculture to services, largely skipping the manufacturing phase. A serious policy-induced mistake as agriculture and manufacturing are arguably key in generating jobs and goods also for export.

Of course, it did not help that the country’s politically turbulent 1980s deterred foreign direct investments—particularly from Japan—while its neighbors were going to town riding on the investment and export waves.

Philippine manufacturing has low technology and scale quality, and is concentrated in low-productivity subsectors, such as food, beverage, tobacco, textile, footwear, clothing and garments.

In stark contrast, in Malaysia, Singapore and South Korea high technology and scale products account for a big chunk of manufacturing. This is partly attributable to our less developed state of S&T and R&D—in turn, due to low general interest in and actual spending for knowledge suprastructure.

A lethargic and narrow manufacturing subsector (at least up until recently), brought about by scant technological innovation, translates into the country’s weak industrial base relative to its regional competitors.

According the National Statistics Office 2009 Survey of Innovative Activities (SIA), government support for private innovative activities is limited and networks for knowledge production are weak. Likewise, university-industry links are scarce and firms have limited access to technical support from the government and research institutions.

In general, the SIA underscores the importance of networking, linkages and technical partnerships between the government, industries and universities to enable manufacturing to flourish, thereby fostering inclusive economic growth through job creation.

Government-industry-academe partnerships would facilitate skills development needed to support the service sector while moving it up to higher levels, as well as help raise the competitiveness of the manufacturing sector. Over time, skills upgrading will boost the capacity of the country to innovate and implement new technologies.

Institutional and policy reforms initiated by the incumbent government since 2010 appear to be getting traction and paying off in terms of improvements in the country’s global competitiveness scores.

In the World Economic Forum’s Global Competitiveness Ranking, 2013-2014, the Philippines jumped six places to 59th from 65th in the previous year. This reflects broad-based improvements particularly in the dimensions of macroeconomic environment, financial market development, business sophistication and market size.

Intuitively, the positive relationship between R&D and industrial competitiveness highlights the importance of innovation in manufacturing. And, needless to say, the connection between R&D spending and university competitiveness (in which the Philippines, sadly, along with Thailand and Indonesia don’t show up) seems rather straightforward.

The country’s level of public spending on education as a fraction of the gross domestic product (GDP) has been quite low compared with its Asean and East Asian neighbors. In 1980, it spent 1.72 percent of GDP on public education and 2-3 percent in the 2000s, compared with the Asean-5’s average of 5-6 percent over the same periods. This is worrisome given the country’s subpar education investment level, to begin with, and its larger and younger population. Studies show that increase in factor productivity (in which human capital investment is crucial) is the third largest source of world output growth after growth in employment and in physical capital per worker.

Having an elite pool of scientists to generate technological innovation and a workforce with basic skills that can apply new technology in production generates the strongest contribution to economic growth.

Improving quality in education, besides merely increasing its resources, is critical to fully capture the beneficial effects on economic growth. Educational expenditure directed to such activities as R&D, faculty development and facilitation of linkages with global centers of excellence will greatly impact the level and quality of the human capital of university graduates.

There is strong evidence that the cognitive skills of the population—rather than simply school attainment—are robustly related to workers’ earnings, distribution of income and economic growth.

Spending on R&D covers current and capital expenditures (both public and private) on creative work undertaken systematically to increase knowledge—including of humanity, culture and society—and the use of knowledge for new applications. Philippine R&D spending stuck at around 0.15 percent for years is woefully inadequate for its 21st century requirements.

Sadly, this reflects the importance the government and society in general give to investment in suprastructure relative to its Asean contemporaries’ R&D spending which hews closer to the Unesco norm of 1 percent of GDP. In order for the country to transition to a knowledge-based economy, investments in S&T and R&D are a sine qua non. They not only contribute to increased productivity but, more importantly, lead to innovative products and processes. Government should lead in incentivizing and sponsoring basic and applied research in diverse fields.

A 2012 Unesco study identifies factors that may hamper innovation activity. In the case of the Philippines, 20.9 percent of firms rated the high cost of innovation as the most important economic impediment. Such factors as lack of qualified personnel, information technology, information markets and difficulty in finding suitable partners also constrain the innovation efforts of the private sector.

The highest levels of R&D spending correspond to countries that are well known for industry, technology and innovation, such as Singapore, Japan and Korea. The number of patents filed suggests a close correlation with the level of R&D expenditure of countries.

The number of patent applications in the Philippines has been among the lowest in Asia—1.8 per million population in 2010 while Thailand had 17.6, Malaysia 43.4 and Vietnam 3.5. Indeed, we reap to the extent that we sow!

Expenditures on R&D and public education, particularly at the tertiary level, are also reflected in the number of published scientific and technical journal articles.

The main criteria in the rankings are academic reputation, employer reputation, faculty-student ratio, papers per faculty, citations per paper, international faculty and students, and inbound and outbound exchanges.

In the QS-Asean ranking, UP is merely 8th of 10 universities and has next to the lowest total government funding after University of Indonesia, which ranks 10th. (See table.) Except for three outliers, the data show a fairly close correlation between government funding and the QS ranking.

The foregoing evidently points to the need to scale up the standards of our HEIs in general toward parity in AEC. Government resources will no doubt prove puny for even just the main state universities and colleges scattered across the archipelago, let alone the private HEIs.

Private resources also would have to be mobilized. Hence, a case for public-private partnerships in suprastructure investment.

Meanwhile, considering the hefty funding required for high-level research and teaching, there appears to be a need to first focus scarce resources on a select few research and teaching universities that can form the nucleus of the suprastructure. This would result in wider spread effects (e.g., MS and Ph.D. graduates and research leads) to other HEIs over time. Having been officially ordained the “National University” through Republic Act No. 9500 (April 29, 2008), UP is expected to perform the lead role in this endeavor.

Mobilization of both public and private resources to strengthen our suprastructure can more likely be achieved if society accords a higher value to quality education, R&D and innovation capacity required for jacking up the economy’s regional and global competitiveness.

Media could greatly help in rebalancing society’s cultural values from the glitz and glamour of show biz and sports to the critical importance of S&T and R&D for the country’s economic modernization and long-run inclusive development.

It is time that our country seriously recognized and resolutely dealt with its scientific and technological shortcomings as there is no turning back from economic openness and globalization.

Indeed, the urgency is further underscored with the AEC integration knocking at the door. Goods, capital and labor—including high-level human resources (both actual and potential)—can then move freely across national borders, thereby sharply heightening competition.

In the near term, given the country’s considerable lag in industrial progress, the effort should be for a massive investment in quality Master of Science (MS) programs, to speedily produce able MS graduates to address the human capital needs in the various economic sectors, especially for R&D in technology-based manufacturing industries and knowledge-based business process outsourcing.

Likewise, Bachelor of Science (BS) programs should be strengthened, especially in terms of their technical components, such that graduates could also be readily employed in industry, prior perhaps to pursuing higher degrees.

Institutions like the Technical Education and Skills Development Authority should be geared toward providing solid vocational-technical training of workers in large numbers who are especially needed in small and medium enterprises that constitute the predominant majority of the industrial sector.

In the longer term, the goal should be to develop Filipino scientists and engineers with Ph.Ds (besides MSs and MAs) in quantity and quality adequate to support the economy’s growth that will be inclusive and self-sustaining. This, in turn, would enable our suprastructure to move to a higher plane as will be required by an increasingly sophisticated knowledge-based economy.

E-mail: [email protected] The article is based on UP School of Economics Discussion Paper No. 2014-07, available at www.econ.upd.edu.ph.)

TAGS: Infotech, IT, Robotics, Suprastructure, Talk of the Town, Technology