The trouble with impeaching President Aquino 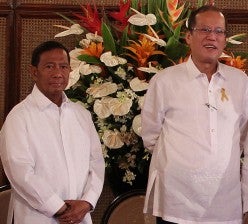 The trouble with impeaching President Aquino is that Vice President Jojo Binay would become president. His wife, Elenita, would become first lady. What a prospect! It would be as if Ferdinand and Imelda Marcos were back in Malacañang.

The last time we impeached a president (Joseph Estrada), he was succeeded by the then vice president (Gloria Macapagal-Arroyo). And look what happened. The cure was worse than the disease. Would it be the same if P-Noy is impeached (and convicted) and Binay succeeds him?

Jojo and Junjun have just been charged with plunder in the Office of the Ombudsman for constructing an 11-story parking building beside the Makati City Hall which, at a cost of P1.56 billion, makes it the most costly parking building in the Philippines, and maybe even in Asia and the world. Jojo and Elenita are already being tried in court for graft cases committed during their terms as mayor of Makati. Abigail allegedly has links to the pork barrel scam of Janet Lim Napoles. Only Nancy is free of accusations. What a dynasty!

Jojo and Junjun have claimed that the new plunder charges were “politically motivated.” Junjun said the complaint was nothing new and that it was “fabricated.” The charges were filed by the Save Makati Movement, a group of Makati residents.

According to the complainants, the city government should have paid only P7,691 per square meter for the parking building, but the project cost was jacked up to P48,889 per square meter when it was completed in 2013, for an overprice of almost 600 percent, or more than P1.255 billion. They also say that even the current prevailing cost of commercial buildings in Makati is only P25,000 per square meter.

Vice President Binay claimed that politics and the 2016 presidential election were behind the filing of the charges by his political foes, who, he hinted, were being backed by a “political rival.” But he refused to name the “rival.”

Mayor Junjun noted that the complaint was filed after the release of the results of a Pulse Asia survey showing that his father was the leading choice for president in the 2016 election. (Actually, the survey results showed a drop in the Vice President’s popularity rating, but it was still higher than those of his rivals.) Father and son did not say, however, why the building cost that much.

“Politically motivated” is the usual mantra of politicians when they are caught with their hand in the till and charges are filed against them. This latest case is no exception.

We have to admit it: The 2016 presidential election campaign has started.

In another speech defending the Disbursement Acceleration Program (DAP), President Aquino said the Supreme Court had also transferred funds in the judiciary. Why is it all right for the Supreme Court to do it, but not all right for the executive branch? he asked in effect. In an earlier speech, he also said that other presidents before him had transferred funds. Why could they do it and I cannot? he asked.

Here is why:  Because you were caught and they were not.

Had they been caught, too, no doubt the high court would have also declared their actions unconstitutional.

And while previous presidents and the Supreme Court were not caught red-handed illegally transferring funds, it does not mean P-Noy was not violating the Constitution when he did what they did. You cannot justify your actions by those of others. Just because a thief was not caught before does not mean that the actions of a new thief are okay. They both committed crimes. The only difference is that one was caught and the other was not.

Isn’t it the executive branch which prepares the national budget that it sends to Congress for approval? Why did it set aside too little funds for some projects and too much for others? That shows incompetence on the part of the Department of Budget and Management.

The Supreme Court declared the DAP unconstitutional not because the funds were put to “good use” but because the executive branch usurped the exclusive power of Congress to allocate funds. Also, the DBM hijacked funds and called these “savings” before the project was completed and before the end of the fiscal year. That’s illegal.