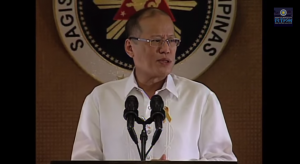 President Benigno Aquino III talks to the nation in a televised speech July 14, 2014, about his government’s decision to ask the Supreme Court to reconsider its decision to declare the Disbursement Acceleration Program (DAP) unconstitutional. Aquino put himself on collision course with the high court as he defends the use of the funds for administration projects. Screengrab from RTVMalacanang Youtube account

Expectedly, the reactions to P-Noy’s statement last Monday shaped up along partisan lines. I was in Sorsogon then and ended up stranded in Legazpi the next day, with all flights to and from Bicol canceled. From a hotel window I saw “Glenda” pummel the city late Tuesday afternoon, a keening wind driving sheets of rain across the street and all sorts of debris flying everywhere. I wondered which one was the more furious, the storm that was unfolding or the one P-Noy had just unfurled.

The reactions to the latter, as I said, drew along partisan lines. His allies praised it as a reality check amid too much legalism, bringing down the justices from their ivory tower to the ground where they could smell the odors of hope and despair. His critics or adversaries slammed it as an act of madness, not unlike King Lear tearing his hair in the swirling tempest, if not an act of war by the executive branch on the judiciary.

I myself am not entirely partisan; being a journalist compels you to try to look at things from a certain distance, with a certain perspective. But I have been, and am, hugely sympathetic to the P-Noy administration, which I credit with having accomplished huge things, which were attested to and toasted by the global community during the World Economic Forum on East Asia. I continue to wish it well. Yet I am deeply concerned with a couple of things P-Noy pretty much proposed last Monday.

The first is the restoration of the DAP (Disbursement Acceleration Program). In effect, he called for it to be revived and given pride of place in government policy.

The first time P-Noy spoke about the DAP was late in 2013, when he defended it. His arguments were much the same as they were last Monday, chiefly that there was nothing unlawful about it because the amounts he transferred to other projects consisted of savings. The transfer, in midyear, moreover made sense because the money would be better spent on projects that were moving, not on those that were not.

P-Noy’s defense of the DAP fell on deaf ears, the public’s and the courts’. His ratings plunged to an all-time low up to that point, and the Supreme Court rejected his argument, saying that you cannot invent your own procedure of pooling savings and justify the transfer of those savings on the ground that you mean good for the country. Accepting that something was wrong with the DAP, its author Butch Abad declared that it would henceforth be discontinued and indeed had been discontinued since end-2012, when it outlived its usefulness.

Subsequently, the Court completed its rejection of the DAP by unanimously ruling it unconstitutional. The justices put it in no uncertain terms: Malacañang “had usurped Congress’ power of the purse.”

But instead of accepting Abad’s resignation, as the public and even many allies demanded, P-Noy rejected it. He also rejected the Court’s ruling, saying that the Court failed to appreciate a provision that legalized the DAP, and that the Court failed to appreciate the DAP’s moral imperative—it was an instrument for doing good for the people. Instead of the Court helping government do good for the people, it got in the way of it.

What is this but bringing the DAP back? The Court proclaimed the DAP dead and called for it to be buried, but P-Noy breathed new life into it.

The second is that P-Noy’s defense of the DAP calls not just for it to be allowed but for much, much more. The argument that the Supreme Court has gotten in the way (“hadlang”) of government puts forward a perilous logic. His own analogy for the Court’s ruling is that it’s trying to prevent government from parking on a “no parking” street when it is doing so as a matter of emergency, as a matter of saving a life. In fact, the better analogy is that it’s preventing government from cordoning off an entire “no parking” zone for whatever it is it wants to do.

The pinhead on which P-Noy’s argument/analogy rests is that he means to do good for the people, to do well by them, and not giving him the leeway for it constitutes obstructionism. You accept that premise, and the question is: Why draw the line at giving the President the leeway to reassign only savings of his making? Why not give him the leeway to use the entire budget (the “no parking” zone), including the sums allocated by Congress for specific programs—like the traffic light, they are only a suggestion—as he deems necessary? Since we can trust the President to use the money well, anyway?

Just as well, why do we need a Supreme Court at all, if all it can show is ineptitude, as seen in its failure to see the legal provisions that would have legalized the DAP, and narrow-mindedness, as seen in its failure to appreciate the life-and death urgency of allowing government to meet an emergency? The logic of P-Noy’s diatribe against the Court is to call on it to stop making judgment calls, or plain interfering, in government’s uses of the budget, given that those uses spring from—a term that has gained much currency these days—good faith.

Indeed, it is to call on us to ignore, dismiss, take with a grain of salt, the Court’s ululations. That is what it means when you say you will appeal its ruling but treat it as moot and academic in the meantime.

Which brings us back to the analogy. If you’re a traffic cop, would you allow someone to regularly park on a “no parking” street because he says he is meeting an emergency? For all you know, he just happens to like the restaurant nearby that serves healthy food. To pursue the analogy, that is like rewarding the senators for voting against Renato Corona—Revilla, Estrada and Enrile call it a bribe—which is arguably healthy for the country, never mind that it doesn’t meet the justification of a life-and-death emergency.

The tragedy of it, like the snubbing of Nora Aunor as national artist, is that it is so unnecessary, so gratuitous. I don’t know that P-Noy couldn’t have achieved the same ends without insisting on the DAP, without going to war with the Supreme Court, without cutting corners. Governance is the art of finding ways to work within the rules, to make the system work for you, to accomplish reasonably lofty ends. The opposite of it is leaving a lot of debris that makes the accomplishment of those ends the hardest thing on earth.

P-Noy’s statement last Monday was a flashpoint. The Sona is less than two weeks away. We’ll soon know what will happen.

Whether it will make or it will break.