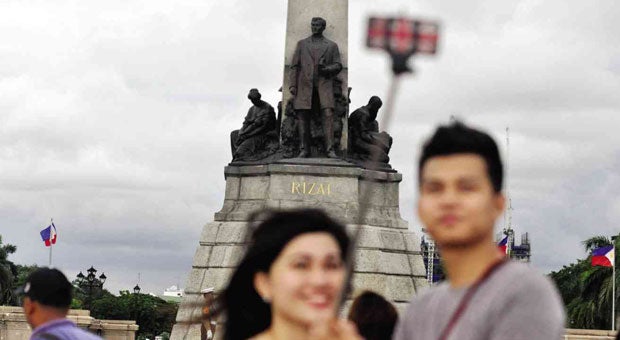 RIZAL BIRTHDAY A couple takes a “selfie” with the monument of Dr. Jose Rizal as background at Luneta Park, also named after the national hero, in Manila. The country will commemorate Thursday Rizal’s 153rd birthday. RICHARD A. REYES

History has a roster of names that, for better or for worse, are deemed to embody racial character. To mention a few: in the West, there’s George Washington, Albert Einstein, Winston Churchill, Charles de Gaulle, Karl Marx and Franklin Delano Roosevelt; in the East, there’s Mahatma Gandhi, Sun Yat Sen, Mao Zedong, Hirohito and Ho Chi Minh; in Africa, there’s Nelson Mandela. I believe that the Filipino national hero, Dr. Jose Rizal, is among those who qualify.

Rizal has been called the Great Malayan. But what in his persona deserves this attribution? To me, it is his being Filipino.

The archipelago had other sons who came before him and who like him gave their lives to defend the land of their birth.

Lapu-Lapu struck Magellan down and ended the dream of the first Spanish conquista less than a month after its landfall on the future colonial soil.

But he didn’t call himself Filipino; he was the proud chief of Mactan, an islet of a petty kingdom.

The next wave of Spanish conquerors, though more successful, would be equally besieged.

For 300 years, tribe after tribe took up arms against the colonial regime for one reason or another—the friars, the Church, forced labor, a wine tax, the tobacco monopoly.

Whether the rebellion was long-drawn-out or short-lived, the rebels fought for the same cause: to regain the freedom they used to enjoy.

Yet, they didn’t call themselves Filipinos. They identified themselves as Pangasinenses, Ilocanos or Tagalogs.

Even the Muslims of Mindanao, the most unbending of the islanders, launched the Moro wars not as a nationalist campaign but as a jihad against infidels.

Even at a later time, when the winds of European Enlightenment wafted over the archipelago and created the ilustrado, the educated class, no one called himself Filipino in the sense that the word is regarded today.

While the Tagalogs, Visayans, Pampangos and Bicolanos were beginning to call the archipelago “Philippines” and its inhabitants “Filipinos,” both terms were associated merely with geography, never for natural affections for the land or the people.

The Spaniards who were born in the Philippines, who were snubbed by Spaniards from Spain, called themselves “Filipinos,” but only to assert an equal superiority.

To the very end all the Spaniards, regardless of origin, called the natives by the derogatory name they had always used—indios.

Rizal’s contemporaries were no better. Their hearts might have been in the right place, but their visions didn’t transcend the colonial horizon.

Pedro Paterno wished to be named duke or grandee of Spain. His ambition was perhaps inspired by the Spanish Constitution, which stated that any free man born on Spanish soil—which the Philippines was—was a Spaniard. And a Spaniard, as a Spanish governor general proclaimed, “is one who can be nothing else.”

Rizal thought otherwise. He showed his countrymen they could be something less than merely brown Spaniards. They could be Filipinos, a people sharing common roots in a common land.

The urge to be Filipino became an obsession when Rizal lived abroad. As many of us know from our own experience, nothing evokes love of country more than an extended stay in a foreign land.

Rizal was no exception. Absence made his heart grow fonder for his native soil, and he wore his heart on his sleeve.

Everything Rizal did from about 1882, the year he left for Madrid at age 21, was dedicated to extolling the land and people of his affections.

As an in-your-face retort to the European conceit, he gathered the Filipino expatriates in Europe into an organization that proudly announced their origins. They called themselves Los Indios Bravos, thus turning around what was once a word of insult into a word of praise.

To help Filipinos rediscover the richness of their race, Rizal published his annotations on Sucesos de las Islas Filipinas. The original monograph, written by the Spaniard Antonio de Morga, is an account of the lively Philippine society in the late 16th century.

Rizal’s notes emphasized that the people of the archipelago had a culture of their own before the coming of the Spaniards. And to show the contrast between the past and the present, his two novels, “Noli Me Tangere” and “El Filibusterismo,” demonstrated how Filipinos were decimated by Spanish colonization and that the country’s present state was not necessarily superior to the past.

Through Noli and Fili, Rizal forced his countrymen to confront their tragic lot and then taught them what they could do and be if they loved “what is just to the point of dying for it.”

La Liga Filipina was Rizal’s most significant and far-reaching attempt at nation-building—at least in spirit for La Liga had a short life. The indios, he proposed, could be not only Filipinos but also citizens of a Filipino nation.

La Liga was the first organization in Philippine history to “unite the whole archipelago” and to create a “compact and homogenous” society of the old tribal communities from Batanes province to Sulu province, based on common interests and “mutual protection.”

Most historians peg the birth of Filipino nationalism to the secular priests Burgos, Gomez and Zamora, who demanded that the friar-controlled parishes be placed in the hands of native priests. But as Guerrero points out, the plight of the three martyrs was mainly religious and, therefore, had to do with the “wider universal Catholic Church,” not the “narrower, more exclusive Filipino nation.”

The intellectuals of that generation who shared the fates of the priests were equally oblivious of the concept of a Filipino nation. They worked for the rights guaranteed by the Spanish constitution to all subjects of the Spanish crown.

Rizal’s concept of nationalism and nation was based on loyalty to the archipelago, not to Spain. And its demands were rigid: an unselfish, responsible and moral allegiance governed by mutual rights and duties. Nothing less, or, as Rizal had asked, “What is the use of independence if the slaves of today will be the tyrants of tomorrow?”

Rizal’s life fulfilled the spiritual and political aspirations of his people. His death brought on a national catharsis that underscored the primacy of sacrifice.

And in being Filipino, Rizal paid tribute to the Malay race. His annotations to Morga’s Sucesos was a call to awareness of the old Malay legacy. His vision of racial unity in the region would be taken a step further by future statesmen.

President Carlos P. Garcia, along with the Malayan Prime Minister Tunku Abdul Rahman, established the Association of Southeast Asia (ASA) in 1959. In 1962, President Diosdado Macapagal initiated the creation of Maphilindo (Malaya, the Philippines and Indonesia) to bring together the peoples of Malay stock. President Ferdinand Marcos played an active role in the founding of the Association of Southeast Asian Nations (Asean) in 1967.

These alliances were preceded by the Southeast Asian Treaty Organization (Seato), which was organized in 1954. But Seato was essentially a creation of the West, implemented to stop the spread of communism in Asia. Its Asian members—Thailand, Pakistan and the Philippines—were outnumbered by the Western members—the United States, Australia, New Zealand, Great Britain and France—and it was the West that set and controlled its policies.

By contrast, ASA, Maphilindo and Asean rose from the region and clearly promoted regional interests.

ASA sought to find “ways and means to elevate the standards of living and improve the material welfare” of Southeast Asians.

Maphilindo’s agreement, known as the Manila Accord, reaffirmed a common goal to achieve economic, social and cultural progress in the region and to combine efforts in the “common struggle against colonialism and imperialism.”

Unfortunately, both organizations were plagued by diplomatic crises. But although they didn’t develop beyond the paperwork, they became the forerunners of the more productive Asean, which exhorted its members to “rise up from the confines of their colonial past” and approach the challenges of regional development with more pragmatic solutions that go beyond politics.

The Asean is now in its 47th year and, next year, will integrate into a single bloc called the Asean economic community. Its original five nations—Indonesia, Malaysia, the Philippines, Singapore and Thailand—have been joined by Brunei, Laos, Burma (Myanmar), Cambodia and Vietnam, bringing the total number of member states to 10.

Wherever he is, Rizal must be smiling as only the Malay could.

(Editor’s Note: The writer is a member of the Philippine Historical Association and the Knights of Rizal.)

Reminder from Archbishop Soc: No clapping during Mass