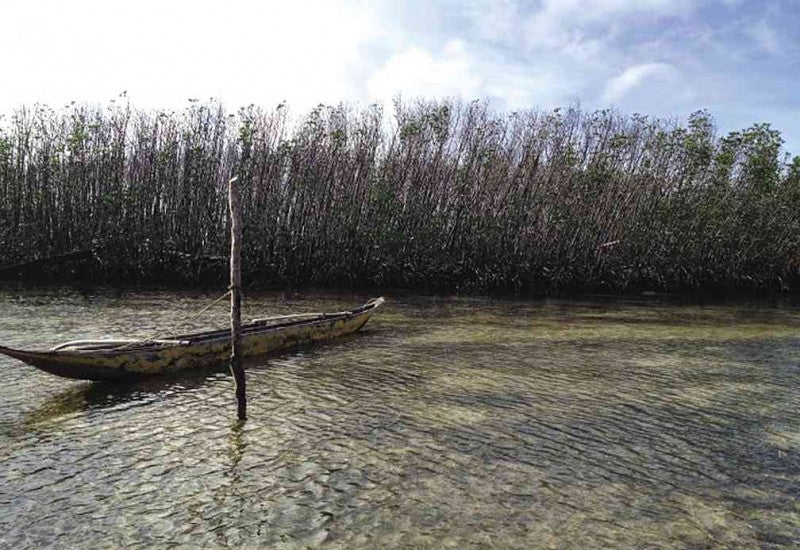 MANGROVES of Maliwaliw Island in Guiuan town, Eastern Samar, lost their leaves as a result of Supertyphoon “Yolanda.” PHOTOS BY BELINDA DELA PAZ/CONTRIBUTOR 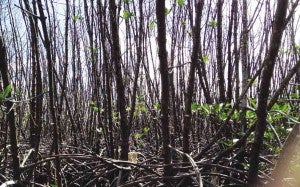 In the wake of Supertyphoon “Yolanda” (international name: Haiyan), the government allocated P347 million, since then increased to P1 billion, to rehabilitate mangroves in devastated areas.

The loss of thousands of lives and livelihoods was well documented by the media. However, were the degree and extent of destruction in mangrove ecosystems documented as well to merit such a huge amount?

To assess mangrove damage, two teams were simultaneously deployed in Eastern Samar (seven sites in six municipalities) and Leyte (five municipalities and two cities) over a total of seven days in January and March. (See map.)

The teams comprised 17 participants from nongovernment organizations (ZSL, GDFI, ELTI, Haribon Foundation, Conservation International and Tambuyog) and academic (UP Diliman, UP Tacloban, Ateneo de Manila University and De La Salle University) communities and and the Department of Environment and Natural Resources Region 6, with assistance from UP Tacloban students. 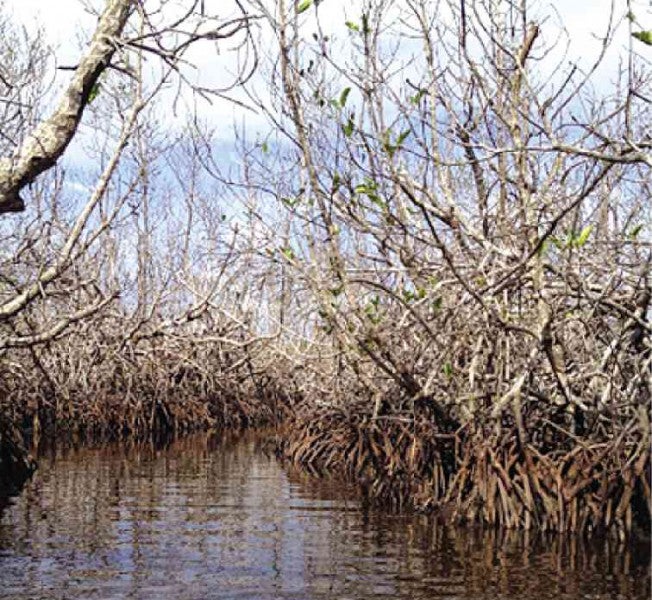 a) Examining mangrove community structure (estimating the counts and biomass of live seedlings, saplings and trees on a 100-square-meter plot)

b) Noting the degree of defoliation and other damage classified as not damaged (intact), partially damaged (branches broken, trunk partially broken but still standing and with or without shoots), or totally damaged (uprooted, or trunk broken at the base, no shoots).

1. The dominant naturally occurring mangrove species in Eastern Samar are “pagatpat” (Sonneratia alba) facing the open sea, “bakhaw” (Rhizophora apiculata and R. stylosa) behind pagatpat or along the leeward margin of islands; and “saging-saging” (Aegiceras floridum), and in Leyte are pagatpat and “piapi” (Avicennia marina, A. officinalis).

Plantations in both provinces are of bakhaw and nipa (Nypa fruticans) varieties.

2. Most of the mangrove stands in the 14 locations showed only partial to minimal damage, based on the presence of new shoots on defoliated branches and on branchless trunks of trees, to none at all.

Recovery potential was also reflected by a few to numerous seedlings and saplings present. Completely defoliated/bare trees and branches already had shoots (leaves) appearing as of 2.5 months and 4.5 months when we did the surveys.

3. Fringing mangroves (lining the shore) showed a pattern of greater damage in a) seaward (vs landward) plots; b) western (vs eastern) side; and c) planted (vs natural) stands. 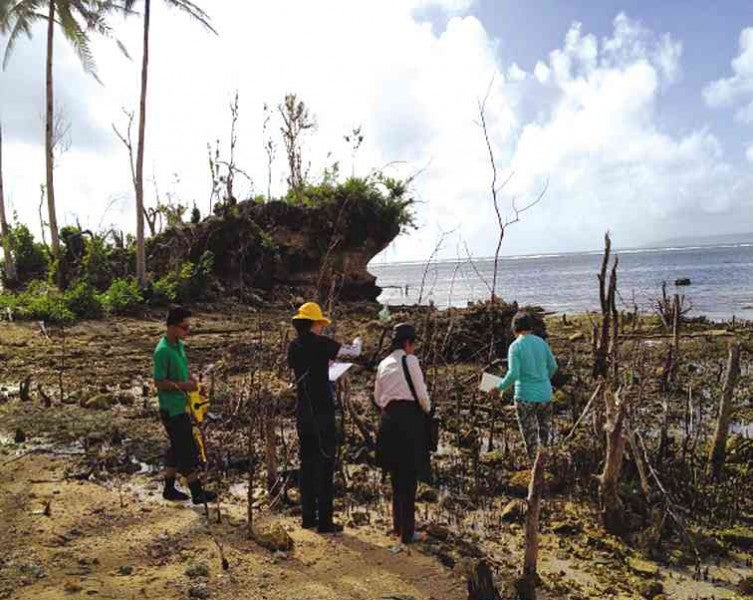 The most severely damaged sites were those that suffered a direct hit: Barangay Batang in Hernani and Maliwaliw Island in Guiuan, Eastern Samar, and those that were in the path of the strongest storm surge: Barangay 83a in Tacloban City.

Some plots in these sites showed 100-percent mangrove mortality.

4. Damage caused by factors other than Yolanda are:

* Encroachment of settlements of marginalized coastal dwellers who have no means to purchase land;

* Mangrove conversion to ponds which is illegal (under Republic Act No. 9171), e.g., in Ormoc City;

* Conversion to nipa plantations; and

* Reclamation (filled in with soil) in Carigara.

1. Mangroves are bioshields that provide storm protection to coastal communities and habitats.

In the process, they may sustain damage but they also recover, as we observed in the mangroves of Eastern Samar and Leyte.

Only a few locations in landfall sites—Hernani and Maliwaliw Island in Guiuan and Barangay 83a in Tacloban City—suffered complete mangrove mortality.

They represent a total of only 100 to 200 hectares that need replanting.

2. The major intervention for the Eastern Samar-Leyte mangroves is therefore protection:

3. Protection is needed by enforcing the law and putting a stop to pond development (Ormoc) and reclamation (Carigara) in mangrove areas.

4. Mangrove planting is needed in very few sites (Hernani, Maliwaliw Island and Barangay 83a in Tacloban City) covering 100, not more than 200 hectares.

Such mangrove planting should be science-based in terms of correct species, sites (elevation mainly) and season for planting.

(These recommendations refer to existing mangroves that form natural greenbelts. Where they have disappeared, as in many parts of Tacloban, they should be reestablished.

5. Coastal greenbelts comprise both mangroves and beach forests. We recommend a minimum of 100 meters based on science (MacIvor et al., 2012) and law (M.N.R. Administrative Order No. 42 of 1986) instead of the 40 meters prescribed by the Water Code (Presidential Decree No. 1067).

6. Where the intertidal area is too steep or too exposed for mangrove growth and the supratidal (above the high tide) area occupied by settlements and resorts, reestablishment of greenbelts may require:

How to spend P1B

The government plans to release P1 billion mostly for new mangrove planting in the Yolanda-affected provinces. This is misguided and even risky (as participants in the program tend to clear the many recovering mangroves just so they can plant new ones and avail themselves of the money).

The following science-based activities are recommended for funding by such a big amount from us taxpayers:

*Conduct ground assessments for mangrove areas not yet surveyed.

*Build capacity through mangrove training courses and the like for LGUs, state universities and colleges, people’s organizations and other stakeholders tasked with protecting and rehabilitating the mangrove areas.

We appeal to President Aquino to consider these recommendations based on ground observations conducted in the areas worst affected by Yolanda.

We support rehabilitation initiatives especially when they give importance to the restoration of ecological services. We believe that the P1-billion rehabilitation fund will go a long way but only if used wisely.

Read Next
Fast facts
EDITORS' PICK
USAID Opportunity 2.0 calls for applicants for grants for out-of-school youth engagement
Pharmally scandal: When middlemen profit even during a pandemic
Work-From-Home is here to stay and requires reliable logistics
DOTr to defend proposal to increase passenger capacity in public transport
The crisis within: Suicides rise as COVID takes its toll on lives, livelihood
Legarda emphasizes role of ICC/IPs in nation building this IP month
MOST READ
Isko to critics after remarks vs Robredo: I’m sorry, this isn’t about Mr. Congeniality
Maine Mendoza names her worst critic
Robredo on vote buying: That might be taxpayer’s money so accept it, but vote based on conscience
Bongbong says PH should modernize infrastructure to become Asia’s next logistics hub
Don't miss out on the latest news and information.