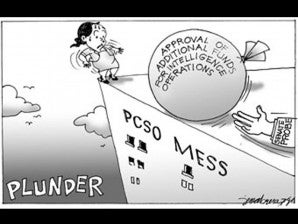 THE GOOD bishops still don’t get it, do they?

The reactions so far of the Catholic Bishops’ Conference of the Philippines to the furor over some of its members having received luxury vehicles from the Philippine Charity Sweepstakes Office during the presidency of Gloria Macapagal-Arroyo indicates that even the so-called moral leaders of this nation are not immune to misplacing their ethical bearings—if need be.

The clueless response: “I don’t know why they take it against us and make it appear scandalous,” by Davao Archbishop Fernando Capalla. The dilatory parry: “There are other beneficiaries who are not from the Catholic Church,” by Tandag Bishop Nereo Odchimar. The petulant riposte: “If P-Noy wants to get it, it’s ready,” by Basilan Bishop Martin Jumoad, referring to the Mitsubishi Strada he bought with a P1.1-million donation from the PCSO.

Then there’s the victim card: “The main intention of the PCSO is to destroy the credibility of the bishops,” by Lipa Archbishop Ramon Arguelles. Another variant: “This issue has already divided and damaged CBCP,” by Butuan Bishop Juan De Dios Pueblos, whose obsequious request for a P1.7-million Montero Sport was the most eyebrow-raising of the transactions. (For good measure, he also called President Aquino “vindictive,” blaming Malacañang for the straits he’s in.) Next—the non sequitur: “Is it because of the bishops’ position on the RH bill?” by Odchimar again. And, finally, the classic, hugely dispiriting, cop-out: The CBCP’s individual members are “directly” answerable to the Pope; CBCP itself, said Odchimar, cannot sanction erring bishops.

The Church leaders’ inability to recognize the gravity of the situation they’re in might, in time, turn out to be the more perverse and telling part of this still-unfolding saga. Perhaps, Pueblos and his colleagues remain stuck in the denial stage—unable to comprehend, unwilling to accept that their actions in this regard raise disturbing questions about the very foundation of their calling as ministers: their character and moral moorings. A church without moral ascendancy—one with leaders who, defying expectations, turn out to be perfectly willing participants and enablers in the kind of sleazy, slimy politics they so love to damn to high heavens in their homilies—is a church in serious trouble.

Receiving funds from the PCSO is not the main issue, although even there the Church already finds itself in a bind given its regular denunciations of gambling as an immoral activity. There is a good reason many private companies prefer to channel their charity efforts and donations through the Church. Groups like Caritas Manila have done a commendable job through the years in reaching out to the poor and dispossessed, and the Church is rightly seen as a conscientious, well-placed, highly organized entity that can ensure that endowments and offerings for the less privileged will reach their intended beneficiaries.

The devil, however, that the bishops seem terribly anxious to dodge with the flurry of distracting, extraneous details cluttering their outcries is this: They got their emoluments and vehicles from Gloria Macapagal-Arroyo, who needed to have the Church by her side throughout her tumultuous, scandal-wracked reign. The PCSO donations did not happen within a vacuum, as a happy case of happenstance, with no strings attached and no payback expected. One of their own is forthright enough to admit it. Retired Lingayen-Dagupan Archbishop Oscar Cruz  said it was “impossible” for Ms Arroyo to accommodate the bishops without some quid pro quo. “If this is to give to Church ventures, bakit ako hihingi dito sa gobyerno? Kapag humingi ka sa gobyerno, nakatali ang kamay mo.”

There’s the fly in the blessed ointment. At a time when the nation needed the moral strength and clarity of the Church as the Arroyo administration lurched from one outrageous impropriety to the next, where were its bishops? Being wined and dined, it now appears—showered with largesse, gifted with SUVs, comfortably set up in what would be called the “Malacañang diocese.” Was it “to buy their silence and cooperation?” wondered Fr. Oliver Mendoza, parish priest of San Fabian town in Pangasinan.

Mendoza needs only to read Pueblos’ letter to GMA, henceforth Exhibit A of this disgraceful moment in the local Catholic Church, to find the answer. For a brand-new 4×4 “as your birthday gift to me,” it said, “be assured of my constant support.”