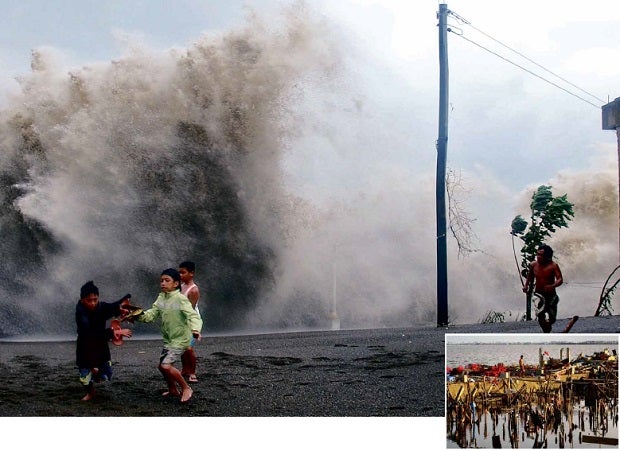 ANGRY SEA Waves whipped up by Supertyphoon “Yolanda” slam into a seawall in Barangay Francia in Virac, Catanduanes, sending plumes of water upward, and children and a man running for safety. [Storm surges are called “sú-oy” in the Bicol language spoken in Virac. –Ed.] Inset, poles and trash are all that’s left in a coastal area in Tacloban City after Yolanda. FERNAN GIANAN/INQUIRER SOUTHERN LUZON/RICHARD BALONGLONG (inset photo)

(Editor’s Note: Coming up with a local name that people can easily understand becomes pressing after thousands of people died on Nov. 8 when Supertyphoon “Yolanda” struck central Philippines.

Many people did not leave their homes on the shores of Leyte and Samar, paying with their lives for ignoring warnings from authorities that the typhoon would bring a storm surge of 5 to 7 meters.

To impress upon the people of the danger posed by storm surges, Tony Oposa, in an article in this section last December, proposed that surges be called “tsu-balod” or “tsu-alon”—from the words tsunami, “balod” [Bisayan for wave] and “alon” [Filipino for wave]. Eduardo Arrojado suggested that “tacloban” was the most appropriate term.

Their proposals have drawn reactions from readers, including Kelvin Rodolfo who suggests that surges be called “silakbô.” Rolando Borrinaga prefers “karak-an” and Benjamin Vallejo Jr. is rooting for “humbak.”)

Actually, there are old Bisayan words for seawater surges. In Eastern Samar, they have the word duluk.

In the Samar section of his account on the Franciscan missions in the Philippines published in 1865, Fr. Felix de Huerta, OFM, described the dolo (the way he heard it from the natives) as an almost annual phenomenon on the eastern and northern coasts of Samar that usually occurs at the change to the monsoon season during September and October.

This great tide, or surge, is brought about many times by strong winds and even by typhoons. Sometimes it occurs even without a little wind.

It does not always roll toward one exact spot. Sometimes it enters the pueblo of Guiuan, located at the southern point, and it spreads toward the island of Leyte, in which case it is not so dangerous to encounter in the open sea.

At other times, it smashes into the pueblos of Lanang (Maydolong) and Borongan, or climbing more to the north, into the pueblos of Tubig (Taft), Oras, Paric (Dolores) and Palapag, and sometimes toward the mouth of San Bernardino Strait. In this case, it endangers the pueblos of Catarman, Calbayog and other places along the west coast of the island.

De Huerta noted that it was the abundance of water that the dolo brought, which generally rose 60 to 70 feet over the ordinary level at high tide, from which the natives were warned to move away in barotos (outrigger boats) and other boats inland to reach the nearby mountains. The surges caused considerable losses in the fields and poblaciones (town centers), and even among people who were overlooked (i.e., not promptly warned).

But that increase in water volume does not last longer than the ordinary tide.

In an earlier century, the Jesuit Fr. Francisco Alcina recorded the word karankan (Part I, Vol. 2, Ch. 13), to refer to choppy waves of the sea, which unite one with the others and send spurts and eruptions of water.

Such phenomenon could cause boats to fill in with water and to sink, and these surges come unexpectedly and as a surprise even to navigators.

The word seems to be karak-an and not karankan as perhaps mistranscribed from the Alcina manuscripts. Karak-an is still being used in the language of Leyte and Samar, though not found in the published dictionaries, and it is associated with disaster or catastrophe. Thus, daku nga karak-an is understood as a huge or massive disaster or catastrophe.

In Alcina’s time, it seems karak-an (seawater surge) was a common cause of disaster among our seafaring people. But since this cause of disaster often came in a flash and unexpectedly, what often survived and could be seen in the retelling was the adverse effect. In time, the effect was mistaken for its stealthy cause.

I believe karak-an would be the appropriate native word for the storm surge brought by Supertyphoon “Yolanda” that struck Tacloban and nearby areas, and caused thousands of deaths and massive damage to houses, infrastructure and the landscape.

Daku nga karak-an, a huge storm surge, should first be recognized as the source and not just the effect or impact of the massive catastrophe on Tacloban and nearby areas last Nov. 8.

(Rolando O. Borrinaga is a professor at School of Health Sciences, University of the Philippines in Palo, Leyte. He is a local historian of Leyte and Samar, and survivor of Supertyphoon “Yolanda.”)

Metro Manila traffic is 2nd worst in the world—report

Duterte bars Cabinet members from traveling to US