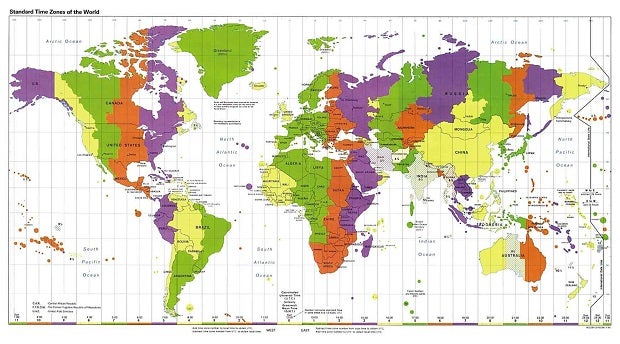 Standard time zones of the world
SKIPPING A DAY The Philippines did it in 1844, parts of Kiribati in 1995 and Samoa in 2011. Photo from Travel.com.hk/ bottger.typepad.com

The Garden of Eden is located in the country.” Once in a while I hear this comment, especially during drunken conversations in the Philippines. Not having any basis, this should be taken as what it is: fanatical love for the country expressed as a delusion.

But then again a 12th century commentary on the Talmud suggested that the date first advances at the place where it would be six hours ahead of Jerusalem. That would be 60 degrees to the east.

Looking at a map, one would easily guess that that line would be passing through the Philippines. Therefore, one can say that time starts in the Philippines. And this can support the Garden of Eden delusion.

Time, space and their relationship are fascinating.

For instance, the Samoans decided to skip the birthday of people born on Dec. 30, 2011.

Actually, the motivation was not out of caprice. By annihilating Dec. 30, 2011 from the calendar—Dec. 29 was followed by Dec. 31—Samoa was able to transfer from the eastern side to the western side of the International Date Line.

By skipping one day, Samoa was able hop to the Asian side and to have its calendar in line with its major trading partners—Australia, China, New Zealand and Japan.

The Philippines skipped one day in the 19th century. Before 1845, as part of the Spanish empire and Latin America as its major trading partner, the Philippines was included on the eastern side.

But by the 1840s, trade shifted to its neighbors, including the Dutch East Indies and Qing Dynasty China, and the jump to the Asian side became only natural. Monday was followed by Wednesday; Dec. 30, 1844 was followed by Jan. 1, 1845. I wonder when they celebrated New Year’s Eve.

The Philippine inertia to strengthen the linkages with the Asian side continues up to this day. In 2015, the Asean (Association of Southeast Asian Nations) Community will be established. The vision for stronger and deeper linkages within Asean includes the education sector.

Education has been deemed a force in creating and sustaining the community. It is the vehicle to advance development as well as to create a unifying identity of the Asean peoples.

When I was growing up in Pangasinan, my father placed a world map on a wall near the dining table. During birthday celebrations, my cousins would come over. We would gather before the world map and play the game of finding a place.

Someone would ask and others would look for it on the map. A cousin asked for Lima. The letters were too small and no one could find Peru’s capital on the map.

Someone guessed that it must be the cousin’s hand that was resting on the map since hand in Pangasinense was lima, which also was the word for five.

A Samoan friend once pointed out to me how Samoan language was an interesting language. Since the hand has five fingers, the language uses the same word for hand and five.

But what is amazing for me is that Samoans use the same word as Pangasinan’s word for hand and for five. There are some things that are not forgotten by Polynesians across oceans and across centuries.

When I was still studying electrical engineering at UP Diliman, I learned the primacy of the speed of light over time and space in the Special Theory of Relativity.

As a theoretical implication, time dilates and space contracts for a moving observer. “Einstein said so!” was adequate as an explanation, as he has been deified in Physics and other fields wishing to be associated with it. I never asked why or why should the speed of light in a vacuum be constant.

I could only surmise in half jest and half seriousness that the fixation toward the primacy of light had religious origins in which light was a fundamental sign of God’s spirit and guiding power.

On Earth, humanity measures time in terms of the planet’s movement in relation to the sun. One rotation is defined as one day and one revolution around the sun is defined as one year. We mark time based on the changes in our position in space.

Naoki Higashida, a 13-year-old boy with autism, pondering on evolution, asks why aquatic life forms should move onto dry land and evolve into human beings only to be ruled by time.

Humanity is regulated by sunrises and sunsets. Our lives are marked by important dates, such as birthdays and New Year.

After UP, I studied political economy at Kyoto University.

During my studies, I came across Marx and his ideas on time and space. According to him, time annihilates space in the capitalist mode of production. He showed that the pursuit and maximization of profit required the compression or the shortening of the turnover time of capital.

This would lead to more cycles in capital circulation, resulting in increased profits. Using this perspective, the geographer David Harvey pointed out that innovations in communications and transportation were implications of the requirement of capital accumulation.

This brings me to the economic model of Paul Krugman, a Nobel laureate in economics. His model, based on his homogenous treatment of time and space, may be flawed.

The arguments made by the sociologist Emile Durkheim that the understanding of time was culturally specific could substantiate this criticism.

Different cultural groups would experience time differently. For example, in premodern Madagascar, time could be measured in terms of the time it took to cook rice or roast a locust.

Perhaps, flawed modeling has to do about modern man and woman’s fixation on predictability no matter how this fixation would make the models far from mirroring reality and, for some, as long as they appear sophisticated.

Well, I may as well incorporate tarot cards as an element in my economic model. To make it look credible, I would use Laplace transforms, or some other seemingly sophisticated techniques used in Mathematics or Physics in finding the solutions.

This fixation on predictability has permeated all or almost all sectors of modern life. Under the modern production system of Fordism, to produce in huge volume at low cost, workers and different components of the production system, including machines and manufacturing plants, should be synchronized.

Their movements must be predicted beforehand for production to continue seamlessly and meet production targets. Idle time or even leisurely time for both workers and machines would only result in loss in profitability.

In the Philippines, time has always been divergent by minutes from place to place and from individual to individual. Someone would always be early while another would always be late for their appointments. Being on time according to one’s watch is not a guarantee for punctuality as it also depends on other watches.

From another perspective, no one is actually late since everyone can adjust his or her watch accordingly.

But as the modern world trumpets “time is money,” the government asked everyone to adopt Juan Time or One Time and synchronize clocks to the Philippine Standard Time at the stroke of midnight ushering in 2014. I can hear the march of modernization in the Philippines.

(John X. Lambino, Ph.D. is an assistant professor at Kyoto University’s Graduate School of Economics. He took up electrical engineering in UP Diliman and then political economy at Kyoto University. He is currently writing a book on the Association of Southeast Asian Nations [Asean] and the establishment of the Asean Community. He can be reached at [email protected])

Philhealth chief Morales told to go on leave due to lymphoma, chemotherapy