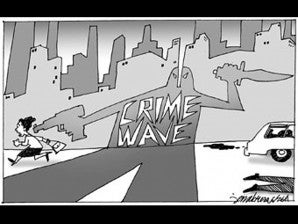 This may be the trial that tests our system of justice as never before, the trial to show that even the most powerful are subject to the majesty of the law, and even the most unknown of victims are heard and served by our justice system.

It was something that horrified so many of us. On Nov. 23, 2009, 57 people—among them, at least 32 members of the media—were executed in what was to become known as the Maguindanao/Ampatuan massacre, the worst case of election-related violence as well as the worst single attack on media in Philippine history. There were fears that the major suspects behind the killings, members of the politically influential Ampatuan clan, would go uncharged. But in the end, 197 suspects were haled to court, including eight of the Ampatuans themselves. Media and the victims’ families looked forward to a live trial, hoping the public would see the complete bloody picture, every detail shown, every death remembered. But the lawyers of the accused opposed the live coverage, saying it would be prejudicial against their clients.

In November, the National Union of Journalists of the Philippines led a petition for a live coverage of the trial. “[We] point out that the wholesale ban of television cameras inside the courtroom unwittingly infringes on freedom of the press; it constitutes a very subtle prior restraint since it involves the suppression of images and, very specific images at that, of the trial,” the petition read.

It was something that even the most powerful of Filipinos wanted. President Aquino said the airing of the trial would be “educational for the people.” He would go on to say: “I think that would be a helpful direction in the sense that if we don’t learn lessons from past [mistakes], then we are condemned to repeat the same.”

Fortunately, the Supreme Court agreed with him. On June 14, 12 of the 15 justices voted to grant the NUJP petition and pave the way for live coverage of the Ampatuan trial. Quoting part of the decision, Supreme Court spokesman Midas Marquez said “it is about time to craft a win-win situation that shall not compromise rights in the administration of criminal justice, sacrifice freedom of media rights and interfere in the integrity and solemnity of judicial processes.”

But there would be a catch: The high tribunal issued what amounted to a draconian array of restrictions for the media outlets which sought to carry the trial’s events live. Among these requirements would be non-stop airing of the trial’s hearings from start to end with no commercial interruptions. There would be only one camera in the courtroom instead of individual cameras for the networks, among other requirements. It was clear that the Supreme Court wanted to maintain control of the trial’s coverage, including accreditation of the media covering it, among other concerns. If anyone steps out of line, Marquez forebodingly stated: “The Court will reserve its right to hold anybody in contempt for violating any of the rules enumerated in the decision.”

But the general sense, including that of media, was that the high court’s guidelines were so stiff, in effect, making a live coverage of the trial senseless, to say the least, if not impractical and fraught with uncalled-for pitfalls, at the worst—for the carrying broadcast stations, in particular. It was evident that the Court and media had to find a common ground and come to an agreement to prove that our justice system works and freedom of the press responsibly exercised serves and advances, rather than frustrates, the cause of justice.

The clamor for live coverage is really a call to vigilance, to make sure that justice is done and to show that the law equally applies to all, regardless of their power or lack thereof. As President Aquino reminded us, through the live coverage of the Ampatuan trial, the Filipino people would “find out what transpired, where the possibility came from to produce such an atrocity, and what steps should be done to prevent [such a thing] from happening again.”