Another New Year, another AFP chief

Let me commend the Philippine Navy’s Civil Military Operations Group headed by Col. Edgar Arevalo for remembering the families of their men stationed on Ayungin Shoal aboard a World War II relic, the BRP Sierra Madre. For our soldiers who serve the nation in the loneliest outpost of the Armed Forces, nothing does more for morale than knowing that their families are cared for and looked after especially during the holiday season when family reunions are an important part of any Christmas celebration. More than medals or commendations, these gestures of concern and affection contribute significantly to building up loyalty and a greater sense of belonging in the military organization.

Last June, Lt. Gen. Lauro Catalino dela Cruz, the commanding general of the Philippine Air Force, hosted a dinner in honor of former chiefs of the PAF and their ladies. It was one of several pre-anniversary activities of the command in preparation for Air Force Day in July.

In one of our private moments before sitting down for dinner, I asked him what was the latest on fighter jet acquisitions for the Air Force in light of presidential pronouncements on the same. His reply was that the PAF was preparing to acquire the Saab Gripen, a multi-role fighter plane manufactured by a Swedish company. My initial reaction was a combination of delight and skepticism considering that for so many years we had been tied down to what Uncle Sam offered in terms of jet fighters. F-5 Freedom Fighters and the F-8 Crusaders readily come to mind. Still I thought that if we were going to expand our horizons and see what others had to offer, the nation and our Air Force would benefit from the experience of new arrangements and technologies.

The FA-50 that is now the subject of negotiations with South Korea is a lead-in fighter plane manufactured by South Korea’s Korean Aerospace Industries. It is part of a family of advanced jet trainers with limited capabilities and weaponry. The term “lead-in” indicates its primary role: it prepares you for eventual multi-role fighters like the Lockheed F-16. Incidentally, Lockheed is a partner of Korea Aerospace Industries. Do you get the drift?

The Swedish training program does not include lead-in fighters. They rely on simulators along with basic jet trainers that prepare you for the multi-role fighter.

The latest news on the fighter jets indicates that the defense department has recommended to the President a 52-percent down payment of almost P10 billion for a package of 12 FA lead-in fighters. By the way, the department has omitted the full terminology of these jets. They are LIFT aircraft: lead-in fighter trainers.

Let us set aside for a moment aircraft capabilities and training doctrines.

The question that must be answered is: Why are we asking the President to allow a down payment of 52 percent of the entire cost when the law allows only 15 percent, with the balance after delivery of goods? Actually the answer to this query should have been part of the press release. Whenever we operate outside the law, Juan dela Cruz is entitled to know the circumstances that may justify any exception.

In his remarks during the 78th AFP Foundation Anniversary last month, President Aquino vowed to acquire more planes and ships to sustain the modernization program of the military organization. No other president has done more than Mr. Aquino to upgrade the capabilities and equipment of the Armed Forces. But while he has done much in this direction, he has also contributed to the stagnation of the Armed Forces as a professional military organization.

At the start of his presidency, there was a glimmer of hope that he would put an end to the pernicious “revolving door” policy of his predecessor in the appointment of AFP chiefs. However, in January 2012, he vetoed a bill ratified by Congress providing for a fixed term of office for the AFP chief of staff and major service commanders. His action has resulted in maintaining essentially the same record as his predecessor President Gloria Arroyo who had eleven chiefs in her 10 years in office.

* General Bautista retires in July this year; he would have served for 18 months. 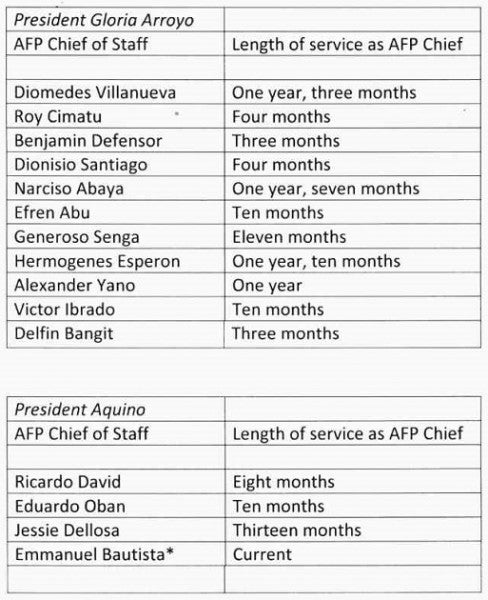 I have always believed that the “revolving door” policy on the leadership of key AFP commands has been extremely detrimental to the organization, not only in terms of efficiency and effectiveness, but more so in terms of promoting and enhancing the professionalism of the officer corps. It served the purpose of Mrs. Arroyo to hold the entire officer corps hostage as the scramble for position and favor made it almost impossible to create a sense of loyalty to the institution rather than to an individual.

One of the most respected figures in Philippine management circles is Washington Sycip, founder of Sycip Gorres Velayo and Co. (SGV &Co.) and the Asian Institute of Management (AIM).

Three years ago, Mr. Sycip was the guest speaker at the annual general membership meeting of the PMAAA Inc. He started his speech with a brief statement about his short military career, after which he cautioned: “You may regret having me with you today.” He then proceeded to provide his impressions on one of the issues affecting the AFP: “We who are in the private sector wonder about the rapid changes in the military leadership. In the private sector, we will not have CEOs with one- or two-year terms if we want reforms or proper planning for the future. Is it possible to carry out reforms in an organization as large as the Armed Forces when there is such a rapid change in the leadership?”

My own question: Is the AFP condemned to short-term leadership for the rest of its natural existence?