It all started from a rather banal self-talk as soon as I was appointed chair of the commission: If the Commission on Audit (COA) is an “independent constitutional body” and therefore not under any of the three branches of government, from whom then should we take our bearings and to whom shall we be directly responsible?

I chuckled when just as immediately, my lawyer’s mind reproachfully reminded me, why, the Constitution and the people, of course!

The Constitution grants the COA the “power, authority and duty to examine, audit, and settle all accounts” of government.

To carry out this mandate, the Constitution bestows on the COA the “exclusive authority to define the scope of its audit and examination, establish the techniques and methods required  therefore, and promulgate accounting, and auditing rules and regulations.”

This is the expression of the “ideals and aspirations” of the Filipino people who ordained the Constitution, in whom “sovereignty resides” and from whom “all government authority emanates.”

Without fear or favor

Carrying out our mandate was a matter of course. I knew that from Day 1 of my tenure, I would give flesh to it faithfully without fear or favor. Giving flesh to the sovereignty and supreme authority of the people, however, was a challenge.

I thought that our people should have a voice and hand in the work of the COA; after all, it is their money we are accounting for and see to it being spent properly for their best interest and welfare.

Most of all, it is the people to whom all of government is ultimately accountable. As such, they should get a palpable and direct experience of what it means and takes to exact accountability from their public servants.

Thus, the idea of a Citizen Participatory Audit (CPA) was born.

I put up the first component, the Citizens’ Desk, under my office in my first month. It was crude and mano-mano. There was a secondhand cell-phone “hot line,” manned by a dedicated staff, for text-in reports, comments and suggestions from citizens.

The desk revealed many “dark secrets,” as it were, and generated a substantial number of positive leads, including complaints against our own auditors, which we pursued either in regular or special audits. I was particularly amazed at the wealth of information received and the willingness of citizens to come forward.

Today, the Citizens’ Desk is being automated to handle the increasing flow of reports and track action more efficiently.

Once the Citizens’ Desk was up and running, I worked with a core group to thresh out the mechanics of the second component, the participatory audit itself.

The first international conference I attended as COA Chair was, serendipitously, a symposium on “Effective Practices of Cooperation between SAIs and Citizens to Enhance Public Accountability” held in Vienna in July 2011 and sponsored by the International Organization of Supreme Audit Institutions.

While there were various forms of cooperation presented, there was virtually none on participatory audit. Hence, I took the opportunity to mean that we were in the right direction and that the COA was perhaps being providentially tasked to lead in this area.

And so our core group hammered on to develop a pilot run. The program looked good and feasible on paper. Essentially, we would undertake a short-cycle performance audit of a government project that is of high impact and with direct benefit or concern to the poorest of our people.

We would include two or three ordinary citizens in the audit team, preferably from the same locality as the project site, and capacitate them to perform non- or low-technical aspects of the audit. 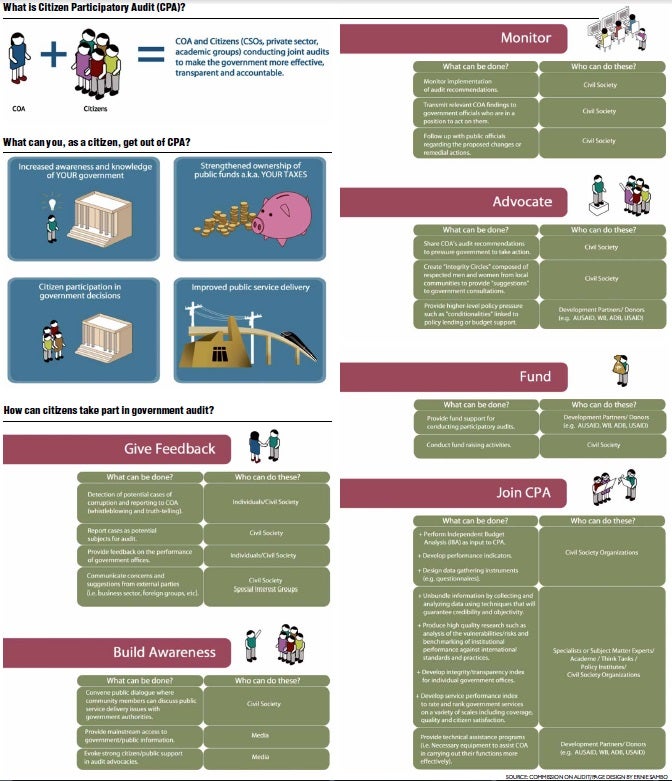 This way, they would see for themselves the status of the project and how they may contribute to its better performance. We also designed a learning component to educate them on the rudiments of assessing government projects in terms of the three basic Es of auditing—effectiveness, efficiency and economy.

They can thereafter apply the three Es to any other project in their locality and call our attention for deeper scrutiny, or their local governments for appropriate action, should they find less than diligent or faithful execution. This would certainly be, in the concrete, positive people power for accountability.

Taking cue from the state policy to “encourage nongovernment, community-based, or sectoral organizations” to “promote the welfare of the  nation,” we would partner with a civil society (CSO) and/or nongovernment organization (NGO) to assist us in selecting our citizen auditors in a structured and organized manner, on a no-fee and voluntary basis, and with utmost assurances of integrity and democracy in the process.

We underscored that the CPA would be under the direct control and supervision of the commission at all times and that there would be no parallel audits by the citizen auditors, CSO or NGO.

Our remaining hurdle was funding and selecting our NGO partner.

Around this time, the Department of Budget and Management (DBM) was firming up its Open Government Partnership Initiative. I informed Budget Secretary Florencio Abad of the CPA and proposed its inclusion, for funding and technical support, in the Public Financial Management Project (PFMP) that the DBM, the COA and the Department of Finance were collaborating on with various development partners to improve the efficiency, accountability and transparency of the use of public funds.

In 2012, the Australian Agency for International Development  (AusAID) gave us the breakthrough by funding our pilot run through the  Affiliated Network for Social Accountability in East Asia and the Pacific  (Ansa-EAP). It was like prayers answered in exactly the way we needed.

We launched the CPA in November 2012 at the Camanava Flood Control  Project Site, with Secretary Rogelio Singson of the Department of Public Works and  Highways, AusAID and Ansa-EAP. The CPA has since been included in the PFMP as an integral auditing reform.

Upon the invitation of the World Bank, we have also presented the CPA and shared our experiences in various fora abroad, notably in Nepal, Estonia and Tanzania, and received great interest from our counterparts. It was humbling to know that the world was taking notice.

It has been a great one year for the CPA. What we planned to be a single pilot audit has become three as of this date, with the addition of the Solid Waste Management in Quezon City and Barangay Health Services in Marikina City.

The results of our CPAs will be consolidated in a special report as well as incorporated in the audit reports of the agencies concerned.

Meantime, we are finalizing templates and operating manuals to replicate the pilot runs nationwide at the soonest possible time.

We are also identifying additional projects for inclusion. With the recent spate of natural calamities, audit of disaster aid is at the top of our list.

It is a great honor and privilege to have been chosen the “Bright Spot” at the Open Government Partnership Summit in London last Nov. 1. This award encourages us all the more to institutionalize it in the COA and include more citizen auditors in the experience.

For it is only with continued vigilance and involvement of citizens in government audit, through the CPA or other  open government measures, that true accountability and transparency in the  use of their money can be achieved.

The COA, together with its partners and supporters who made the CPA a reality, are but instruments  of change and mere agents of the sovereign people. To them and to all who believe in and support the CPA, we dedicate the Bright Spot award.

(Maria Gracia M. Pulido Tan is the chair of the Commission on Audit.)