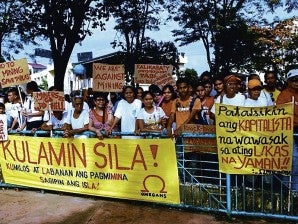 RESIDENTS of Tablas in Romblon province stage a rally in Odiongan town to protest a plan by Ivanhoe Philippines Inc. to undertake mining exploration on the island. KURT TAN/CONTRIBUTOR

In the narrative of Mindanao, big business is often portrayed as the bad guy, concerned only with the bottom line. [This also applies to other parts of the country.] So we hear of big businesses that bribe government officials to get favors. We see local communities and NGOs fighting companies that ignore human rights and defile the environment.

Yet, big business and poor communities share common aspirations. Businesses desire genuine progress to enhance the market for their goods and services. The poor want genuine progress so they can find work and improve their livelihoods.

Both detest the uncertainty and insecurity brought about by corruption. And both are fearful of a future filled with persistent violence and conflict. The last one is particularly significant, because the business of peace is everyone’s business.

There are different ways to attain the progress and peace that each one seeks. Big business and communities will devote their energies to strategies they know best. The question is why cooperation is seldom struck between parties that share so much in common. How long must we wait for big business to throw its weight behind the swift resolution of decades-long conflicts? How long will it take for civil society to recognize the powerful role that business can play?

Not business as usual

On May 5, business groups from the energy, extractive and agribusiness sector together with civil society and local government executives agreed at a national caucus to promote conflict-sensitive business practices or CSBP.

CSBP points to actions that businesses take and communities demand to ensure that investments and operations do not provoke or intensify violent conflict.

The practice is not only relevant to conflict-affected regions such as Mindanao, particularly the Autonomous Region in Muslim Mindanao, but is also applicable in all conditions and types of conflict, whether horizontal (community and clan-level violence) or vertical (rebellion and insurgency) in nature.

The caucus follows a similar agreement between the Mindanao Business Council and International Alert UK, an international peace-building organization that has worked extensively with energy and mining giants such as Shell, British Petroleum and Anglo-American.

The concept of conflict-sensitive business gained traction following the entry of extractive, energy and agribusiness companies across the country. These new investments create both opportunities and risks for improving the living standards of the poor and excluded in our society, and the ability of local authorities to govern local economies.

However, there are risks arising from eruption of violence and conflict in the areas where companies operate – increased incidence of illegal ejection or displacement of communities; inducement of graft and corruption; and, forcible use of labor.

Some of these issues have surfaced in several disputes between companies and communities in the mining sector. Oftentimes, rival communities have been lured into disadvantageous business arrangements with the collusion of local government executives and politicians.

Drawing from experiences in the energy, mining and agribusiness sectors in Mindanao and from other countries in Asia, Africa and Latin America, a road map was agreed to subscribe to a set of “red flags” or warnings of heightened risk that businesses should be aware of.

Local communities and councils stand to gain most from the promotion of practices that can guide them in negotiating with business firms that enter their communities. Conflict-sensitive practices can also strengthen the protection of local communities from violence.

For example, business firms often view “security” as a marginal cost that merely protects their assets. This definition makes entrepreneurs prone to hiring abusive security guards or providing local paramilitary units. Looking at security with a “conflict lens” requires companies to plan and structure their security with all people in the community in mind, sensitizing themselves to the reality that investments can indeed become sources of violence.

There is a strong business case to employing conflict-sensitive approaches. When companies fail to adequately assess and adapt their operations to situations of conflict, their operations can result in mishandled relationships with both communities and consumers, and investors lose out in the process.

The eruption of disputes between investors and local communities has led, too often, to the withdrawal of investment plans, a halt to operations and stagnation of local incomes and revenues. Disputes also led to direct and indirect costs to the companies – litigation risk, displacement of communities, violations of human rights and threat to life and property.

Among the groups involved in the caucus were members of the Mindanao Electric Power Alliance which committed itself to the red flags early this year. One of its key members is Aboitiz Power.

Aboitiz Mindanao vice president Manuel Orig said the firm was beginning to realize the need for constant dialogue with community stakeholders to prevent conflict and the challenge of reframing the way in which businesses operate.

Aboitiz has begun to explore multistakeholder governance mechanisms that allow local executives and civil society to participate in assessing its compliance with the legal and environmental rules set out by central authorities and local governments, and in meeting the social needs of local communities.

Good conflict-sensitive practice abounds elsewhere. Communities and companies have been able to strike fairer contract-growing agreements with some banana plantation companies in Cotabato and Maguindanao through dialogue.

Big fisheries companies have also been able to secure their operations against local conflict by contributing to the expansion of marine-protected areas in Lanao del Norte and Zamboanga.

The diplomatic community is also providing conflict-sensitive advice to companies. The British embassy, for example, circulates a human rights and business toolkit among British companies wanting to invest in the Philippines. The Center for Development Management of the Asian Institute of Management, for its part, has entered into an agreement with International Alert UK (Alert) to extend learning and improve skills in CSBP. Alert is the author of a comprehensive toolbox for conflict-sensitive practices in the extractive sector which is being adapted in the country.

Business certainly stands at a critical juncture. In the face of energy, mining and agribusiness investments spreading across Mindanao, some communities have been drawn into inter or intra tribal and clan wars in the rush to enter into partnerships with firms. In other cases, companies have tried to evade laws and rules on the exploitation of land and other natural resources by making illicit payments to local governments and by provoking divisions within communities and ignoring the legal liabilities.

Yet, while the role of business in ending conflict is no longer contested, a shadow remains over the ways in which businesses operate. Business can trigger or fuel conflict if it ignores the local context and fails to consider the impact on communities and people’s access to land and other resources. It is therefore necessary for business to realize that it needs to act responsibly and inclusively.

For civil society engagements with business are by no means a new concept. To be sure, it is a word in action – being tested, shaped and recast by stakeholders on the ground, especially in light of corporate social responsibility and other “social” projects being implemented. Yet, the tendency to polarize is still there.

Civil society is often the first to raise an alarm or to oppose investments and operations that are seen to harm the environment or violate human rights. But there are plenty of cases in which consultations fell short of objectives because of inadequate focus to buttress campaigns with concrete examples on the impact of new investments and businesses on communities.

Businesses play the same game, labeling civil society or belittling the latter’s capabilities. They fail to understand how most of the recent positive changes in the business environment in which they operate can be traced to efforts by civil society to fight corruption and promote good governance.

Despite these critical issues, the shift to engagement is becoming inexorable. Vic Lao, chair of the Mindanao Business Council (MinBC), spoke of how the group wanted to strengthen its credentials to its constituents so civil society will find it important to work with the council.

Business associations and firms are beginning to recognize CSBP as an alternative filter to “survive” in a conflict-setting. A strong case in point is the Paglas Group of Companies that manages a profitable banana plantation in central Mindanao. Paglas Group notes how it is able to function normally in abnormal conditions, making a profit, contributing to wealth creation and helping strengthen the prospects of peace and stability.

Big business can certainly play a more strategic role in mediating violent conflict, including the sort that emanates from rebellion or social inequities.

MinBC has hosted events that promote dialogue between insurgent groups and business firms. At a dialogue between the Moro Islamic Liberation Front and MinBC officers and members in Davao in February, the two groups found common ground in decrying the centralized economic governance of Mindanao by “imperial Manila.” It is exciting to witness insurgents and businessmen grappling with issues such as wealth sharing, fiscal decentralization and the devolution of franchises.

There is a clear momentum behind conflict-sensitive business practices. Some companies like Aboitiz have expanded their definitions of stakeholders to include not just those who are for, against or neutral vis-à-vis energy projects but also those with potential interest in the project or those who have a claim to its benefits.

The creation of a governance mechanism would allow an in-depth exploration of issues with stakeholders and create the means for shared actions to address troubles that arise from investments and business operations.

(Nikki de la Rosa is the Mindanao program manager of International Alert, a United Kingdom-based international human rights and peace-building organization. Alert is working with agribusiness, mining and energy firms in Colombia, Sri Lanka, Nepal, the Horn of Africa, the Baku-Tbilisi-Ceyhan pipeline in Azerbaijan and Mindanao.)