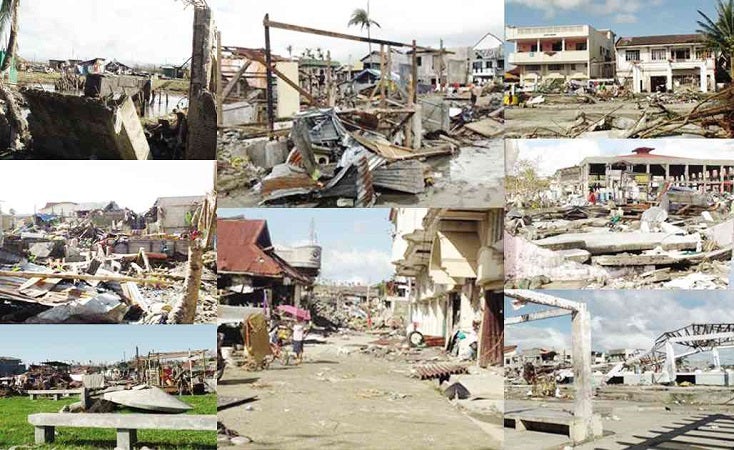 A WALL of water destroyed areas in the business district of Basey up to 100 meters from the shoreline. Houses and business establishments lay in ruins. CONTRIBUTED PHOTOS

Supertyphoon “Yolanda” (international name: “Haiyan”) made landfall in southern Guiuan, Eastern Samar, at about 6 a.m. on Nov. 8, packing near-center maximum winds of 230 kilometers per hour and gusts of up to 270 kph. It moved west-northwest at 35 kph and at about 8 a.m., it was some 100 km south of Tacloban City and Basey.

Places confirmed to be significantly affected by the storm surge, to date, were the coastal towns of Hernani in Eastern Samar; Marabut and Basey in  Samar; and Tacloban and nearby coastal towns in Leyte province.

Water receded to a very low level, exposing the bottom of the sea, before the big wave (storm surge) came. The bathymetry (depth of water) between the town of Basey and Salvacion Island or Jinamok, about 1.5 km southeast of Basey, varies between less than a meter and a little above 2 meters during normal conditions.

The low water level lasted about five minutes, according to observers’ account. Then the big wave (storm surge) came rushing toward the town with Salvacion Island serving as a wave breaker.

Some observers’ accounts referred to three big waves (the first wave was the biggest), which they said were the surge itself, occurring in succession and destroying houses and killing people.

(Nov. 8), steadily increasing in strength and veering toward the northeast (kabonghan) at about 7 a.m. At about 7:30 a.m., it suddenly shifted to the east (dumagsa).

This was the wind shift, which the local fishermen believed signaled the rise in sea level or storm surge. (Kapag ang hangin ay mag-wala—wind shifts and turns to the left).

True enough, at about this time, the very strong east wind of Yolanda was blowing perpendicular (at right angle) to the coasts of Tacloban and Basey. 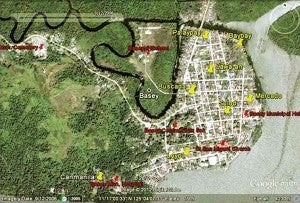 According to many residents, seawater started to rise, slowly at about

The strong winds from the east caused the gradual piling up of water at the coasts (slow rise in water level). The rapid rise in seawater was due to the storm surge itself and the big wind waves atop the surge caused the destruction.

Accordingly, the storm surge came in as a fast-moving (with some hissing-like sound), swirling, boiling-like, black water, piling up on the ground (locally called lapok or hanang [or malapot na putik]—from the silt or sedimentation formed at the mouth of the rivers of Basey).

When a wave (including a storm surge) reaches shallow waters, it amplifies, breaks up and appears to grow bigger, scraping the sea bottom, thus transporting and mixing the silt (lapok) with the wave.

Before the surge receded, the seawater appeared to be rotating in a counterclockwise direction (This may be due to the surface wind speed and direction of the typhoon, the shape of the coastline and the Coriolis force, etc.). Many observers believed that the water receded as fast as it had risen.

The surge engulfed almost all of the town proper (poblacion) of Basey. Seawater level reached up to the second floor of some houses near the shores (about 3.5 m from the ground floor) to just a few centimeters at the higher ground of the town. In a house in the inner part of town, near a river about 250 m from the shoreline, the height of water was 2.45 m (8 ft).

However, the destruction of houses and other properties that could be directly attributed to the rampaging water was confined to certain areas from the shore—several meters inland along the coast.

At the northern part of the town, particularly Barangay Palaypay and part of Barangay Baybay, houses of light materials like nipa, cogon and bamboo, and medium-built houses (wood and GI roofing) were destroyed by the surge up to some 280 m from the seawall and the river, which serves as the northern boundary of the town proper.

Palaypay is a deltaic plain at the confluence of two rivers (Buenavista and Sawa Rivers) that flow into the San Pedro Bay. The northeastern part of Baybay abutting Palaypay is a newly reclaimed area. This part of town is a relatively low-lying, flat area.

The greater part of Baybay, which faces the San Pedro Bay, is the major business district and consists mainly of medium-built houses to “engineered” houses of strong materials (concrete and mixed materials).

The storm surge damaged areas up to 100 m from the shoreline (seawall). This part of town, including Barangay Mercado, probably bore the brunt of the storm surge and destructive winds, being the eastern frontal plank of the town relative to the typhoon’s path.

The first row of houses fronting the shoreline was the first to be destroyed. The succeeding houses were impacted by the surge and debris from houses in front of them, thus following a sort of “domino effect” or pattern of destruction until the water reached higher ground or hit stronger structures, or until the wave energy dissipated.

SAN PEDRO Bay where Tacloban City and Basey are located.

From here, the damage to structures was visibly due to strong winds: Houses were unroofed but still standing or otherwise intact. The boundary between structures destroyed by the storm surge and strong winds, and those destroyed by strong winds alone were sometimes distinguishable from this damage pattern.

The damage due to the surge was confined to some 50 m from the seawall. The ground gradually rises from there until it reaches the hills, where the church, elementary school and municipal hospital are located.

Other coastal barangays outside the town proper followed the same damage pattern but the damage from the shore goes further inland due to the predominance of light- to medium-built houses in these areas.

There appears to be no local name for a storm surge. How can then one relate the expected seawater level rise to a storm surge?

Some misconstrued the storm surge or the rise in seawater level as an ordinary spring tide (when the moon comes closest to the earth resulting in an extreme high tide called the Proxigean Spring Tide, locally called dulok or extraordinary high tide).

Some of those who were aware of the predicted rise in sea level expected the storm surge to be similar to that of Typhoon “Undang” in 1984. The water level rose about 2 m in some areas during Undang’s passage, but the casualty and damage to property paled in comparison with those of Yolanda’s.

They said they were able to survive Undang’s storm surge. Even their one-story houses then withstood the ravages of Undang but not this time.

Misuse of the term

People get confused with this type of information. They get the notion that a storm surge is a benign event and won’t get alarmed if the real storm surge occurs.

How can we reduce risk and eventually, damage and casualty from storm surges?

According to disaster risk reduction parlance

Risk (R) can be lowered by reducing the hazard (H) and/or vulnerability (V), and increasing the capacity (C).

Reducing the hazard (H): Hazard, in this case, refers to the strong winds of the typhoon, the storm surge and heavy rains.

There is no existing technology to weaken the typhoon. However, reducing the intensity of the storm surge impinging on the community may be feasible, but at a considerable cost and imagination.

At present, Basey has a 2-m high seawall. It was not breached by the surge but overtopped by it.

Increasing the capacity (C): Capacity is a combination of all strengths and resources available within a community, society or organization that can reduce the level of risk, or effects of a disaster.

This may be measured by the presence of the following:

The interviewees (survivors) were unanimous in saying that the typhoon warning was quite adequate as far as the strength of Yolanda was concerned. Many, especially those in the rural areas, said the storm surge or the extraordinary rise in seawater level was mentioned in the warning, but they preferred to ignore it because of their lack of basic information about it.

It appears that there is a dearth or lack of information and so many misconceptions about storm surges. There should be a concerted effort and advocacy toward this end.

A term or local name for storm surge that would connote danger or urgency should be coined and popularized (such as daluyong or delubio).

The present universally recognized term, storm surge, may “ring a bell” in the future after what Yolanda and its accompanying storm surge did to Tacloban and nearby communities.

A storm surge is a rare phenomenon. Not all typhoons generate storm surges. Tropical depressions and tropical storms don’t generate surges. Don’t use “storm surge” in vain. This might lead to the proverbial “boy-crying-wolf syndrome.” Call a spade a spade.

(Leoncio A. Amadore, Ph.D, is the lead researcher of the National Research Council of the Philippines-assisted projects “Comprehensive risk assessment of the physical, social and economic impact of tropical cyclones” and “Development of a conceptual and a quantitative typhoon damage model.” He is a professorial lecturer at the Institute of Environmental Science and Meteorology, College of Science, UP Diliman. He visited Basey a few days after Yolanda struck.)

Read Next
Editorial cartoon, December 1, 2013
LATEST STORIES
DAY6 is for everybody
Mos Burger to open in Manila; teases with a pop-up
In ‘Jojo Rabbit,’ Comedy and Drama Collide
How to help the Taal evacuees
Margot Robbie talks about filming ‘Bombshell’s’ disturbing sexual harassment scene
MOST READ
OSG plea to revoke ABS-CBN franchise ‘a duplicitous move’ – Lacson
It’s too early to present Duterte’s ‘legacy’ – Lacson
Jake says relationship with Shaina ‘goes beyond physical attraction’
Steam emission over Taal’s main crater ‘steady’ for past 24 hours
Don't miss out on the latest news and information.

DAY6 is for everybody

Mos Burger to open in Manila; teases with a pop-up

How to help the Taal evacuees