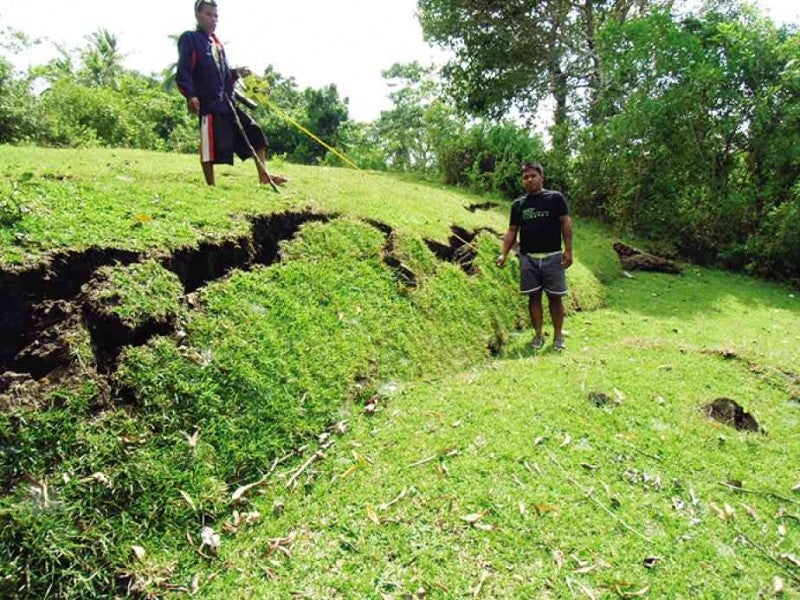 SECTION of the ground rupture (thrust fault) found in Inabanga town. Ground to the left of the rupture heaved 2 meters relative to the ground right of it.

Just over one-and-a-half years ago, I wrote a piece in this section about the magnitude 6.9 Eastern Negros Earthquake of Feb. 6, 2012. I ended that article by posing a question: “Where are the other blind faults?”

As if in a movie sequel, we are now provided with an answer, albeit, unfortunately, through an even stronger earthquake this time striking the neighboring island of Bohol.

Three days after a magnitude 7.2 earthquake hit Bohol Island on Oct. 15, I again found myself traversing rivers, climbing hills, mapping road cuts, discussing with villagers (comforting perhaps is a more appropriate word) and hovering on a Huey—only this time on and over another island, Bohol. 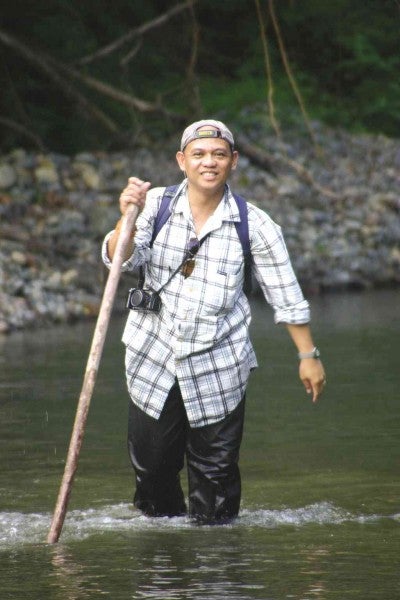 In the morning of the day the earthquake struck, my younger son unassumingly FYI-ed me a half question while on our way to a family luncheon: “Dad, there was a strong earthquake just a while back. Have you heard?” Passively answering him in the negative, I dismissed the news as simply one of those reported almost daily—earthquakes are just so common in the country, the Philippine Institute of Volcanology and Seismology (Phivolcs) records about 20 per day.

I somehow pursued the issue and asked him where the earthquake was. When he said Bohol and added that there was great damage per initial reports, I started burning the SMS lines with colleagues in the business of earthquake studies. Three days later, I started my search for the second unknown fault in less than two years.

The earthquake struck at 8:12 a.m. Different international seismic institutes reported slightly different magnitudes immediately after the quake. Phivolcs placed it at magnitude 7.2. Initial estimates of the depth of focus varied significantly. The United States Geological Survey and Phivolcs initially reported 33 kilometers, the approximate thickness of the seismogenic zone in the brittle crust usually used as a default depth while the location was still poorly constrained.

But other international seismic observatories, such as the International Seismic Network NIED (Japan) were already estimating a focal depth of 12 km. Phivolcs initially calculated an epicentral location a few kilometers south of Carmen town but later recalculated it to be in the vicinity of Sagbayan and Catigbian towns, closer to the epicentral locations already published earlier by other observatories and revised the focal depth to 12 km as well. (See epicentral map.)

In the first five days after the main shock, Phivolcs recorded over 2,000 aftershocks, several of which registered magnitude 5s, strong enough to inflict further damage to infrastructure already weakened by the main shock.

The population of aftershock epicenters showed a 30-km wide by 80-km long belt trending east-northeast from around the towns of Getafe and San Miguel in the north, down to the offshore area in the Bohol Strait toward the southeastern shores of Cebu Island. 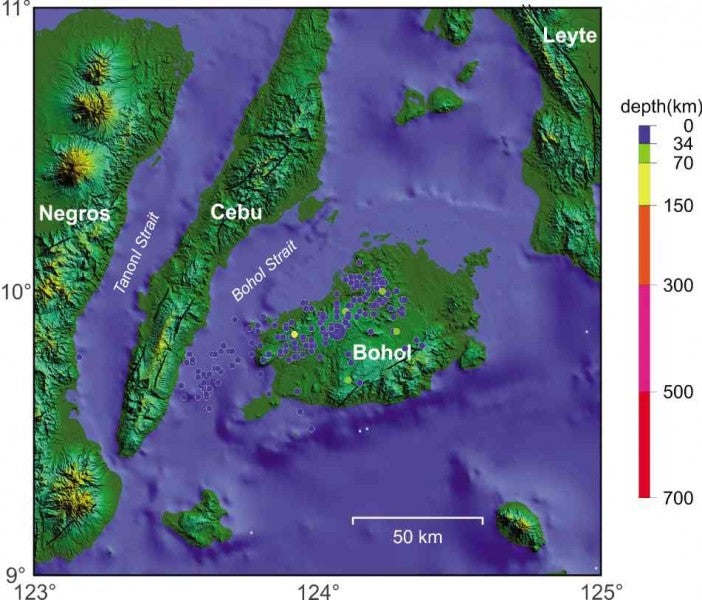 The trend of aftershock epicenters suggested an east-northeast orientation of the fault that generated the earthquake. Focal mechanism solutions computed by the different seismological observatories consistently indicated a thrust-faulting mechanism, one where over an inclined fault plane, the block above slides upward with respect to the block below.

This is the same fault mechanism that operated during the magnitude 6.9 Eastern Negros Earthquake. The calculated inclination of the fault plane for the Bohol earthquake is around 45 degrees. Theoretically, with a focal depth of 12 km, the fault should rupture the ground some 12 km either southeast or northwest of the epicenter.

With these in mind, the search was on for the geologists.

In the vicinity of the pulverized Loon church, our survey group chanced upon the team of Phivolcs late in the afternoon of Sunday the 20th. The Phivolcs group was led by Dr. Toto Bacolcol, who at that time had skipped lunch just so his team could reach Loon before dusk to check on the liquefaction area behind the church in Barangay Napo.

Asked why he had to skip lunch, he answered: “Para sa bayan, sir,” a candid reply but one that revealed his dedication to science for the country and a will to understand the cause of this earthquake, notwithstanding hunger.

This dedication paid off a day later, when he and his team made a scientific breakthrough by discovering a ground rupture in Inabanga town in the northwestern section of the island. This paved the way for the delineation of the ground trace of the fault that was responsible for the generation of the earthquake. 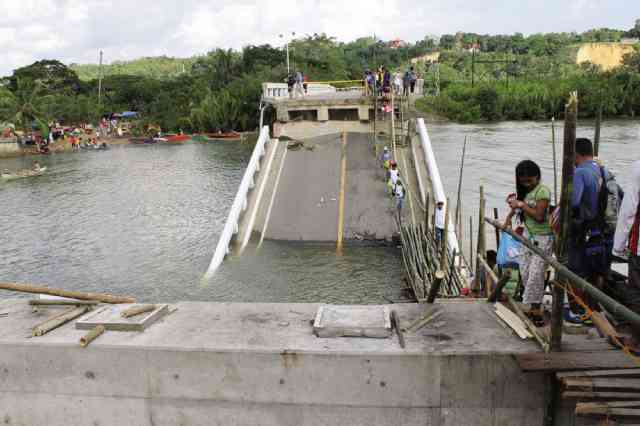 In the evening of that day, I could almost see the excitement and pride in Toto’s face when he texted me: “Doc Mar, we found the fault!” Through his dedication, it is an unknown fault no more. As I write, Toto’s team, now joined by geologists from the different agencies of government and the academe, continues to scour the island to delineate the rupture to make sure that what they found is indeed the real fault trace.

Aside from the stronger magnitude and more intense damage to infrastructure, what makes the Bohol earthquake worse than that of Negros is the destruction of centuries-old heritage cathedrals built during the Spanish period. Worst hit is the Church of Nuestra Señora de la Luz in Loon town on the western coast of a peninsula that protrudes in the southwest corner of the island.

Meeting her fate at the hands of a magnitude 7.2 tremor, the church was literally pulverized, vanishing with it all precious artwork, architecture, culture and an entire history.

Boholanons are fortunate to have a hands-on leader in the person of Gov. Edgar Chatto, who right from the start put himself on top of the situation. The governor converted Bohol’s People’s Mansion in the capital city of Tagbilaran into a command center that served as the locus of activities with at least twice-daily briefings, the afternoon sessions often lasting until midnight.

Updates and work plans from concerned government agencies as well as the private sector, including international nongovernment organizations were heard, discussed and implemented under the governor’s directions.

Volunteers poured in and helped in the relief and retrieval operations, including the grim task of pulling corpses out of limestone rubble from the collapsed churches.

Geologists involved in the business of studying active faults are often maligned as “faultfinders.” This time, these faultfinders had a more daunting role to play. Aside from assessing the damage and gathering data to understand the cause of the earthquake that often entailed life-threatening maneuvers, these geologists had to perform the role of allaying fears of residents who had become paranoid after experiencing out-of-the-ordinary phenomena, such as the seemingly endless aftershocks, the extrusion of wet sand through flooring, or the emission of unusual gases feared to be from a nascent volcano.

Scared residents—some preferring to stay in tents set up on their own front lawns and in backyards; others making do with what makeshift evacuation centers could provide—had to be calmed by informing them of the following:

After the revision of the epicentral location, people who started asking questions about a “new fault” had to be convinced that the fault was not new at all, but simply that it had not been known earlier.

So thanks, or no thanks to the earthquake, we now know that there is a fault underneath the northwestern sector of the island. And better yet, this fault, unlike the hidden fault of Eastern Negros, seems to start cooperating—by partly showing itself on the ground.

Before we boarded his Huey, our Philippine Air Force pilot warned us that we would be about to see a portion of the Chocolate Hills that was now “caramelized.”

Hovering above Sagbayan town, we could see at least a dozen hills stripped of their vegetation due to sliding of the slope mass (mass wasting) that went all around the mounds. In classical mass-wasting processes, the sliding mass creates a scar, which curves outward (concave) from the slope. The earthquake-induced erosion in the limestone hills defied theory, because in Sagbayan, sliding on the hill slopes occurred radially outward from the central peak.

This kind of erosion may be likened to the behavior of a mound of sand that when shaken, the sand particles would move down slope following a path that emanates from the peak of the inverted cone toward its flanks in all directions. Further shaking renders the mound rounder. The more shaking happens, the rounder the mound becomes.

By analogy, the Chocolate Hills, especially the rounder ones, perhaps bear witness to previous powerful earthquakes that affected Bohol Island in the geologic past.

The discovery of the ground rupture is a scientific breakthrough. As Toto puts it, it is “the holy grail of all active fault mappers.” While this is perhaps one of the greatest scientific findings from this earthquake, more important is the lesson that almost anywhere in the Philippines, an earthquake can strike anytime.

Never mind if geologists have to keep telling this over and over again. And now that we have found two previously unknown faults, should I ask the same question again: “Where are the others?”

Would this mean waiting that so short a period—one-and-a-half years—till the next unknown fault is found, unfortunately, by way of another devastating earthquake? Or should we train ourselves to admit that almost anywhere in the Philippines, an earthquake can strike anytime?

Certainly, more earthquakes will come our way, but with this mind-set, we get ourselves prepared. Let us leave the faultfinders to do their job and hope that the other faults start cooperating and show themselves, too.

(Mario Aurelio, Ph.D., is an associate professor at the National Institute of Geological Sciences, University of the Philippines Diliman. He specializes in the study of active faults and earthquakes. He thanks Bohol Gov. Edgar Chatto, PENR Officer Nestor Canda, CENR Officer Mario Aragon, MGB Region 7 Chief Geologist Al Berador, the Philippine Air Force and the Philippine Army. The GMT software of Wessel and Smith [1998] was used to plot the epicentral map.)