Climate change up close and personal 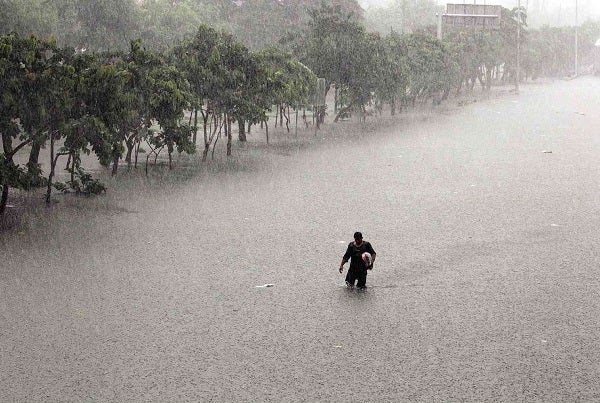 A MAN waded through a section of Osmeña Highway in Makati City, the country’s financial district, on Aug. 20, when up to 65 percent of Metro Manila was inundated due to torrential rains. Offices were closed, classes were suspended and flights were canceled. Many parts of Luzon were also flooded. AP

The heavy rains last week that caused severe flooding in Metro Manila and other parts of Luzon brought back memories of Tropical Storm “Ondoy” in 2009 and habagat (southwest monsoon) in 2012.

The metropolis was a virtual water world, the economy was stalled, people were stranded and soon the government and people from all walks of life would again discuss measures to address the flooding.

The only big difference this time was that there were fewer casualties mainly because people were more prepared, and early warning systems and technologies were working. 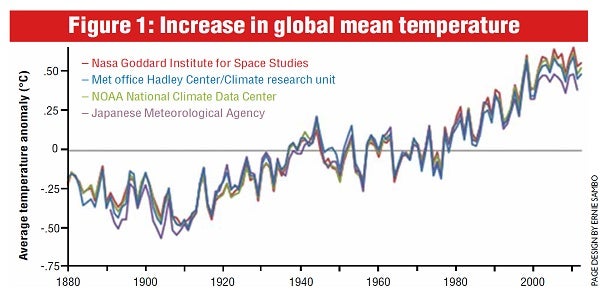 But long before incessant rains and habagat became the talk of the town because of their impact on the economy and people, about 10 years ago I had my own personal tragedy to deal and come to terms with.

Dec. 19, 2003 was supposedly an ordinary day. I was home in Pasig City fighting jet lag after returning from Washington DC a few days before.

Earlier that day, my sister, who was living next to my parents in the province, was sending text messages informing me that rain was unusually heavy and was already going on for seven days. Then the text messages stopped later in the afternoon.

The following day, Dec. 20, I got a call early in the morning from another sister who was living in the next barangay. She was crying and, with her voice breaking, informed me that mudslides had hit our barangay and that our mother had perished, with our father and other siblings still unaccounted for.

Seven days of unprecedented rain that saturated unstable lands long converted into coconut plantations caused the massive mudslides that buried many barangays on Panaon Island, Southern Leyte. In our barangay alone, the mudslides killed 27 people, including my mother and my youngest brother.

I reached our barangay on Dec. 21 after hours of walking from the town center as roads were impassable due to the mudslides.

When I reached our place, I was horrified to see most of the barangay buried in mud with debris and boulders all over the place and many injured people in temporary evacuation centers.

I was then informed that my mother’s body was recovered next to my youngest brother, a few meters away from where our house once stood.

By God’s grace, my father was plucked from the mud alive and all the rest of my relatives were safe.

It was a tragic climate-induced natural calamity that changed my life, our lives, forever. Of the 27 people who perished in that tragedy, only five bodies were recovered, including my nanay and my brother. We buried them on Christmas Day.

Extreme weather events have been attributed to climate change. This is not new. Climate change has been here for some time, hitting not only the traditional vulnerable areas like the eastern seaboard of the country but also affecting what used to be typhoon-free areas such as the Davao provinces and southern Mindanao.

There are still a few skeptics who doubt climate change, but they are now a minority. In the Philippines, 8 out of every 10 Filipinos say they have “personally experienced” the impact of climate change.

Climate change, caused by the increase in greenhouse gases (GHGs) in the atmosphere due to human activities, is a pressing development issue that is already upon us.

Primarily, as a result of rising concentrations of GHGs in the atmosphere, the global mean temperature has increased by 0.8°C above preindustrial levels. Most warming has occurred since 1970, with the rate of warming in the past decade being nearly double that of the past century. (See Figure 1.)

Even if Parties of the United Nations Framework Convention on Climate Change comply with the emission pledges made at the Conference of the Parties in Cancun and Copenhagen, warming is set on a trajectory that may likely exceed 3°C, with a possible 4°C increase as early as 2060, causing a nonlinear path of unforeseen climate events affecting global, regional and national economies. This is according to a recent World Bank study, “Turn Down the Heat.”

I don’t want to sound like a prophet of doom, but the Philippines, due to its archipelagic nature and location, is among the countries most vulnerable to the impact of climate change. It ranked third as the most vulnerable country in the world.

In all these cases, the poor have been disproportionately affected, resulting in destruction of their limited assets and livelihoods. Sixteen provinces and 4 of the 10 cities most vulnerable to climate-related impact in East Asia are located in the country.

Particularly vulnerable to a great range of climate change impact in the Philippines are agriculture, water resources, coastal ecosystems and infrastructure such as power and transport.

The rise in sea level is projected to increase by 30 centimeters by 2050, posing a direct risk to a large share of the population living along coastal areas that are dependent on coastal and marine resources.

Substantial warming of 4°C+, which by recent projections could occur by as early as 2060, would exacerbate these risks.

The increase in global temperatures is expected to accentuate cascade effects such that high-intensity storms would cause crop losses in rural areas, severe floods in lowland urban and coastal areas, damage to infrastructure and loss of basic services, and disease outbreaks in densely populated informal settlements. The most severely affected are the poorest and most vulnerable.

Projected impact of climate change in the Philippines:

Degradation of fisheries and coral reefs

Impact on agriculture is significant

A year after the tragedy, our barangay was relocated to two different places nearby that are considered geologically safe. However, after a few years, people returned to the original settlement that was wiped out by the mudslides. They, however, learned their lessons by taking the early warning system seriously and by being alert when it rains. It is still not safe but at least people are now more aware of when and where to run in case of flooding and mudslides.

It took me years to come to terms with that personal tragedy and to open up and share my story of how a climate-induced catastrophe affected and changed our lives. Since the tragedy, climate change has become both a professional and personal issue for me.

In the past 10 years, I have been professionally involved in some activities that have something to do with increasing awareness on climate change and its impact, providing policy advice to the government, and leading projects that reduce GHG emissions and improve adaptation and resilience of people to climate change impact. My personal mission has been to help save lives against climate change impact in whatever way I can.

What needs to be done

The government has taken strides to lay the foundations for mitigating risks from climate change by enacting laws, establishing institutions, preparing plans and executing them. While this is so, challenges remain in terms of scaling up the implementation of these policies and instruments.

More needs to be done to ensure that planning both at national and local levels take into account climate change and that these plans are well-prioritized and well-budgeted. Interventions must also be well-designed and implemented, and monitored.

Where people are most exposed and vulnerable, local level adaptation measures, such as preventive relocation of people residing in high-risk areas and putting them in safer areas with basic infrastructure services and livelihood opportunities need to be put in place.

Moreover, investing in renewable energy, energy-efficiency measures and sustainable transport as well as reducing deforestation and degradation are among the actions to curb GHG emissions.

In a World Bank study, titled “Getting a Grip on Climate Change in the Philippines,” the scientific evidence on climate change and its impact on the country were presented. I and a colleague from Washington DC, with a team of local and international experts, prepared the report in partnership with the Climate Change Commission and the Department of Budget and Management.

The report outlines the actions taken by the government to address the issue through increased expenditures and better institutional coordination. We also identified some challenges and forwarded recommendations over the short-, medium- and long-term to address climate change impact on the country.

The study is very timely as it comes at the midpoint of the first phase of the National Climate Change Action Plan (NCCAP) of the Aquino administration and of the Philippine Development Plan 2011-2016. It also outlines how to scale up reforms and activities in the subsequent phases of the NCCAP beginning in 2017.

Improved resilience also places the government in a better position to deal with the fiscal and economic shocks arising from disaster and climate change impact. Climate-resilient communities are able to protect the fragile sources of livelihoods and assets of the poor, while at the same time creating employment opportunities that could benefit low-income groups.

My work on climate change in the past years has opened my eyes to the devastating reality that while climate change hit the poor and vulnerable hardest, it also affects the rich and the powerful. It can paralyze the economy. This happened during Ondoy, during the habagat in 2012 and just last week—all brought the whole of Metro Manila to a standstill.

I moved to Washington DC a month ago to take a new assignment at the World Bank Headquarters. I may be away from home but I will continue my advocacy and, in whatever way I can, contribute to the climate-change agenda of the country. I can only hope for the best for the Philippines and pray that no other Filipino family shall suffer my personal tragedy.

(Joe B. Tuyor used to be a senior environmental specialist at the World Bank Office in Manila. He manages World Bank-financed projects and analytical works on environment and natural resources management, and climate change. He moved to the World Bank Headquarters in Washington DC in July. He has a BS in Agriculture degree from Visayas State University, MS in Environmental Risk Assessment from Chiang Mai University, Thailand and Universität des Saarlandes, Saarbrücken, Germany, and a certificate in lake management from Ghent University, Belgium.)