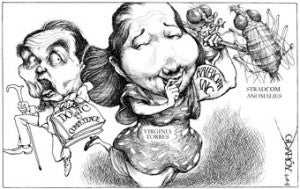 President Aquino told reporters in Brunei last week that a military confrontation between the Philippines and China would be “no contest.” In terms of military strength, China has “a great advantage,” he said. “Even in a boxing match, there’s one and half billion of them, [while] we are barely 100 million.”

All true, of course. But stating the obvious seems totally unnecessary and counterproductive, especially at this time when China seems ready to flaunt its military strength even at the risk of looking like the bully in the block. In an age when colonialism seems like a distant memory, China has been signaling its determination to assert its sovereignty over marine territories also being claimed by its neighbors—by force, if necessary. Pleading helplessness in the face of so much muscle-flexing could only encourage China to conduct further acts of intimidation.

Already in the last four months, Philippine authorities have counted at least six Chinese military incursions into Philippine territory. And on at least two such occasions, the Chinese vessels acted belligerently. On Feb. 25, for instance, a Chinese missile frigate drove away three Philippine fishing vessels anchored on Jackson Atoll by first threatening to shoot them and then actually firing three shots into the water. A few weeks later, in March, Chinese vessels threatened to ram a Philippine-commissioned boat conducting seismic studies at the Reed Bank. Then in May another Chinese vessel unloaded construction materials in Amy Douglas Shoal.

These shoals and atolls are less than 100 nautical miles from Palawan and well within the 200-mile exclusive economic zone as defined by the United Nations Convention on the Law of the Sea. As Presidential Spokesman Edwin Lacierda put it, “You are speaking of western Palawan, you are not speaking of the Spratlys,” and Palawan is not a disputed area.

What were Chinese military vessels doing 600 nautical miles from China’s nearest coastline and deep in Philippine territory? China is trying to establish ownership over the whole South China Sea. So what will it claim next, Manila Bay?

China is so confident that it will have its way with its smaller neighbors that it has announced that it would send its biggest oil rig to start drilling in the disputed Spratlys. It dismisses its neighbors claims to the Spratlys by saying there is nothing for them to claim since the area rightfully belongs to China. And consistent with this position, the Chinese government flatly denies that its vessels have intruded into Philippine territory. Chinese officials are saying in effect that China cannot be accused of intruding into its own territory.

But even as China intensifies its show of force, Chinese officials continue to reassure its neighbor that it wants nothing more than peace. In Singapore last Sunday, Chinese Defense Minister Liang Guanglie said his country was committed to “peace and stability” in the South China Sea. He said China would never threaten any country or “seek hegemony.”

Maybe China has a different definition of what constitutes peace, but firing shots over fishing vessels and pushing away research ships are not peaceful acts anywhere. Which is why Filipino officials have lately dropped all diplomatic pretense and has directly accused China of “serious violations of Philippine sovereignty and maritime jurisdiction.” Foreign Secretary Albert del Rosario has said that while the Philippines is committed to follow international laws, the 2002 Declaration of Conduct in the South China Sea forged by the Association of Southeast Asian Nations and China, under which all the parties agreed to exercise restraint and refrain from occupying uninhabited areas, was being “aggressively violated.” And because all its complaints have gone unheeded by Chinese authorities, the Philippines is now bringing the case to the United Nations.

Instead of enjoying it like one former foreign secretary advised in regard to another violation of Philippine sovereignty, Filipino officials are now crying rape, and making the whole world know who is doing it. If China believes it can ignore the protests of a small nation with hardly any military capability to speak of, it may yet think differently if the international community is sufficiently roused to condemn its naked aggression.