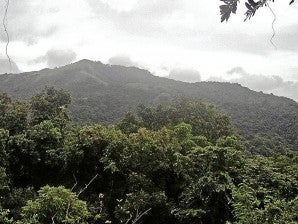 The Philippines is both a hotspot and a megadiversity area, making it a priority for conservation. The country’s forests are habitat for more than 6,000 plant species and numerous bird and animal species, including the endangered Philippine Eagle and the Visayan warty pig.

Forests also serve as home to some 12 million indigenous peoples. They support millions of Filipinos who depend on them for livelihood.

However, despite, or perhaps because of their richness and importance to people, forests face continuing destruction.

The Philippines is among the countries that are losing their forest cover fast, ranking 4th in the world’s top 10 most threatened forest hotspots. If the deforestation rate of 157,400 hectares per year continues, the country’s remaining forest cover will be wiped out in less than 40 years. The area lost to deforestation every year is twice the land area of Metro Manila.

It was the Food and Agricultural Organization’s Forestry Resources Assessment (FAO-FRA) that came up with the most widely used definition of forests. It says tree plantations, and bamboo, palm and fern formations, logging roads and open spaces adjacent to logging sites of corporate forest concessions are considered “forests.”

The Department of Environment and Natural Resources (DENR) adopted the definition in 2005 through Memorandum No. 005.  That year, the department’s Forest Management Bureau and the FAO-FRA announced that the Philippine forest cover increased to 7.391 million ha from 7.168 ha in 2003.

In 2010, our forests supposedly increased to 7.665 million ha. This covers 25.6 percent of the country’s 30-million ha land area, way below the 54 percent ideal forest cover for tropical countries.

These numbers may not represent the real on-ground forest cover. The Center for Environmental Concerns-Philippines and Environmental Science for Social Change said the additional categories made by the FAO-FRA were not forests. Another reason to doubt the figures released by the FMB and FAO-FRA is that areas that are expected to revert to forests but are not yet stocked with trees were included in the calculation. Government statistics may show that there is an increasing forest cover but on the ground, the country may be actually losing our forests.

Centuries of colonial rule, commercial logging, corruption and misguided government policies brought our forests to the brink of total destruction. 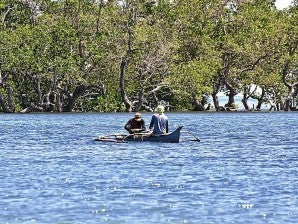 MANGROVE forests in the Philippines are at a critical level.KALIKASAN PNE

Forests covered at least 90 percent of the country’s total land area during the precolonial period. Cultural and religious traditions of the people then allowed the forests to regenerate even if they were used to supply food and building materials. During the Spanish colonization, trees were felled to build roads, bridges, docks and ships for the galleon trade. Forests were replaced by sprawling haciendas owned by Spanish friars, officials and rich families.

Large-scale, export-oriented commercial logging was introduced by American colonizers. At the start of the American occupation in the 1900s, the Philippines had 21 million ha of old-growth forests covering 70 percent of the land area.  Logs were exported mainly to the United States and used to support the mining industry set up by the Americans. By the 1940s, only 9 million ha of forests covering 30 percent of the Philippine land area were left.

Deforestation further worsened during the Marcos regime. The logging industry was controlled by foreign companies and the local elite, some even holding public offices. Timber Licensing Agreements (TLAs) were given out by the Marcos regime to loyalists. From 1965 to 1986, the Philippines lost 7 million ha of forests.

TLAs were adjudged unconstitutional under Cory Aquino’s presidency. But instead of immediately revoking the TLAs, a “phase-out” policy was adopted to solve the problem. During the Arroyo administration, however, at least five TLAs were reinstated in 2005 and 2008, including the TLA of Surigao Development Corp., allegedly owned by a senator.

Data from the FMB show that combined reforestation efforts by the government and the private sector are not enough to arrest the rapid deforestation.  Previous administrations had been weak in compelling timber license holders to fulfill their obligation of reforesting concession areas.

Although the national government allocates funds for reforestation, projects have been largely dependent on foreign funding. Moreover, opportunities for rehabilitation created room for graft and corruption. On Sept. 22, 2010, Sen. Franklin Drilon exposed on national television the alleged use of P1 billion in DENR funds for the May 2010 general elections.

Disasters such as floods and landslides that result in loss of life and livelihood are the most visible and devastating effects of forest destruction. The most unforgettable of these is perhaps the Ormoc flood on Nov. 5, 1991, which killed almost 8,000 people.

The Citizens’ Disaster Response Center noted that at least 27 floods and 17 landslides happened each year in 2000-2010. In the same period, at least 1.6 million people were affected each year by floods, and 24,212 by landslides. Damage to agriculture and infrastructure ran into tens of millions of pesos a year.

Human rights violations related to deforestation include land grabbing, militarization, abuse of the free and prior informed consent requirement and killings. Indigenous peoples are the usual victims because their ancestral domains are generally found in forests.

Antilogging leaders such as Alberto Pinagawa of Misamis Oriental and even forest workers like Elpidio Malinao of UP Los Baños and botanist Leonard Co were killed while actively involved in forest protection.  Joey Estriber, a known antilogging advocate in Aurora, is a victim of enforced disappearance.

There is a dearth of accessible data on the state of our forests. Estimates using available data, however, show that until now, commercial logging is still the leading cause of deforestation compared with illegal logging, kaingin and diseases.

Mining also threatens our forests. Through the Mining Act of 1995, mining companies are given timber rights, which allow them to cut trees inside their concessions. As of March 2011, more than 1 million ha were covered by mining permits and applications.

Reducing Emissions from Deforestation and Degradation (REDD+) is an international policy proposed by developed countries to mitigate the climate crisis supposedly through forest protection. Plantations were included in the forest definition within the REDD+ framework. Upon implementation, REDD+ will reward perpetrators of deforestation such as commercial loggers by encouraging them to expand operations and turn natural forests into plantations to increase their profit.

Biofuel plantations are also encroaching into our remaining forests. Idle and marginal lands allowed under the Biofuels Law to be planted to biofuels include mountain slopes and deforested areas. This could encourage planting biofuels instead of doing serious reforestation projects. In 2008, between 15,000 ha and 50,000 ha of deforested and idle lands in Negros were eyed by the Biofuels Research and Development Center for a jatropha plantation.

Widespread poverty and landlessness also cause deforestation.  Poverty drives people upland so they can eke out a living. In a country where more than half of the population is poor, forests are rich sources of food and other resources, which are very attractive to those desperate for survival.

Prompted by flash floods and landslides in the southern Philippines in January, President Aquino issued Executive Order No. 23 (Declaring a Moratorium on the Cutting and Harvesting of Timber in the National and Residual Forests and Creating the Anti-Illegal Logging Task Force) to impose a total log ban throughout the country. No new logging permits will be issued and cutting of trees will no longer be allowed in natural and residual forests. EO 23 also mandates the creation of a national task force against illegal logging that will have regional counterparts. This move was both welcomed and criticized by environmentalists.

Though EO 23 bans logging in natural and residual forests, and prevents the DENR from issuing more logging permits, cutting of trees to make way for plantations is not prohibited under Section 2.2. This is ironic and at the same time alarming because, under this provision, we could lose our real forests in exchange for monoculture plantations. Months after its implementation, large commercial logging still operates in the provinces of Quezon, Isabela, Cagayan and certain regions on Mindanao island.

Mr. Aquino also issued Executive Order No. 26 to implement the National Greening Program, which aims to plant 1.5 billion trees in 1.5 million ha by 2016.

Ancestral lands are included for reforestation under EO 26. This rings alarm bells for indigenous peoples because many of them have been driven away from their ancestral lands to make way for tree plantations. This was experienced by the lumads of Davao del Norte in the 1990s when the 45,000 ha Ifma awarded to Alcantara and Sons Inc. covered almost all of their ancestral lands in Talaingod.

With the dwindling forests, coupled with the threats of more disasters brought by climate change, it is high time for a log ban and a massive reforestation effort. However, the threats should be addressed so that the opportunities can be maximized.

Halting deforestation is more than planting trees. For as long as commercial logging continues, conflicting economic and environmental policies such as the Mining Act of 1995 and Biofuels Law remain, widespread poverty and landlessness, and corruption in government persist, laws and projects that are meant to stop deforestation are bound to fail. Worse, we will continue to lose our forests. The future of our nation and the next generations is at stake.

(Marjorie Pamintuan,  a graduate of Communication Research from UP Diliman, is the spokesperson of Kalikasan People’s Network for the Environment and convenor of Task Force Justice for Environmental Defenders. Kalikasan PNE is a national grassroots-based environmental network campaigning for the protection of forests and biodiversity.)

Roque may speak on int’l law, but Locsin says it isn’t foreign policy