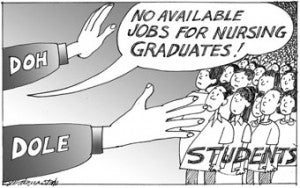 Against conventional political wisdom, former Tarlac Gov. Margarita “Tingting” Cojuangco has indicated that she would run for vice governor of the Autonomous Region in Muslim Mindanao (ARMM). Neither a Muslim nor a Mindanao denizen (although she has taken care of the legal requirements of residency as expected), she’s an outsider who has the gumption to take on the ARMM big political bosses and declare her candidacy. Hers is an audacity that defies standard or square calculations—and she is willing to risk it all apparently because she happens to be the aunt of President Aquino.

But Cojuangco has preceded her bold move to declare her candidacy by other politically risky moves such as resigning from the presidency of the National Defense College, the defense establishment’s educational institute for security and strategic issues. A holdover from the previous administration, she resigned allegedly in protest of the President’s moves to postpone the ARMM election. By declaring that she is running in the election, she defies her nephew and forces him to reconsider. She has portrayed herself as champion of the ARMM and therefore worthy of its second-highest post.

In hindsight, her moves are typical of the shadow play of Philippine politics that operates more by seemingly irrational tendencies rather than straight political calculations. She and her husband, former Tarlac Rep. Jose “Peping” Cojuangco Jr., are political survivors and master shadow-players. As members of the majority coalition in the previous administration, they were powerful enough to have won the respect of President Gloria Macapagal-Arroyo so that the husband was named presidential political adviser while the wife became NDC president. They remained largely in the good graces of the administration even after former President Corazon Aquino called on Arroyo to step down in the wake of the “Hello, Garci” scandal. The contortionism of Philippine politics was further revealed from thereon: while one wing of the Cojuangco clan was laying siege to the Arroyo presidency, another chose to sleep with the enemy.

Now, Tingting Cojuangco is seemingly taking on the enemy of the enemy she had slept with. But her new foe is a spurious antagonist since the President happens to be her husband’s nephew, and since Peping was the favorite brother of Cory, wife and husband have an emotional, sentimental pull on him. In short, while looking and acting like an outsider in the Aquino administration, Tingting is really an insider. And she has been playing the political insider’s game all along, even when the Cojuangcos were out of power.

But Tingting is not an outsider to ARMM politics. She is a curious example of a recent invention: the “Mindanaophile,” or the Mindanao cognoscente, someone who relishes and prides herself in being an expert on things Mindanaoan. Armed with a PhD in history from the University of Santo Tomas, she has been studying different aspects of Mindanao culture since the 1980s and publishing academic and popular papers on the subject. During the Cory Aquino era, her influence was instrumental in making Zacaria Candao the administration candidate for first ARMM governor and his winning handily.

Candao’s election and the subsequent election of the next ARMM governors indicate that whoever is the Malacañang candidate wins. Tingting is not yet seeking the blessings of Malacañang for her candidacy because she has to make sure that there will be elections in the first place. By styling herself as a maverick, she projects herself as an outsider. But of course in the end, blood is thicker than water, and Mr. Aquino may be forced to assume more and more the wisdom of his aunt.

What we are witnessing is the prevalence of dynastic politics that has historically consumed the Philippines and turned it into the playing field of political clans and bosses. It’s not exactly Mr. Aquino’s fault that some of the more embarrassing issues that have plagued his young presidency have something to do with his clan: the Hacienda Luisita question; Antonio Cojuangco Jr. asking a bishop not to link the administration to illegal gambling; and Danding Cojuangco winning the coco-levy battle in the Supreme Court. Or is it? No matter: the flexing of muscle by the Cojuangco clan and the return of Kamag-anak Inc. may risk further eroding of public support for a presidency that is already showing signs of breaking at the seams.

Read Next
Visions and revisions
EDITORS' PICK
Been there, done that but what’s the difference between MECQ and GCQ?
BREAKING: 3,226 latest COVID-19 cases bring PH’s total to 106,330
PNP: Checkpoints back in MECQ areas
Smart 5G goes live
Water remains our saving grace right now
A gem of a residence in the new normal
MOST READ
MECQ guidelines in infographics
You’re my ‘idol’ in crafting laws, neophyte senator ‘Bato’ tells Drilon
Citing Duterte order, Lorenzana says PH won’t join other navies in South China Sea drills
Ces Drilon after the ABS-CBN shutdown
Don't miss out on the latest news and information.