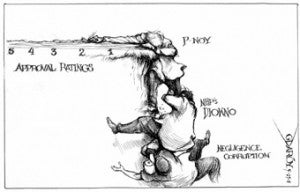 Presidential Spokesman  Edwin Lacierda says Malacañang is leaving it to public officials to have the “discretion to know what is best for the country (and) what is best for the President.” In the case of Bureau of Corrections director Ernesto Diokno, who has come under fire following the arrest of former Batangas Gov. Antonio Leviste for leaving without permission the New Bilibid Prison where he is serving sentence for the killing of a business associate, Lacierda said he should “consider the public interest” in deciding how to respond to mounting calls for his resignation.

But Malacañang may have to wait a long time before Diokno discovers where his own private interest ends and where the public interest begins. Right now he seems to believe that the two intersect in his keeping the post. Subtle reminders and broad hints that his departure from office would best serve the public interest have gone unheeded by him. Not even a public rebuke from President Aquino, who had plucked him from retirement and appointed him to his present position, would make him leave. All because he professes innocence in the scandal that exposed the special privileges Leviste enjoyed, like “living out” and “sleeping out” of jail, highlighted by his decision to slip out of the prison compound purportedly to seek relief from a painful tooth with his dentist.

Don’t look at me, blame those who serve under me, Diokno has been saying from the day the Leviste visit to his Makati home and office became public. On Wednesday he told the Department of Justice panel investigating the incident that he had heard reports about special privileges granted to some moneyed and influential prisoners and had issued a memorandum directing strict enforcement of prison regulations. But he said he did not monitor if his instructions were followed. “I am not obliged to guard them (prisoners), I am just concerned with policymaking,” he explained.

Senior state prosecutor Susan Dacanay, however, told Diokno that the responsibilities and functions of the BuCor director do not end with crafting policies. She reminded him that the law vests the BuCor director with the responsibility for “the execution of penal policies, plans and programs.” She said: “You are supposed to execute and administer laws … and enforce the rules governing the operations and management of prisons.”

It is either that Diokno is ignorant of what his job entails or he is pleading ignorance to extricate himself from a big jam. But whether one or the other, the fact remains that he has failed in his job and he has failed the President, who is reputedly a friend of his. He has become another embarrassment to an administration that has been successively embarrassed by the mistakes of officials known to be close to Mr. Aquino: Local Government Undersecretary Rico Puno, who was partly blamed for the deadly hostage-taking at the Luneta, and Land Transportation Office chief Virginia Torres, who was enmeshed in a legal dispute over the contract to supply driver’s licenses.

In each of these cases, the President failed to act with the firmness, decisiveness and dispatch expected of him by the public but instead hemmed and hawed and invoked the erring official’s right to due process until the controversy blew over. And in every case, his friends never thought of sparing the President the embarrassment of being blamed somehow for appointing someone who proved unequal to the challenge of the job. It seems that Mr. Aquino has had the bad fortune to be close to people who think friendship is a one-way street.

When Cabinet members get into trouble, they routinely seek sanctuary in the axiom that they serve at the pleasure of the President. Diokno, who occupies a lower position, apparently thinks that even the President’s express displeasure with his performance can simply be ignored.

Mr. Aquino said over the weekend that he was “not happy” with Diokno’s explanations. In appointing officials, he pointed out, trust and confidence are required, and once these are lost, “there is a corresponding action.” Since Diokno cannot take the hint, Mr. Aquino should just tell him straight that he wants him out. Or is he incapable of displeasing friends who have displeased him?

WHO reminds Pinoys: No rapid drop yet in virus cases; stay home

Duterte: No vaccine, no school opening