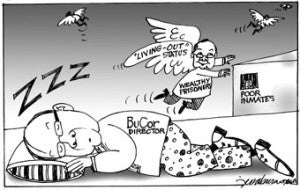 A PASTORAL letter from Archbishop Socrates Villegas of Lingayen-Dagupan strikes a note not often heard in the controversy over the reproductive health bill pending in Congress: moderation. “We want to make a plea for greater charity even as we passionately state our positions on this divisive issue. At the end of the heated debates, we will all be winners if we proclaim the truths we believe in with utmost charity, courtesy and respect for one another.”

The pastoral statement will only be read in all churches in the archdiocese of Lingayen-Dagupan this Sunday, but already it is making the rounds, passed from hand to hand or e-mail account to e-mail account. It is not hard to see why; the letter is a welcome call for the “triumph of reason and sobriety.” In the same spirit of charity and candor, however, we must point out an unsettling truth: the archbishop’s statement is better directed at some of his fellow bishops and priests who have led the fire-and-brimstone opposition to the RH bill.

Even before the present Congress convened, some leaders of the Roman Catholic Church in the heat of the election campaign last year already issued threats to excommunicate those political candidates who supported a reproductive health agenda. That hostile stance, lacking in the very “charity, courtesy and respect” Archbishop Villegas now speaks of, set the tone for much of the Church’s engagement with the RH bill issue. Since then, the extremist position was reinforced by threat after high-profile threat: of communion being possibly withheld, of churchgoers known for their pro-RH bill position being told they were unwelcome in church, of RH bill advocates being harassed by chants of “Your mother should have aborted you.” While the true Church teaching on the vexing issue of contraception is well-reasoned and even nuanced (as Pope Benedict XVI’s remarks in “Light of the World” proved), the extremist position adopted by a number of bishops and priests and laymen became absurdly reductionist, equating the concept of reproductive health itself with either abortion or licentiousness.

(There is also the not insignificant matter of Villegas’ predecessor, Archbishop Oscar Cruz, adopting a stance against President Aquino that could only be categorized as personal, including his uncharitable notion, certainly not something that will find support in the Church’s teachings, that a man like the President who is past 50 is effectively disqualified from a happy marriage.)

The lack of charity, courtesy and respect touched bottom when a bishop decided it was time to pull out of the high-level dialogue with Malacañang, because Malacañang, he said, was no longer open to discussion. In fact it is the bishops who can be accused of inflexibility in position.

Thus, when Villegas writes the following—“The past few months have seen many of us who belong to the same Church and who share the same faith in Christ at odds with one another on the issue of the reproductive health bill in Congress. It is indeed sad and perhaps even scandalous for non-Christians to see the Catholic flock divided among themselves and some members of the Catholic lay faithful at odds with their own pastors. If we fail to have love, we make ourselves orphans.”—charity and candor impel us to point out that sometimes the orphaning is done by the pastors themselves.

We do not wish to suggest that the Villegas pastoral letter can be interpreted as being pro-RH bill. The good bishop’s appeal to a return to conscience is based squarely on the serene conviction that the right thing to do is to oppose the bill. “We pray conscience does not allow itself to be swayed by statistics or partisan political positions. The only voice conscience must listen to is the voice of God.” Elsewhere he also writes: “The issue of contraception belongs to the realm of faith not opinions.”

But he exemplifies his own appeal for reasoned debate, and it is a call we should heed. “We appeal to our Catholic brethren who stand on opposing sides on the reproductive health bill to return to the voice of conscience, to state their positions and rebut their opponents always with charity.” Now that is something all Filipino Catholics can agree on.