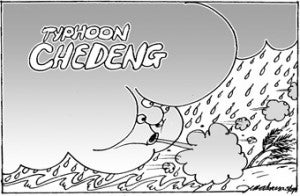 BUREAU OF Corrections Director Ernesto Diokno has given a new meaning to the word “corrections.” Asked about the VIP treatment given to Antonio Leviste, including several grants of “leave” in which the former Batangas governor was allowed to leave the premises of the New Bilibid Prisons, Diokno said he had been aware of the prisoner’s “unauthorized trips” but dismissed it as “just a small matter.” Until now, he has not made any correction or clarification to his remarks, which a lawmaker has called “fatal” and which infuriated his boss, Justice Secretary Leila de Lima. Apparently his awareness of Leviste’s trips outside the NBP does not extend to self-awareness about the implications of his remarks.

As Puerto Princesa Bishop Pedro Arigo said, the special treatment of VIPs and other iniquities have been there for decades. “There’s a culture of impunity where if one is rich, influential and powerful, one can get away from detention, such as what has happened to (Leviste) and former Zamboanga del Norte Rep. Romeo Jalosjos,” he said on Radyo Veritas. Arigo, who chairs the Catholic Bishops’ Conference of the Philippines-Episcopal Commission on Prison Pastoral Care, said corruption in the penal system is “easy to understand” because rich convicts are known to use their money and influence “as early as during their trial.” Once convicted and sentenced, they would parley their social status and financial weight for special treatment in jail, which prison wardens all too readily grant them. Wealthy convicts, for example, are allowed air-conditioning. “I see many such instances because I go to Muntinlupa,” the bishop said. “I won’t make them public, but that’s what is sad in our criminal justice system at present. The reality is, if you’re poor and money-less, you don’t have any influence and you’re pitiful. But if you’re rich, influential and have connections, even if you go to jail, you get VIP treatment.”

De Lima said the special treatment of rich and influential prisoners has been an “open secret.” Coming from a member of the bar and a justice professional who has been laboring under the criminal justice system for some time, the remark is shocking. What have the different pillars of the justice system been doing all along to check and correct our twisted, porous corrections system? De Lima has ordered, for example, a comprehensive review of the Revised Penal Code to make its statutes more attuned to the new century, but the review may take some time. What she should have ordered instead is an immediate review of the penal and prisons management system to stop it from according special treatment to influential prisoners.

To her credit, it was De Lima who ordered the arrest of Leviste near the LPL building in Makati, which he owns. She has also ordered the review of security arrangements inside the NBP compound, including the prison guards’ use of cell phones. She said she had received information that an inmate who ordered the killing of BuCor Assistant Director Rodrigo Mercado gave the order from a cell phone obtained through a prison guard. Apparently, some enterprising guards have been “renting out” their cell phones to prisoners, De Lima said. Although prisoners are prohibited from using cell phones, she said, mobile devices have been recovered during prison raids. There’s also a drug problem inside the NBP, she added.

Leviste’s arrest has opened a can of worms, as did earlier prison scandals involving powerful and wealthy inmates. The task before De Lima and the justice department is to put a stop to the cozy relationship that exists between jailer and jailed, fire prison officials who have fostered it, and reform the penal system. Other needed measures, such as the rehabilitation of our jails so that the justice system would be truly rehabilitative, not putative, would obviously take some time to carry out. But the overhaul should start now.