Where were they? | Inquirer Opinion 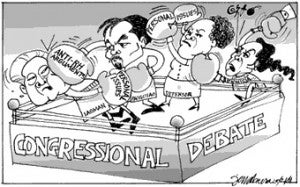 THE STUNNING report that the National Food Authority lost P100 billion in 10 years has drawn justifiable outrage from many sectors. The government agency tasked to ensure the availability and price stability of the country’s main food staple frittered away massive public funds through a vast system of unsound decisions and dubious transactions that, taken together, left stupefied government auditors unable to describe it other than “legalized smuggling.”

Among the many voices that have joined the irate public chorus calling for accountability and punitive action for this irregularity is the National Food Authority Employees’ Association (NFAEA), which, through Courage, the umbrella organization of government employees to which it belongs, denounced the NFA loss as a case of “the people [being] robbed not just twice, but thrice.” It also demanded that “heads should not only roll but the billions of pesos should be justly returned to the people.”

The heads in question are those of former President Gloria Macapagal-Arroyo and her NFA officials, under whose watch the agency over-imported rice, apparently tolerated a cartel of rice traders that hoarded government permits to import the crop, made wildly inaccurate estimates of the country’s food requirements, and mismanaged stocks, leading to the heinous spectacle of rotting grains in the NFA’s warehouses while the country’s destitute scraped and begged for their daily sustenance.

Not surprisingly, corruption, ineptness and inefficiency led to the absurd fact that, in the twilight of the Arroyo administration, the Philippines would become the world’s biggest importer of rice—and yet still be plagued by rice shortages and price fluctuations.

The NFA employees’ union, which has mounted a vigorous campaign to dissuade the government from abolishing the agency following revelations of its insolvency, is well within its right to call for punishment and public redress in this case. But it must also be pointed out: The NFA employees now raising their voices were right deep inside the organization that committed these anomalies. The NFA’s losses were incurred over a period of 10 long years. Members of the union were all over the NFA bureaucracy even as the agency was spiraling into meltdown. So, to use that classic Nixonian question: What did they know, and when did they know it?

Because, let’s face it, a loss of P100 billion over 10 years could not have been accomplished by shady top-level officials alone, unless we grant them superhuman powers of subterfuge and trickery. No, they couldn’t have acted on their own. Papers had to be typed, moved along, greased into the next desk before any abnormal transaction could have ensued. How many colluded, or at the very least averted their eyes?

Those rotting mountains of rice in the bodega—who were tasked to watch over them, and why was no alarm raised for so long? The virtual mini-army of bookkeepers tasked to pore over receipts and invoices—how come they didn’t see that, in 2009 alone, the NFA reported it had lost 7.79 million kilos of rice due allegedly to “short-landing spillage in uploading and transfer of stocks from one warehouse to another”? In short, as sacks of rice were moved around, the grains were tumbling out to the tune of millions of kilos! Incredible. But it had to take an independent government audit group to raise a howl over it. Not a peep from an NFA employee.

Instead, for some baffling reason, the NFA employees’ association, rather than working to expose and rid its own agency of the corruption and waste that have now put its very members’ employment at risk, seems to prefer dabbling in outré conspiracy theories. In a paper it put out opposing the NFA’s abolition, it said the United States was behind the move, that the establishment of the International Rice Research Institute and the development of “miracle rice” were proof of “the imperialist hand at work in trying to manipulate and effect rice trade liberalization in the (sic) developing countries like the Philippines.”

In the private sector, a company that sinks into the red by the billions would be shuttered without a blink. But, in this case, a government agency does likewise due to massive rot from within—and don’t let anyone claim it’s the handiwork of a few bad apples at the top—and the rank-and-file vents its ire at that old bogeyman, US imperialism. Huh? If the NFA union wants to be taken seriously, it should, instead, begin looking at its own responsibility in this mess.