RALLIES protesting the killing of Osama bin Laden by American forces have broken out in Gaza and Pakistan. Since Gaza is dominated by Hamas, a conservative Islamist group classified by the US and the European Union as a terrorist group, the protest rallies there had been expected. But the demonstrations were led by the Salafist, rival of the Hamas, which broke up the rally because of the unity deal it signed recently with Palestinian President Mahmoud Abbas and his more secular Fatah movement. Although the Hamas head in Gaza Ismail Haniyeh has denounced Bin Laden’s killing as an assassination “of an Arab holy warrior,” Hamas has sought to distance itself from the extremism of al-Qaida and Salafist. The latter considers Hamas too moderate. Hamas knows that peace in Palestine depends on a rejection of jihadist violence, not a glorification of it. 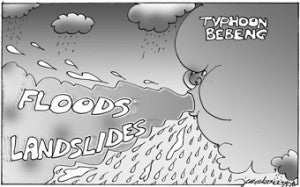 The rallies in Pakistan were expected. The raid against Bin Laden in a suburb of the capital Islamabad was carried out by the US without Pakistani leaders being given prior notice. Although it’s unfair to accuse Islamabad of harboring the al-Qaida leader, it is well known that he had popular support among Muslims there, which made it difficult for Pakistani authorities to capture him. The support was reaffirmed by the rallies protesting his killing.

But the fact that majority of Muslims stayed away from the rallies should indicate that from 2001 when the Twin Towers fell and 2011 when Bin Laden was killed, there has occurred a sea-change in the mainstream Muslim world that the extremism of the sort that al-Qaida espouses is anathema to Islam. As a result of the terrorist attacks that have been carried out in the United States and other non-Islamic countries, the Islamic world, by and large, has come to believe that al-Qaida, Jemaah Islamiyah and other jihadist groups have been misrepresenting the tenets of Islam.

Pope Benedict XVI has warmly welcomed this invitation. He has also outlined two points that Islam needs to clarify: “the questions concerning its relation to violence and its relation to reason.” The first question he had dealt with some controversy, especially when he delivered his by now famous Regensburg address in 2006, in which he quoted the late medieval Byzantine emperor Manuel II Paleologus addressing a Persian Muslim interlocutor “with a startling brusqueness, a brusqueness that we find unacceptable,” the Pope took care to point out, regarding Mohammed’s command “to spread by the sword the faith he preached.” To the Byzantine leader, violence cannot be ascribed to the monotheism of Christianity and Islam. “Violence is incompatible with the nature of God and the nature of the soul,” the Pope said.

The second question is related to the first. As Benedict put it, “The decisive statement in this argument against violent conversion is this: not to act in accordance with reason is contrary to God’s nature.” But as scholars of Muslim history have pointed out, intellectualism has never really been accepted by Islam. The introduction of Greek thought into the Islamic world has been seen as a greater threat to the religion than the crusades or the Mongol invasions. Strictly speaking, there’s no Muslim theologian; the counterpart to the Christian theologian is the Islamic legal scholar. The Muslims’ supreme duty has been less to know the truth than to do what is right.

It is a cause of concern and dismay that despite the thousands who have been killed by Bin Laden and others like him who invoke Islam to justify their violence, many Muslims still rally to mourn his death and manifest their approval of Islamic extremism and its campaign of carnage and destruction. But it is also a cause of quiet optimism and comfort that it did not draw as much support as rallies of a similar nature would have before. This shows that the Muslim mainstream is distancing itself from the more fanatical movements that portray Islam, wittingly or unwittingly, as a religion of hate and destruction. The task now is to encourage the mainstream to build up into a critical mass that would challenge the hegemony of Islamic extremism. This can be done by encouraging Islam to dialogue with Christianity, other religions and contemporary society.