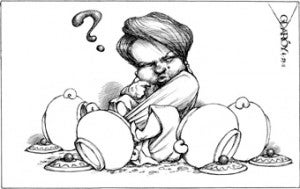 IT MUST have been on the minds of many even before TV news anchor Jessica Soho said it on her new program, “State of the Nation,” because when she did say it, and the story about it circulated, the news came to many harassed consumers with the shock of familiarity.

In the Philippines, she said, citing records of the last six years, oil prices go up during the Holy Week. She then asked whether this regular phenomenon, which happens to coincide with that time of the year when many Filipinos take to the road, was due to “natural forces, economic forces or plain and simple pananamantala [abuse].”

We think the question—let’s call it the “Oily Week” scenario—deserves a closer look, and a more robust, more logically rigorous response from the Department of Energy. Let’s begin with the record (culled mainly from the DOE’s own files).

Last week, on Holy Wednesday (April 20), the oil companies increased gasoline prices by 60 centavos and diesel by 25 centavos per liter. As the Department of Energy duly noted, in its regular oil monitor, the average Dubai crude price had increased by $1.20 per barrel week-on-week. This, plus “the lingering worries about the Libyan conflict remained weighing on the market as prices again lifted by the end of the week. On the average, Dubai crude and gasoline increased by more than one dollar; diesel also lifted by about half a dollar compared to previous week.” Given this scenario, oil companies in the Philippines had no choice but to raise their prices too. (Let us set aside, for now, the question whether the increase in prices here was commensurate with the rise in the Dubai price.)

After Holy Week, however, the oil companies initiated a rollback.

Did the same thing happen last year? The record for 2010 does not seem to bear out the “Oily Week” scenario. On Holy Tuesday 2010 (March 30), oil companies decreased both gasoline and diesel prices by 25 centavos per liter. (They also implemented a similar 25-centavo decrease the week before.) After Holy Week last year, however, the oil firms raised prices again, by 50 centavos per liter (effectively wiping out the consumer’s gains of the preceding two weeks).

Is there nothing, then, to the “Oily Week” scenario? A look at the record for 2009 suggests the matter isn’t cut-and-dried.

In other words, the same pattern Soho alleged, of a spike in prices before hundreds of thousands of motorists head out to the provinces, and a rollback the week after, seems to be present.

The year 2008 is what may be called an outlier, because that was the time oil prices rose steadily from March to August and reached their record highs. The record for 2007 seems to support only half of the scenario: Prices of both gasoline and diesel were increased by 50 centavos per liter the week before Holy Week, and then were increased again, by another 50 centavos, the week after.

What do these figures reveal? That the traditional means of justifying price increases (exemplified in the DOE’s weekly oil monitor reports) does not explain enough.

Prices go up or down because of outside influences: the international market, or political tensions in the Middle East, or a civil war in North Africa. Nothing is said about local market conditions. But is it really possible to imagine a business environment where a massive spike in oil consumption does not figure in business calculations?

A little more candor, from both the oil companies who raised their prices before Holy Week four years in the last five, and from the DOE, is called for.

The fight of the decade: The Gypsy King vs The Bronze Bomber

Honda to shut down Laguna plant