DESPITE THE rescue of at least 13 victims (15 in other reports) of the landslide in Compostela Valley, the overall news is grim. At least five bodies have been recovered, and some 17 small-scale miners or their relatives are still believed to be missing, after a landslide bore down on Barangay Kingking, in the province famous (or notorious) for its so-called gold rush, in the early hours of Good Friday. 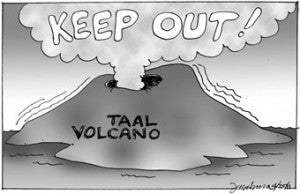 The accounts of survivors reached by the Philippine Daily Inquirer give us a chilling glimpse of the nightmare the victims went through. Twenty-nine-year-old Rico Clase, a miner, was wakened by a “loud sound,” only to find himself already swept out of his hut, on top of the mudflow that surged through it. To keep himself from being swallowed by the mud, he “swam” as fast as he could, moving his arms and legs frantically.

Another survivor, Zeffrey Tundag, was only 15—but he was in the area to begin work that very same day as a first-time miner. “The next thing I knew I was already half-covered with mud and rocks and our bunkhouse was swept several meters downhill,” he told the Inquirer in his own language.

By all accounts, the rescue operations, conducted by soldiers belonging to the 71st Infantry Battalion, local police, civilian workers and the Philippine Red Cross, began as soon as could be reasonably expected, but these were hampered by the same rains that had soaked the slopes and loosened the soil, and also by the lack of landmarks, which were buried in the mud. A military spokesman said some 500 to 800 cubic meters of mud now covered Panganason. “Seven of eight small-scale mining portals were covered as a result of the landslide.”

On Sunday, Pantukan town mayor Celso Sarenas told a news conference that the odds of finding any more survivors were low. “Based on our assessment, it would be difficult to find any more survivors on the third day of operations.” He then vowed: “We will recover all the bodies.”

Tragically, Pantukan has been through this before. When the news first spread, Sarenas reminded reporters that another landslide, in Kingking and an adjoining barangay, had claimed 26 lives only two years ago. “Now, here we are again,” he said.

Yes. Here we are again. The grand pageant of history, or so we are told, repeats itself, first as tragedy and then as farce. The cycle of calamity in the lives of ordinary people, however, repeats itself indefinitely, happens again and again—but always as tragedy.

The background of the two survivors whom Inquirer correspondents Frinston Lim, Dennis Santos and Rosa May de Guzman-Maitem tracked down and interviewed suggests several reasons why.

Clase, for instance, was a repeat landslide survivor; in the language of the news report, he was a “veteran” of two previous landslides. And yet there he was again, in the danger zone; shouldn’t the soaking rains have alerted him to the possibility of another landslide? According to Mayor Sarenas, the municipal government had always warned the small-scale miners and their families about the danger of landslides, especially during rainy days. Whether that piece of information is completely accurate or not, “veterans” like Clase had previous experience to base their decisions on.

And Clase, to be scrupulously fair, did decide to continue as a small-scale miner even after almost losing his life in two landslides. “What I have been thinking is that danger is everywhere. If it’s your time, you’re not safe even in areas you think are safe,” he said after surviving his third. Besides, there is always the lure of the gold, which is “now priced at P2,000 a gram.”

Tundag’s own biography provides another reason: The second survivor is only 15, but was already ready to do a grown man’s job.

Their circumstances suggest yet another reason: The government, both local and national, has failed to do an adequate job of securing the area, implementing real safeguards and regulating mining. The fact alone that almost everyone still refers to this part of the Valley as a “gold rush” area, two decades after the first discovery of gold, indicate that not enough members of the national and provincial elite want to change the status quo. “Gold rush,” after all, connotes lawlessness, the thrill but also the anarchy of every man for himself.\