Stung by the latest survey results indicating that more Filipinos were experiencing hunger, President Benigno Aquino III expressed reservations about their accuracy. The survey, conducted by Social Weather Stations from March 4 to 7, found one out of every five respondents—or 20.5 percent—claiming to have gone hungry at least once over the previous three months. That translates to about 4.1 million hungry families—700,000 more than the number who made a similar claim in November last year. The same poll also showed that 51 percent considered themselves poor, higher than the 49 percent who placed themselves in the same category three months earlier. 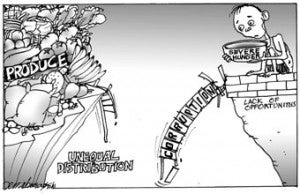 Confronted with these results, the President was unconvinced. How could that be, he asked, when the labor department was reporting more people finding employment and private business was saying it was hiring more workers? Besides, he added, the statistical sample used in the survey didn’t “capture” those who were benefiting from the Conditional Cash Transfer (CCT) program of the government. Mr. Aquino pointed out that the CCT targeted the 400,000 poorest families in less developed areas of the Visayas and Mindanao which, together with Metro Manila, saw declines in the incidence of self-rated hunger. On the other hand, the proportion of hungry people reached a record high of 25 percent in Luzon (outside of Metro Manila), up from 18.3 percent in November.

Had the survey sample been “reversed,” the results would have shown more people finding relief from hunger pangs, he said.

Surely Mr. Aquino knows more than most that any survey to be meaningful and useful cannot be “skewed” one way or another. Unless it can be shown that the survey sampling was unscientific or the methodology employed by SWS was flawed, he has to take the unflattering results at face value and look for the explanations elsewhere.

Inquirer columnist Randy David has offered one plausible reason for the spike in the number of people claiming hunger. He pointed out that the survey was done at a time when the Department of Social Welfare and Development was also conducting interviews to assess the eligibility of families for the CCT. An indigent mother being interviewed by the SWS or by the DSWD “would not be able to tell the difference,” David said, and, aiming to qualify for the cash transfer, “she would be inclined to picture her family’s circumstances in the direst possible way.” Just the news that interviews are being scheduled by the DSWD already creates a “sense of anticipation” that makes it difficult to get “an objective assessment of poverty and self-reported hunger.” Like the smell of cooking causing instant hunger, it may be added.

But it would be a gross mistake for the Aquino administration to consider widespread hunger as largely a matter of perception. The stark reality is that hunger stalks every corner of the country outside the gated communities of the super-rich. And if the survey says most of the very poor are not enjoying the benefits of the CCT and other programs aimed at alleviating hunger, then a review is in order. Maybe these programs are not reaching the right targets. Or it could be that the beneficiaries are too few to make an impact on the overall situation. Or perhaps the amounts being given are too small to provide sustained relief from hunger over a span of time. But it would be folly to shift focus simply to shore up the survey ratings. Fighting poverty and hunger is the principal obligation of government. Looking good should come naturally to an administration that makes significant headway toward eliminating them.