Not the last | Inquirer Opinion

LAST THURSDAY, US Ambassador Harry Thomas turned over a check for $132,000 (about P5.7 million) to Justice Secretary Leila de Lima, representing the proceeds from the forfeiture and sale of a house in California owned by former military comptroller Jacinto Ligot and his wife Erlinda. It was, as almost all news reports about it pointed out, a historic first. 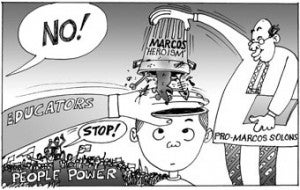 “I am pleased to announce the first ever return of funds in the asset forfeiture case, where the US government is returning $132,000 to the Philippine government,” Thomas said. De Lima’s response clarified the pioneering nature of the turnover, explaining that it was the first such return of illegally obtained funds under the Mutual Legal Assistance Treaty between the Philippines and the United States.

At least three aspects of the turnover deserve closer study.

First, and as in the case of former agriculture undersecretary Jocelyn “Joc-Joc” Bolante, the Philippines has benefited from a decisive action of the US government. While we welcome the US government’s assistance, we are also aware that this signal legal victory throws a spotlight on the overly complicated, not very successful anti-corruption drive in the Philippines.

In other words: The US assistance should prod, or even shame, Philippine institutions into doing better in the future.

Second, Assistant Ombudsman Jose de Jesus was quick to claim credit for his boss, the impeached Ombudsman Merceditas Gutierrez. “We are happy that the efforts of the Ombudsman, under the watch of Ombudsman Gutierrez, in having this check delivered to the Philippine government, have paid off.” But we can guess the reason for their happiness. The check can now serve as a protective umbrella against the fallout from Gutierrez’s inexplicable failure to file any corruption case against Ligot.

Last February, Senator Franklin Drilon proved at a Senate blue ribbon committee hearing that, despite incontrovertible evidence provided by the Anti-Money Laundering Council of Ligot’s immense and presumed-to-be-ill-gotten wealth (because it was grossly disproportionate to his P30,000 monthly income), all the way back in 2008, Gutierrez failed to file any anti-graft case against Ligot. “It was referred to the Office of the Ombudsman three years ago,” Drilon said then, referring to the testimony of an AMLC investigator that she had personally delivered the bank records to Gutierrez in May 2008. “The fact is, as we talk today, there is no graft case pending” against the fortune-blessed ex-comptroller.

In other words: nice try, Mr. De Jesus. But this particular forfeiture case in the US, begun in 2005, does not even begin to justify Gutierrez’s astonishing failure to throw the book at Ligot and company.

Third, the cooperation of the United States, where many of the ill-gotten proceeds of various corrupt officials in the last decade were ultimately invested, seems to us to signal renewed international confidence in the Philippine government’s capacity to wage the war on corruption. In fact, Thomas all but said that the Filipino public should expect more. “We know this is the first of several cases that we will be able to cooperate with the Filipino government.”

As in any war, there comes that MacArthurian turning point where, once an army’s resources have been committed, its generals realize that there is “no substitute for victory.” In the context of the fight against corruption, the first of two principal planks on which President Benigno Aquino III based his entire campaign platform, that point is reached when the public sees that the momentum in the fight is real. Is the recovery of the Ligot property in Buena Park, California, only one of several they own, part of a campaign that includes the filing of tax evasion charges against Representative Juan Miguel “Mikey” Arroyo, the filing of criminal and administrative charges against former congressman Prospero Pichay and four others for the “highly irregular and anomalous” cash infusion by the Local Water Utilities Administration in a Laguna thrift bank, not least the impeachment of Ombudsman Gutierrez? If it is, and if we can expect more such cases or legal milestones in the coming days, then the Aquino administration can rely for solid support on public opinion.

In other words: This is a first, but we certainly hope it isn’t the last.