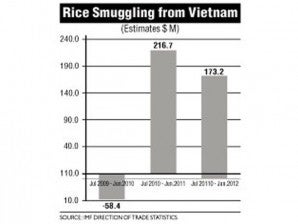 Despite former National Food Authority Administrator Angelito Banayo’s claims of a tuwid na daan policy during his watch, International Monetary Fund trade figures show that rice smuggling in the Aquino administration’s first two years—abetted by the NFA head himself, witnesses recently alleged in the Senate—has exploded to unprecedented levels, estimated at over P16.6 billion worth during this period.

This is shown through an analysis of the IMF’s Direction of Trade Statistics data on trade between Vietnam and the Philippines, 90 percent of which concern rice.

During President Aquino’s first two years in office, the IMF data show Vietnam’s exports to the Philippines totaled $2,453 million. However, our reported imports amounted to much less: only $1,775 million. Reduce the export figure by 10 percent to take account of freight, insurance and other shipping costs to get $2,208 million. The difference—$433 million—between this $2,208 million and the $1,775 million our country reported as its imports from Vietnam is roughly the value of commodities smuggled from that country during this period.

Assuming that 90 percent of our exports from Vietnam are rice, we estimate $390 million worth of the staple were smuggled in Mr. Aquino’s first two years.  The estimate is even conservative as the 10-percent reduction in Vietnam’s export figures may be too high, given the short shipping distance between the two countries. At an average exchange rate of P42.5:$1 in the period, the $390 million in smuggled rice amounts to P16.6 billion. With the 40-percent customs duty uncollected on this amount, rice smuggling has meant P6.6 billion in foregone government revenues.

In contrast, the discrepancy between Vietnam’s export figures and the Philippines’ import figures in the last two years of then President Gloria Macapagal-Arroyo was a negative $58 million, indicating zero smuggling and due merely to reporting errors.

The flood of smuggled rice into the country has actually been politically advantageous to the administration, as the bigger supply pushed down the price of the staple, one of the most important determinants for a regime’s mass support. Indeed farm-gate prices have dropped from P15 in 2010 to P13.5 per kilo, while retail prices have remained steady at P31 per kilo.  This is despite the fact that the global price of rice has steadily risen from $518 per metric ton in 2010 to $620 million by December 2011, to $598 million last month.

The analysis of IMF trade figures bolsters recent public allegations of massive rice smuggling under this administration.  Much of this was through the country’s free ports and, sources claimed, through the now infamous 2,000 container vans that vanished after docking briefly at the Port of Manila. In a recent  hearing of the Senate committee on food and agriculture, leaders of farmers’ cooperatives alleged that Banayo and the late Nixon Kua—known to have been the former NFA chief’s right-hand man—have been involved in rice smuggling schemes because of that agency’s authority to approve rice imports by private entities.

Banayo vehemently denied the allegations, claiming that his accusers were those who lost in NFA bids for rice-import permits. In a letter to the Senate committee, Banayo also claimed: “During our term we drastically reduced the levels of importation of rice from 2.5 million metric tons in 2010 … to 860,000 metric tons in 2011 and 500,000 metric tons this year.”

Obviously, Banayo’s boast of the country’s reduced rice imports referred only to those legally entering it.

After more than two years as NFA chief, Banayo resigned last September to run for representative of the first district of Agusan del Norte against two powerful candidates.