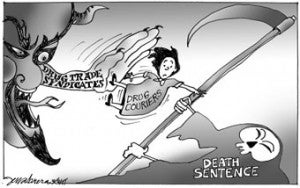 IT BROKE his heart, he said. “I can tell you now,” the former fugitive and current Sen.  Panfilo “Ping” Lacson told reporters a couple of days after he resurfaced. “I cried my eyes out, not for me, but for my staff. Why did they have to be dragged into this?”

The question is plaintive, but it is also potent proof that Lacson has a skewed sense of justice.

Concern for the wellbeing of others, especially dependents like Lacson’s Senate staff, is a natural, human quality. That is not what we find objectionable in Lacson’s statement, or in his elaborate attempt to justify his flight from justice. It is the deficient sense of consequence, the readiness to blame everyone else but one’s self, that we find galling. “Why did they have to be dragged into this?” He was referring to the decision to close down his Senate office and the effort, in the words of the Inquirer news report, to “supposedly cut the salary of his staffers because he could not sign the paperwork.”

But shouldn’t the office of a senator in fact be shut down, his staff told to go home, when the senator goes into hiding? That, it seems clear to us, is merely the direct consequence of the decision to run from the law.

But Lacson does not only assume that his office ought to have continued operating even while his own staff could not locate him; he also fails to recognize his own responsibility for his staff’s sorry situation. “Why did they have to be dragged into this?” The entire burden is placed on the shoulders of others.

Let us assume, for the sake of argument, that in the last months of the Arroyo administration a judiciary vulnerable to pressure resolved to bring Lacson to court for his alleged role in the double murder of publicist Salvador “Bubby” Dacer and his driver Emmanuel Corbito. Lacson fled the country in January last year, a month before the Manila Regional Trial Court issued a warrant for his arrest. Under Gloria Macapagal-Arroyo, his perceived political enemy, Lacson may have thought not only that the odds were stacked against him, but that the legal game itself was rigged. Even assuming all this, however, the objective conditions of Lacson’s legal struggle changed after Benigno Aquino III, the man Lacson supported for the presidency, came to power on June 30. At the very least, the prospect of Malacañang interference in the judicial process no longer existed. Why, then, did Lacson remain in hiding?

Because he wanted special treatment. His own answers during the first news conference he held after coming out of hiding revealed his real expectations inadvertently.

First, he expected the new administration to intervene in the legal case on his behalf. What, after all, is the underlying meaning of his complaint— “It’s said in the papers that I’m an ally but I don’t feel it” —but that he expected to be treated like an ally?  That is, as a fugitive who would no longer be the subject of a wide manhunt, a senator whose flight from justice the law enforcement agencies under new leadership would no longer actively pursue. What did he feel instead? “They didn’t go easy on me, I can tell you that.” He said he never sensed that he “was being given a fair shake by this new administration—and that is what is more painful.” Painful, because he had expected otherwise.

Second, Lacson expected to fight his legal battles without the inconvenience of being detained. Even under a new administration, which in his own view he sees as aggressively anti-corruption, he declined or refused to recognize the option most other Filipinos charged with the non-bailable crime of murder have no choice but to accept: arguing their case from prison. Even after Arroyo had left Malacañang, Lacson continued to fight the case against him in absentia. “I was ready to spend the rest of my life in hiding,” he said.  “I was ready not to see my family again.”

Lacson spoke often of the unfairness that had befallen him, referring to himself more than once as “a fugitive from injustice.” But his definition of justice is as convenient as his definition of his duties as a senator. Now that he is back, he speaks of his senatorial “obligation, not just for myself, but also for our people.” But where was that sense of obligation when his case was still pending in court?

The truth is, for all Lacson’s pronouncements about justice and fair play, he sees himself as requiring special treatment —and thus above the law.