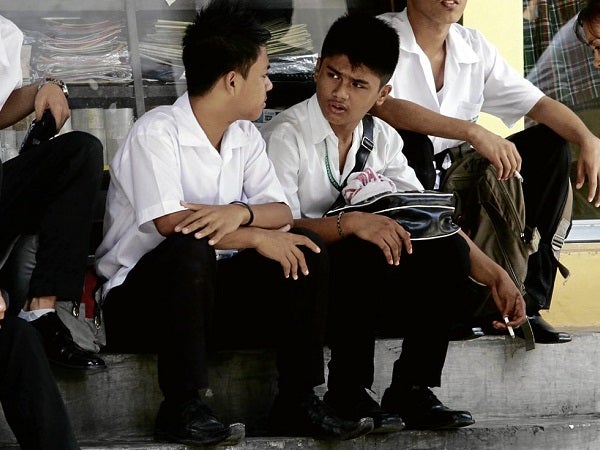 There are no screaming headlines, but the young and the poor, who smoke and drink excessively, are dying every day.

Ten Filipinos die from tobacco use every hour, resulting in 240 deaths every day and 87,600 deaths every year. This is a health crisis.

How did this crisis happen? The main reason is low prices of cigarettes and alcohol. The Philippines has one of the lowest prices of the two products in Southeast Asia.

Because cigarettes are so cheap, the Philippines has one of the highest smoking rates in the Western Pacific. A 2009 survey showed that 28.3 percent of Filipinos were smokers. It is estimated that some 17.3 million Filipinos who are 15 years old engage in smoking.

To discourage Filipinos from smoking, we have to raise taxes. Raise the prices of cigarettes and alcohol, and fewer people will buy them.

You cannot argue with the math. Raise the prices of tobacco by 70 percent and you prevent a quarter of all smoking-related deaths worldwide.

Both rich and poor smoke, but it is the poor who get sick more often. That’s because the poorest sector spends more for tobacco, than for education, clothing or health.

The Constitution is neutral on the use of cigarettes and alcohol.  If a Filipino citizen wants to smoke and if big companies want to make big profits from the so-called “sins” of smoking and drinking alcohol, they are free to do so.

But unlike ordinary citizens, Filipinos who are members of Congress are not free to ignore the present disastrous chain of circumstances.

Cigarette smoke contains some 70 chemicals which cause cancer.  Deaths from stroke and heart attack are most commonly associated with smoking as a risk factor.

In its wisdom, the Constitution proclaims health as a fundamental right, and accordingly imposes on the state the duty to protect the people’s right to health and to instill health consciousness.

In addition, the Philippines is bound by a treaty called the Framework Convention on Tobacco Control, sponsored by the World Health Organization (WHO). I sponsored the Senate ratification of this treaty way back in 2005.

Therefore, it is clear that under the Constitution, Congress has a duty to raise taxes on cigarettes and alcohol. But as sure as the sun rises in the east, the tobacco and alcohol companies will push only for a token increase.

This is how the lobby works. Under the 2004 sin tax law, excise tax rates on tobacco and alcohol products were slightly increased on a staggered basis every two years beginning 2005 until 2011.

Remember that “excise” means to remove. Excise taxes are meant to eventually remove the use of cigarettes and alcohol because they kill consumers.

But our excise taxes failed to accomplish the goal of removing these “sins” from society. Congress did something wrong. It based excise taxes on the net retail price (NRP) of cigarettes per pack and of alcohol by liter. The Oct. 1, 1996 NRP are the pegs which determine the price classification of brands.

Hence, the effect is to impose a “price classification freeze” that fixes the tax rate based on the brands’ NRP as of Oct. 1  1996, regardless of what has happened to the NRP since then.

In other words, regardless of an increase in the NRP of a brand since 1996, its excise tax would still be based on its NRP that year.

Moreover, this uneven classification strongly favors brands that have been operating in the country since 1996 and creates a significant entry barrier because new brands are taxed according to their NRP at the time of their entry. For the cigarette and alcohol companies, it was like they died and went to corporate heaven.

Thus, we shall discourage smoking.

The WHO recommends that the excise tax burden be 70 percent of the retail price of the product if we are to discourage the youth from smoking. By 2015, when the law imposes a tax of P30 per pack, the Philippines’ excise tax burden will increase to 60 percent.

There are two ways to tax the sins of smoking and alcohol. The first is the specific tax, meaning the tax is based on how many units of the product are being sold. The second is the ad valorem tax, which is a percentage of the price.

I chose the specific tax. Just count how many cigarettes or how many liters of alcohol are manufactured and impose the same tax regardless of classification, whether cheap or expensive.

After all, the death-causing effect of tobacco remains the same, whether a person smokes a cheap or an expensive cigarette.  The specific tax is simple.  You can compute revenue collection much more easily.

I denounce the ad valorem tax. This is a notorious road to corruption. Taxes are based on ex-factory prices. You can game this system. Out of the factory, set an artificially low price.  Then sell the product to your own chosen distributors, who are free to raise the prices to excessive limits when in turn, they sell to wholesalers or retailers.

When I chose the specific tax over the ad valorem tax, I was observing the so-called unitary tax system. I am challenging the so-called multi-tiered tax system, which has only bred corruption according to our national experience.

I am against the multi-tiered system, because it encourages downshifting, meaning that a consumer who used to buy expensive cigarettes will shift to cheaper cigarettes. But in the end, cigarettes will kill him, whether the cigarettes he smokes are cheap or expensive.

Every year, the annual gross revenue from cigarette sales amounts to P103.8 billion. Compare this with the cost of treating smoking-related diseases (such as lung cancer, heart attack and stroke), which amounts to P188.8 billion.

Thus, in round figures, government earns P100 billion from sin taxes, but spends double that amount—P200 billion—to treat those who are suffering for their “sins.”

Under my bill, 85 percent of the P60 billion in additional revenue in the first year will be used  to provide all Filipinos universal health care, meaning coverage under the National Health Insurance Program or PhilHealth, and to improve the quality of health care facilities and hospitals.

The remaining 15 percent will be used to help farmers shift to alternative farming, such as raising garlic, onions, tomatoes, peppers, ampalaya and peanuts. Those tobacco farmers are not exactly flourishing under the present system.

Based on the figures provided by the cigarette industry itself, Prof. Solita Monsod of the UP School of Economics computed that a farmer’s annual income from tobacco farming amounts to only P3,269 per hectare.

One final word. That higher taxes will lead to smuggling of cigarettes and alcohol is a bugaboo worthy of the lowest circles of hell. Experience shows there is no significant relationship between price and smuggling.

Let us stop paying pious lip service to compassion and good governance. The best way to protect our young and our poor is to discourage them from using cigarettes and alcohol.

Pass the Santiago bill now and get the following reforms:

Impose one tax for all brands (unitary tax system)

Increase the tax, up to P30 per pack of cigarettes

Use the increased taxes to promote health for the young and poor, and to provide alternative livelihood for tobacco farmers.

(Author’s Note:  This is not an original work, but is based on references too many to mention, which can be provided on request.)

in first year of implementation

Source: Dans and Latuja (2012), The Sin Tax Bill: Government Revenues vs Lives Saved, as presented before the Senate Committee on Ways and Means