Who are the Moro people? | Inquirer Opinion
Close
menu
search

Who are the Moro people? 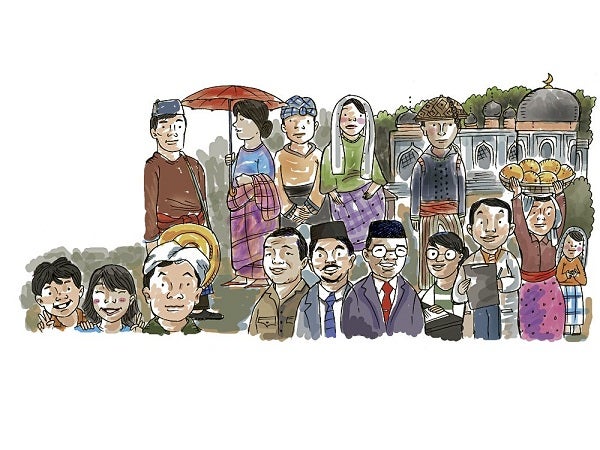 The Moro people comprise the 13 Islamized ethnolinguistic groups of Mindanao, Sulu and Palawan. Along with the group known as Lumad in Mindanao, the Moros are an indigenous population that had been living on the islands long before the coming of Spanish colonialism.

Today, the Moro people are found all over the Philippines. However, they are dominant in the provinces of Maguindanao, Lanao del Sur, Basilan, Sulu and Tawi-Tawi. They are also numerous in some municipalities of North Cotabato, Lanao del Norte, Davao del Sur, South Cotabato, Zamboanga del Sur, Zamboanga Sibugay and Palawan. Ethnically and geographically, the Moro people are distributed as follows:  See table.

Racially and culturally, the Moro people share a common origin with the majority of Filipinos. Linguistically, they belong to the Malayo-Polynesian group of languages.

Origin of the word

Etymologically, the word Moro was derived from the term “Moor,” itself originating from “Mauru,” a Latin word that referred to the inhabitants of the ancient Roman province of Mauritania in northwest Africa, which today comprises the modern states of Algeria, Mauritania and the Kingdom of Morocco.

With the rise of Islam, Mauritania became a Muslim province under the Umayyad Caliphate. Before long, Muslim armies conquered and then ruled much of the Iberian Peninsula from 711 to 1492, a total of 781 years.

For the Spaniards the term Moor did not necessarily have derogatory connotation. It was simply the Spanish name for anyone who was Muslim.  In colonial Philippines, the Spanish rulers used the word “Moro” to refer to all inhabitants of Mindanao, Sulu and Palawan, believing that they all belonged to the Islamic faith.

Spanish efforts to subjugate the Moro homeland resulted in the Spanish-Moro wars that began in 1565 and lasted for over 300 years. To gain the sympathy and support of Christianized native Filipinos, the Spaniards infused the term “Moro” with derogatory connotations, such as “pirates,” “traitors,” “juramentado,” “enslavers,” “cruel” and “uncivilized.”

Thus, until the emergence of the Moro National Liberation Front (MNLF) in 1969, the people in Moroland refused to be called Moros. The MNLF, however, transformed the term into a byword of nationality and identity in Moroland.

Historians date the arrival of Islam on the islands to the latter part of the 13th century. Tuan Masha’ika set foot on the Sulu archipelago in 1280, where he got married and established the first Muslim community.

Tuan Masha’ika was later followed by Karim-ul-Makhdum, a religious missionary, around the middle of the 14th century. However, it was the coming of Rajah Baginda in the early 15th century that the political aspect of Islam was introduced in Sulu. In fact, it was his son-in-law, Abu Bakar, who established the Sulu Sultanate whose capital was Sulu.

Islam would be introduced to the rest of Mindanao with the coming of Sharif Awliya. Both oral and genealogical evidence reveal that he arrived on mainland Mindanao at around 1460. However, it was Sharif Kabungsuan who was responsible for the establishment of the first Islamic community, especially in the Cotabato region.

In fact, all those who claim to be heirs of the Sultanate of Maguindanao would always have a tarsila/salsilah (genealogy) showing that they are descendants of Sharif Kabungsuan.

Some authors claim that the Maranaos were Islamized via the Maguindanaons and Iranuns of the Illana Bay area. However, some oral traditions of the Maranaos also tell us that a certain Sharif Alawi was responsible for the spread of Islam to Lanao and Bukidnon via the northern coast of Mindanao.

One command, one God

Eventually, it is the Islamic faith that would distinguish the Moros from the other natives of the Philippine archipelago. Under the sultanates, the Moros were unified under one leadership, one command and one God. Islam served not only as a unifying thread for their political organization but also as the ideological foundation to effectively resist foreign intrusions.

The non-Islamic populations, on the other hand, were scattered in barangays that were independent from each other, thus offering only sporadic and disunited resistance against the Spanish invaders. Because of this, they would be easily conquered by the Spanish colonizers.

The struggle started in 1565, when the Spanish colonial aggressors began to penetrate Moroland and made their presence felt. After Christianizing and colonizing the natives of the northern part of the Philippines, the Spaniards proceeded to the Moro homeland to suppress Islam and neutralize the economic and political activities of the Moro sultanates.

The Spanish rulers effectively utilized the classical “divide and rule” strategy and made use of the Christianized natives (called Indios) in their military expeditions against the Moro people. The latter, on the strength of their centralized sultanates, the Maranao Pengampong, their Islamic tenets and advanced economies, fought the Spaniards defensively and offensively for 330 years.

Some historians consider the Spanish-Moro War as one of the longest anticolonial war in the world. It also resulted in deeply rooted feelings of resentment and ill will between the “Filipinos” and the Moro people.

The success of Spanish colonization in the North also heightened the degree of estrangement and animosity that divided the Moro people and the majority Filipinos.

While the Moros could be deemed to have emerged victorious in the sense that they succeeded in preserving their freedom, faith and homeland, they were, however, severely battered. The final blow was to be delivered by US imperialism.

The Moro people’s efforts at reconstruction and recovery from the ravages of Spanish aggression were interrupted with the coming of American colonizers in 1898.

Compared with their Spanish predecessors, the Americans were more determined and more advanced—politically, technologically, economically and militarily.

Faced with this display of superior might and fresh vitality, the weary, flagging and worn out resistance of the Moro people gave way, but only after a decade of bloody fighting and heroic struggles.

The US colonial government systematized and regulated the whole process of land ownership, land registration, cadastral survey, homesteading and agricultural investments. Through class legislation and discriminatory processes, the ancestral lands and economic resources of the Moros and Lumad would gradually drift into the hands of Christian Filipino settlers and large US corporations.

More importantly, the Moros (and Lumad) would also lose their right to govern themselves according to their own systems as their territories were systematically incorporated into the bureaucracy of the Philippine colony.

Their once sovereign states in the form of the sultanates were reduced into mere provinces of the colonial government and later incorporated into the Philippine Republic.

It must be noted that during American imperial rule, various Moro leaders voiced out their desire for their homeland to be granted independence.

In 1934 and 1935 for instance, in the midst of Filipino-American negotiations for independence, Maranao leaders sent various petitions to Filipino and American authorities for a separate independence grant. As expected, these petitions were ignored.

The granting of Philippine “independence” in 1946 did not improve the situation of the Moros. Rather, it worsened their economic, political and social conditions. The US imperialists, while relinquishing formal political rule to Christian Filipino (and some Moro elite) protégés, ensured that they remain the wielders of economic power.

Thus, the neocolonial government continued to protect and strengthen foreign economic interests. For instance, multinational corporations retained control and monopoly of the Bangsamoro economy particularly in the agri-export industries of pineapple, banana and rubber.

In addition, in the 1950s and 1960s, the Philippine government promoted and intensified the migration program to Mindanao. This policy was encouraged in order to quell agrarian unrest in Luzon and the Visayas. During the Magsaysay administration, several resettlement programs like Narra, Lasedeco and Edcor gave way to massive migration from the northern and central parts of the Philippines to Moroland.

The Moro people’s resentment over the loss of their sovereignty, ancestral lands and economic resources was expressed occasionally from 1914 to 1940 in minor moves. However, these would be transformed into major moves and systematic opposition beginning in the 1960s.

For instance, Rep. Ombra Amilbangsa in 1961 filed a bill in the House of Representatives seeking the political independence of Sulu. After the 1968 Jabidah massacre, Datu Udtog Matalam, former governor of the undivided Cotabato province, would organize the Muslim Independence Movement.

Still in response to the Jabidah massacre, Nur Misuari in 1969 would also organize the MNLF and started popularizing the term “Bangsamoro” as an identity distinct from “Filipino.”

By 1972, the MNLF would gain national and international prominence with a series of well-coordinated attacks against several detachments of the Armed Forces of the Philippines in Sulu, Cotabato and Lanao provinces. These attacks signaled the commencement of a full-scale war in the Bangsamoro homeland and the beginning of the armed struggle to assert the Moros’ right to self-determination.

As originally seen by the MNLF, the right of the Moro people to self-determination can be fully expressed only through independence and the establishment of a Bangsamoro republic. However, under the Tripoli Agreement of Dec. 23, 1976, the MNLF reduced its demand to “genuine political autonomy” within the realm of sovereignty and territorial integrity of the Philippine republic.

The Tripoli Agreement led to the breakup of the MNLF as a large faction led by Sheik Salamat Hashim dissociated from the group of Misuari in 1977. The new faction opposed Misuari’s acceptance of autonomy instead of continuing the struggle for independence.

The struggle for Moro self-determination was back on the agenda.

(Jamail A. Kamlian, Ph.D., author of the book “Bangsamoro Society and Culture,” is a history professor at Mindanao State University-Iligan Institute of Technology.)