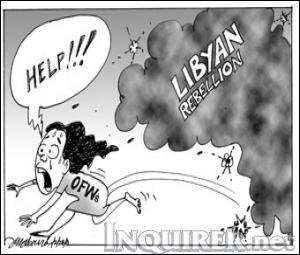 The official name of Gadhafi’s Libya is the Great Socialist People’s Libyan Arab Jamahiriya, with the last term Gadhafi’s own coinage, defined (as a briefing paper by the US Department of State notes) “as a ‘state of the masses’ governed by the populace through local councils. In practice, Libya is an authoritarian state.”

An authoritarian state without any viable center of potential alternative power. “Unlike neighboring Egypt and Tunisia, Libya lacks the steadying hand of a military to buttress a collapsing government,” the New York Times wrote the other day. “It has no Parliament, no trade unions, no political parties, no civil society, no nongovernmental agencies. Its only strong ministry is the state oil company.”

Gadhafi is not even officially connected with the government, and is routinely referred to in government bulletins by such titles as “Brother Leader and Guide of the Revolution.” There is no mistaking his hold on Libya in the past four decades however, and the extreme difficulty in which the anti-Gadhafi opposition finds itself today.

The spontaneous nature of the anti-Gadhafi revolt, which began only two weeks ago, after the 18-day Egyptian revolution deposed Hosni Mubarak (who became dictator in 1981, the same year Marcos ostensibly lifted martial law and ran for a third term as president), has meant that those opposed to Gadhafi have not had the opportunity to coalesce around unifying figures. In the first week or so of the uprising, the focus of unity seemed to be the old Libyan flag, used when the country gained independence in 1951. Only in the last couple of days has an attempt to form a united front against Gadhafi taken solid shape, through the still untried leadership of Mustafa Mohamed Abud al-Jeleil, once the country’s justice minister.

Gadhafi himself has sworn to die like a martyr, has summoned both loyal tribes and paid mercenaries to Tripoli to mount a defense of the capital and has escalated the violence, ordering for instance that firearms be provided to loyal civilians and that snipers continue to fire at protesters.

The possibility of yet another peaceful people power uprising knocking down yet another authoritarian regime has faded; instead, Libyans face the specter of prolonged civil war.

For this unfortunate state of affairs, Gadhafi has only himself to blame. Addiction to absolute power is a form of insanity; by ordering his own guns for hire to fire on his own people, Gadhafi gives all of us incontrovertible proof of the madness that has him in its grip.