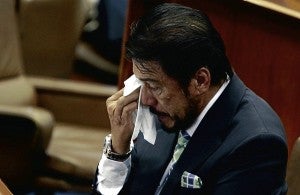 SOTTO GETS EMOTIONAL. Majority Leader Vicente “Tito” Sotto III became emotional while delivering his “turno en contra” on the reproductive health bill on Aug. 13. Sotto was in tears as he told the story of his firstborn son who died five months after birth. JOSEPH VIDAL/SENATE PRIV

Sen. Vicente Sotto III’s use without citation of a blog by Sarah Pope on the safety of pills has landed him in hot water, with allegations of plagiarism.

But more important than the plagiarism issue is the senator’s inadvertent promotion of “fringe science” over mainstream science in this important policy debate on reproductive health (RH).

For Sotto’s “turno en contra” speeches, one would have expected him to use globally reputable scientific sources, usually from international agencies such as the World Health Organization, United Nations Population Fund and Unicef.

But Sotto’s apparent mistrust of these agencies’ pro-RH position probably dissuaded him from looking in their direction.

Nevertheless, there are other reputable agencies that he could have referred to, such as the US Food and Drug Administration, National Institutes of Health and Centers for Disease Control and Prevention.

These journal articles are synthesized by the Cochrane Collaboration (www. cochrane.org), a network of 28,000 dedicated people from over 100 countries. They work together to help providers and policymakers make well-informed decisions about health care by promoting the accessibility of the Cochrane Library (www.cochranelibrary.com), which “contains information deemed the gold standard for determining the relative effectiveness of different interventions.”

The question is: Why were none of the above mainstream sources ever consulted? Ranged against these formidable sources of scientific studies, why did Sotto and his staff cite a blog, the findings of which were never subjected to rigorous peer review as is what is done in scientific journals?

The problem with basing the “unsafe pills” argument of Sotto on a nonpeer-reviewed blog is that it could be a product of fringe science.

Fringe science is an inquiry in an established field of study that departs significantly from mainstream or orthodox theories (Fact-archive Encyclopedia, 2012). Fringe science has been described as highly speculative, far-out, wild, pseudo-scientific and employing novel hypotheses.

It can also be construed as early or “proto” science, and therefore nonmainstream and not yet held to be part of the accepted scientific canon. While some fringe science may employ the same scientific methods as mainstream or credible science, others may lack scientific integrity.

No contraceptive pills are absolutely safe, but mainstream science’s consensus is that they are generally safe (FHI, 1996).  For this reason, health agencies and US and European drug regulatory bodies have approved their use since the 1960s. Most developing countries, including the Philippines, have also approved their use.

Indeed, medical authorities have stated that “the health risks of oral contraceptives are lower than those from pregnancy and birth” (Crooks and Baur, 2005). 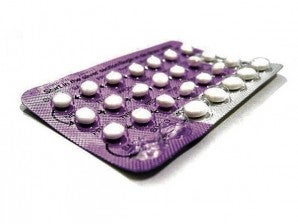 Oral contraceptives have been shown to raise the risk of venous thromboembolism and pulmonary embolism, but the fatal risk is very low at 1 per 100,000 women (Blanco-Molina and Monreal, 2010).

According to the US National Cancer Institute, some researchers suspect contraceptive pills could raise the risk in breast cancers, with the length of time of pill usage increasing the risk, i.e., at least 10 years. But the risks decrease and return to almost normal levels once women get off the pill.

Moreover, a 2010 systemic review did not support the suspicion of an increased cancer risk in users of combined oral contraceptives (Cibula, et al., 2010).

In general, while there are isolated individual risks of using pills, the attributable risk is so small and statistically negligible in the general population.

The study by Schwingi, Ory and Visness (1999) shows no observable excess in attributable risk of cardiovascular deaths related to pills (0.06 death per 100,000). In fact, the attributable risk of cardiovascular deaths from smoking, sedentary lifestyle, unhealthy diet and alcohol consumption are much significantly higher compared with contraceptive pill use.

Dangers of relying on fringe science

Sotto’s view that pills are unsafe is based on his conjecture that pills (brand name “Diane”) taken by his wife caused the congenital disease and eventual death of his son, Vincent Paul, 37 years ago.

But his conjecture has not been proven beyond reasonable doubt, using rigorous epidemiological standards for establishing and confirming causality. (See sidebar.)

His belief that they are unsafe is not shared by the vast majority of epidemiological research. Scientific consensus evolves after many studies on a specific hypothesis, some employing randomized controlled trials, with the results being gathered in meta-analysis on that particular issue.

Since the overwhelming mainstream consensus is that pills are safe, Sotto and his staff were constrained to source their reference from fringe science (Pope blog).

The use of fringe science in policy discussions on health raises serious issues. The Senate should look at this issue as it affects its integrity, and because the health of millions of women is at stake if pills and other contraceptives become unavailable mainly on the say-so of Sotto.

The turno en contra episode sets a dangerous precedent for fringe science to become a major influence on public policy. This is an unhealthy development and must be contained, through a number of ways.

The legislative staff should be encouraged to look at reputable sources of scientific evidence, preferably those with global reputation. Congress could also commission reviews of the health literature. This could be done under the Congressional Commission on Science and Technology and Engineering.

The intimidating nature of scientific studies requires that they be “laymanized” so that they can be understood by policymakers.  This can be done by the National Economic and Development Authority, or the health department’s Health Policy and Development Planning Bureau.

The local public-health community should be more organized and active. Pertinent national offices should be involved, such as the National Institute of Health, the Philippine Council for Health Research and Development, and the Food and Drug Administration. The opinions of experts in professional societies, and schools of medicine and public health should be sought. 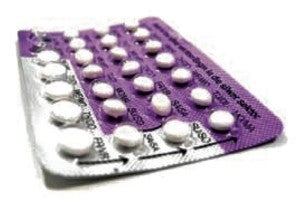 This unfortunate episode highlights once again the poor state of science education, research and advocacy in the Philippines.

The government should consider a high-level body that steers and commissions effectiveness and outcomes research, impact evaluation studies, and assessments of health technology.

Until we as a people begin to appreciate science, our social lives will be marked by junk thinking and fringe beliefs, and national progress will be difficult to achieve.

(The views expressed in this article are the authors’ and not their institutional affiliations.  The article was written without any support from government or the private sector.  More specifically, the Philippine Institute for Development Studies [PIDS] management was not involved in its writing or review. Thanks to Dr. Juan M.P. Nañagas for giving feedback on an earlier draft of this article.)

Oscar Picazo is an independent consultant on health financing and policy. He has an M.A. in economics from the University of the Philippines and was a Humphrey Fellow in health policy at Johns Hopkins Bloomberg School of Public Health and Hygiene, Baltimore, Maryland, USA. He has worked as health economist in more than 20 countries.

Marilen Danguilan trained as a medical doctor with postgraduate studies in public policy. She was the chief of the technical staff of the Senate committee on health, chaired by Sen. Edgardo J. Angara in 1988. She was a senior adviser on maternal health in Unicef/New York in 2000 and is now an independent consultant working on reproductive health.

Rouselle Lavado is a health economist on leave as a research fellow at PIDS while pursuing postdoctoral fellowship at the Institute of Health Metrics and Evaluation in Seattle. She earned her Ph.D. from Hitotsubashi University.

Val Ulep is a supervising research specialist at PIDS and lecturer of epidemiology at the Ateneo Graduate School of Business. He is a licensed medical technologist, and has a masters’ degree in epidemiology from the UP College of Public Health.

5. Edelman, A. et al. (2005).  “Continuous extended cycle vs cyclic use of combined contraceptives for contraception.” The Cochrane Database of Systemic Reviews. Issue 3.