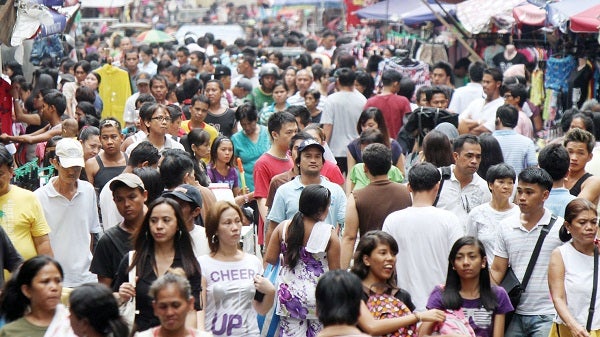 Having studied House Bill No. 4244 and the amendments proposed by its authors, we conclude that it is rights-based and supportive of state obligations to promote health under the Constitution and international covenants.

We also find HB 4244, known as the responsible parenthood, reproductive health and population and development bill, in accordance with what Filipinos want, the vast majority of whom consistently say in surveys that they support the measure.

Most important, it is an equity measure that aims to improve accessibility to reproductive health and family planning services and information. It is the poor, particularly women and their children, who stand to benefit the most from the passage of this bill.

After almost a decade of lack of state support for family planning services (except for natural family planning or NFP) under the Arroyo administration, which adopted an NFP-only policy, President Aquino’s endorsement of a comprehensive framework for reproductive health initiatives is welcome and long overdue.

It is the obligation of the state to provide information on and access to the full array of medically safe, effective and legal family planning services to enable women, men and couples, especially among the poor, to plan the number and spacing of their children.

Government budgetary support for modern family planning methods is neither unconstitutional nor a breach in good governance. The enactment of a reproductive health law has in fact solid bases in the 1987 Constitution, particularly in Art. XIII, Sec. 11 (“The State shall adopt a comprehensive approach to health development which shall endeavor to make essential goods, health and other social services available to all people at affordable cost.”)

As signatory to the above, the Philippines must ensure the right to reproductive health of all its citizens and enact programs that would guarantee the right of couples and individuals to decide freely and responsibly on the number and spacing of their children. Linked to the right to reproductive health are other long-established human rights, such as the right to life and survival, to the highest attainable standard of health, to equal treatment, to education, to development, to liberty and to personal security.

Contrary to the contention that the measure infringes on religious freedom, the bill actually respects and guarantees it. By providing individuals and couples adequate information on and access to a wide range of medically safe, legal and effective family planning methods, it enables Filipinos to make informed choices.

It is not a “population control bill,” which rewards or penalizes couples depending on the number of their children, or imposes a limit on the number of children one could have. At the heart of the bill is the right to informed choice on and access to one’s preferred family planning method, provided that this is legally permissible. This is fully in accord with the principle of mutual respect for religious differences enshrined in our Constitution.

In fact, the insistence on a government NFP-only policy by some sectors encroaches on religious freedom. The Philippines is a secular state and a pluralist society where various religious groups have competing views on the morality of “artificial” contraception. Whereas the Catholic Church proscribes the use of “artificial” contraception, other religious groups in the country allow it and have expressed support for the measure’s passage.

Neither political nor religious leaders should prevent people from practicing legal family planning methods according to their religious and personal beliefs.

The country needs an RH law to ensure budgetary support for the comprehensive, integrated and sustainable delivery of RH initiatives across local government units, regardless of the religious and personal convictions of national and local leaders.

Despite the Philippines being predominantly Catholic, most Filipinos want the full range of family planning services, including “artificial” contraception, which this bill provides.

In this light, it should not be viewed as an “assault” on Filipino sensibilities, or as a “Western imposition” on the populace. Rather, the strong popular support for it shows the deeply felt need for reproductive health services.

The 2011 Family Health Survey by the National Statistics Office found that the Philippines’ maternal mortality ratio increased by 36 percent, from 162 women dying from pregnancy-related complications and childbirth for every 100,000 live births in 2006, to 221 per 100,000 in 2011. (See chart.)

Many of these deaths stem from the high incidence of induced abortions. An estimated 473,400 women had induced abortions in 2000, an abortion rate of 27 per 1,000 women aged 14-44, and a ratio of 18 abortions per 100 pregnancies. (Juarez, Cabigon, Singh and Hussain, “The Incidence of Induced Abortion in the Philippines,” 2005.)

Projections for 2008, based on the 2000 data, indicated that 1,000 Filipino women died in 2008 as a result of abortion and that about 90,000 were hospitalized because of complications (Guttmacher Institute, “Meeting Filipino Women’s Contraceptive Needs,” 2009). 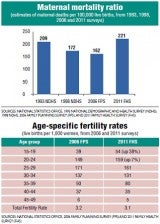 For these women, terminating a pregnancy is an anguished choice they make in the face of severe constraints. Their top three reasons for doing so were: they could not afford the economic cost of raising another child; their pregnancy occurred too soon after the last one; and they already have enough children (Juarez, Cabigon, and Singh “Unwanted Pregnancies in the Philippines,” 2005). Thus, for these women, abortion has become a family planning method.

Our current maternal mortality ratio of 221 per 100,000 live births translates to 15 Filipino women dying every day, according to the United Nations. Births that are too frequent and spaced too closely take a debilitating toll on their health, so that many of them die during pregnancy or at childbirth. More Filipino women’s lives would be saved if they had access to family planning information and services, as well as to good prenatal, delivery and postpartum care. (See box.)

Contrary to claims that it is “antilife” because it abets abortion, the bill “recognizes that abortion is illegal and punishable by law.” By giving couples, especially women, information on and access to medically safe, legal, affordable and quality family planning methods, the measure in fact seeks to avert unwanted and unplanned pregnancies which are the root cause of induced abortions.

“Artificial” contraceptive methods such as pills, female sterilization, injectables, intrauterine devices and condoms are all legal in the Philippines. What HB 4244 seeks is to make family planning methods that are legal (registered with the Food and Drug Administration) available for those who cannot afford them. According to the NSO’s 2011 Family Health Survey, 16.2 percent of married or cohabiting women aged 15 to 49 were not using any family planning method because it was “hard to get.”

As for treating modern family planning products and supplies as “essential medicines,” this is not a new approach taken by the bill. Since the late 1970s, the World Health Organization has included contraceptives as part of its core list of essential medicines.

While pregnancy is not a disease, women can die from it as well as from childbirth. To regard contraceptives as “essential medicines” is to recognize the life-saving effects of contraceptives which help a woman limit and space her pregnancies.

A controversial feature of the bill is age-appropriate reproductive health and sexuality education beginning in Grade 6 (amended from Grade 5) up to fourth year high school.

As stated in the Catholic Bishops’ Conference of the Philippines pastoral letter “Choosing Life, Rejecting the RH Bill,” the bishops “condemn compulsory sex education that would effectively let parents abdicate their primary role of educating their own children, especially in an area of life—sexuality, which is a sacred gift from God.”

The bill’s authors have thus proposed an amendment to give parents the “option of not allowing their minor children to attend classes pertaining to Reproductive Health and Sexuality Education.”

Does sexuality education lead to earlier or increased sexual activity outside of marriage? In a 2009 report, Unesco defined sexuality education as “an age-appropriate, culturally relevant approach to teaching about sex and relationships by providing scientifically accurate, realistic, nonjudgmental information.”

On the contrary, 37 percent of the programs resulted in the participants’ delayed initiation into sex and 44 percent brought about a decrease in the number of sexual partners of the participants.

Unprotected sex and lack of knowledge about sex can also result in HIV/AIDS. According to a 2010 report by the United Nations Programme on HIV/AIDS (UNAIDS), although the Philippines has a relatively low prevalence of HIV cases, it was one of only seven countries in the world that recorded a sharp increase (25 percent) in the number of HIV cases from 2001 to 2009.

The enactment of the bill can help arrest the increase in the number of HIV cases and AIDS-related deaths through programs to prevent and manage HIV/AIDS and other sexually transmittable infections, and through education and counseling programs on sexuality and reproductive health.

Our collective appraisal of HB 4244 is that it is a vital piece of legislation that needs to be passed urgently. It upholds the constitutional right of couples to found a family in accordance with their religious convictions; honors our commitments to international covenants; and promotes the reproductive health and rights of Filipinos, especially  those who are most marginalized on this issue—our women, poor families and young people.

Moreover, as faculty members of a Catholic university, we believe that the key principles of the RH bill—promotion of reproductive health, subsidizing the health needs of the marginalized and vulnerable, guarantee of the right to information and education of adults and young people alike, respect for the freedom of choice of individuals and couples in planning their families—are compatible with the core principles of Catholic social teachings, such as the sanctity of human life, the dignity of the human person, the preferential option for the poor, integral human development, human rights and the primacy of conscience.

The time has come to vote on and pass the measure, and to make its enactment one of the enduring legacies that the 15th Congress and the Aquino administration can offer to the Filipino people. We ask our legislators to muster the courage and wisdom to vote, not on the basis of vested interests, but in the service of the people, especially the poor, from whom they derive and to whom they owe their mandate.

Speaking only for ourselves and not for the rest of our colleagues, the university, or the Society of Jesus, we reiterate our full and unequivocal support for HB 4244.

(This is an abridged version of the Declaration of Support for House Bill No. 4244 first released on Aug. 13 and reissued on Aug. 18, with an expanded list of signatories. The 192  signatories come from various schools of Ateneo de Manila University: Loyola Schools, School of Medicine and Public Health, Law School and School of Government. The list of signatories can be viewed at interaksyon.com and rappler.com.)

Villar Group gears up for AllValue Shopping Party on Dec. 3; around P 1-million promos and discounts up for grabs