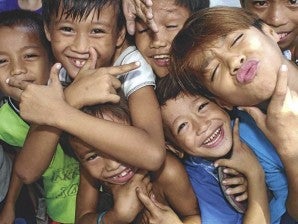 The population issue has long been dead and buried in developed and most developing countries, including historically Catholic countries.

That it continues to be debated heatedly in our country merely testifies to the lack of progress in policy and action. The Catholic Church hierarchy has maintained its traditional stance against modern family planning (FP) methods, particularly modern (also referred to as “artificial”) contraceptives.

On the other hand, the State acknowledges the difficulties posed for development by rapid population growth, especially among the poorest Filipinos. But it has been immobilized from effectively addressing the issue by the Catholic hierarchy’s hard-line position, as well as the tendency of some politicians to cater to the demands of well-organized and impassioned single-issue groups for the sake of expediency.

Caught between a hard Church and a soft State are the overwhelming majority of Filipinos who affirm the importance of helping women and couples control the size of their families and the responsibility of the government to provide budgetary support for modern FP services.

Renewed impetus to the debate has been given by the public and political interest in the decade-and-a-half old bill on “Responsible Parenthood, Reproductive Health, and Population and Development” (RH bill, for short). Unfortunately, serious discussion has been hampered by the lack of reliable information and the proclivity of some parties in the debate to use epithets that label the bill as “proabortion,” “antilife” and “immoral.”

There were a few aspects of the bill to which some groups have expressed objections, which the latest version has already addressed. In any case, the main thrust of the bill—“enabl(ing) couples and individuals to decide freely and responsibly the number and spacing of their children and to have the information and means to carry out their decisions”—is something we strongly and unequivocally support. In what follows, we explain why. Owing to the lack of a clear population policy (RH/FP programs) besides just modest economic growth since the 1970s, our country sadly has fallen well behind its original Asean neighbors (Thailand, Malaysia and Indonesia) in terms of both demographic and economic indicators. (See Table 1.)

Sadder still is the prospect that unless the RH (or responsible parenthood) bill is passed in Congress and swiftly implemented, our country will likely be overtaken even by its latecomer Asean neighbors (Vietnam, Cambodia, Laos and Myanmar) in a few years time.

At the micro level, large family size is closely associated with poverty incidence, as consistently borne out by household survey data over time. In short, poor families are heavily burdened when they end up with more children than they want. Official data from the Family Income and Expenditures Survey (FIES) since 1985 have unambiguously shown that poverty incidence is lower for families with fewer children but rises consistently with the number of children. (See Table 2.) Among families with one child only 2.9 percent are poor compared with households having nine or more children where 46.4 percent are destitute (FIES 2009).

Moreover, larger families make smaller investment in human capital per child—investment that is crucial to breaking the vicious chain of intergenerational poverty. Average annual spending on education per student falls from P8,212 for a one-child family to P2,474 for a family with nine or more children, and average health spending per capita drops correspondingly from P3,389 to P582 (FIES 2006 and Labor Force Survey 2007). On the average, among the poorest 10 percent of women of reproductive age, 44 percent of pregnancies are unwanted [Family Planning Survey (FPS) 2006]. Overall, 54 percent of all pregnancies are unintended [Guttmacher Institute and UP Population Institute (GI and UPPI), “Meeting Women’s Contraceptive Needs in the Philippines,” 2009]. Unwanted births represent a considerable unmet need for FP services. Among the poorest families, 22 percent of married women of reproductive age express a desire to avoid pregnancies but are still not using any family planning method (FPS 2006).

Contraceptive use remains extremely low among poor couples because they lack information and access. For instance, among the poorest 20 percent of women, over half do not use any method of family planning whatsoever, while less than a third use modern methods (FPS 2006). Among the poorest women, who want to avoid pregnancy, at least 41 percent are unable to practice any method of contraception.

Lack of access to contraception has important health implications. The maternal mortality rate (MMR), already high at 162 per 100,000 live births [Family Health Survey (FHS) 2006], has risen further to 221 (FHS 2011) and, hence, it is highly unlikely to meet the Millennium Development Goal of 52 by 2015. Having too many and too closely spaced children raises the risk of illness and premature deaths (for mother and child alike).

From 11 women dying daily owing to pregnancy and childbirth-related causes based on the 2006 MMR, this number had risen to at least 15 maternal deaths each day as of 2011. Moreover, many unwanted pregnancies result in induced and illegal abortions, numbering 560,000 annually as of 2008 (GI and UPPI 209).

The health risks associated with mistimed and unwanted pregnancies are higher for adolescent mothers, as they are more likely to have childbirth-related complications. Almost 25 percent of uneducated teenagers begin childbearing compared with only 3 percent of those who have attended college or higher. The pregnancy rate among teen-aged girls rose from 39 per 1,000 women in 2006 to 54 more recently (FHS 2011).

There are unintended social costs (negative externalities) arising from mistimed and unplanned pregnancies. Parents, who are able to space their children and achieve their desired number, are also more likely to bear the full cost of raising and educating them.

By contrast, poor families having more children than desired are constrained to rely on public education and health services and other publicly provided goods and services. In short, in a situation where government is already hard-pressed in financing even the most basic items of public spending, having no national population policy is tantamount to burying one’s head in the sand.

Moreover, women who have children sooner than planned are rarely in the best of health during pregnancy and are more likely to seek medical treatment. And poor women typically utilize public health care facilities. Public education and health facilities are already congested and decongesting them would entail increased taxation.

Providing services for planning and spacing pregnancies is one way of alleviating the tax burden. Teen pregnancies also impose a social cost. Since teen mothers are more likely to drop out of school, they are also less able to internalize the cost of rearing their children and more likely to shift this burden to the government. 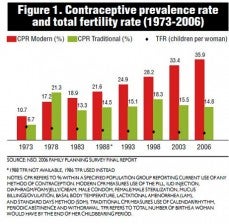 The data highlight the importance of full information and access to the whole range of modern methods, rather than NFP only. Figure 1 shows a close association between the reduction in the average number of children a woman bears, use of modern methods, and, to some extent, lower utilization of traditional methods. The RH bill addresses both private and social costs of uninformed, unplanned and unprotected reproductive health behavior.

All told, RH and FP programs offer a win-win solution. They lift the well-being of individual women and children, and benefit the economy and the environment as well.

The current debate on the population issue has become unnecessarily muddled by conceptual and factual distortions. Some groups, including the Catholic Bishops’ Conference of the Philippines and other “prolife” groups, vehemently oppose the RH bill because they claim that it is proabortion and is antilife.

A studious reading of the bill, however, shows that these are clearly erroneous claims. In the first place, there is an obvious definitional and scientific difference between contraception, which occurs before conception, and abortion, which occurs after.

In the second place, the bill’s main thrust is to provide full information on, access to and choice from among the whole range of traditional, modern, and “natural” family planning methods for contraception. The bill is, in fact, unequivocally and explicitly against abortion—thus, “abortion shall remain penalized under the Revised Penal Code and relevant jurisprudence.”

Some objectors to the RH bill have further argued that the bill will only lead to promiscuity, the breakup of families, decay of moral values and hedonism. But this is pure ideological conjecture—an assertion sans logic and empirical basis. Gratis asseritur, gratis negatur.

Sadly, the previous administration also contributed to the confusion. Former President Gloria Macapagal-Arroyo asserted at the General Assembly of the United Nations in its 60th session on Sept. 15, 2005 that NFP technology was found “effective compared to artificial contraceptives” by the World Health Organization (WHO).

She added that: “the Population Council of New York has found that artificial contraception contributes only 2.0 percent to the decline of birth rates while the combination of improving the economic condition of the family, urbanization and breast-feeding contributes 98 percent.” When asked for their reactions, however, both the WHO and the Population Council categorically disavowed the former President’s statements.

More misinformation was contained in the former President’s Sona (July 28, 2008). She asserted that her policy of NFP combined with female education reduced population growth to 2.04 percent during her administration compared with 2.36 percent when “artificial” birth control techniques were pushed. At best, the former President’s statement was disingenuous, since it is well-known that more educated females are more likely to use modern (“artificial”) contraceptive methods.

On the other hand, how could the use of “modern NFP” have contributed to the fall in population growth when its use rate among married women of reproductive age (15-49) actually dropped from 0.5 percent to 0.3 percent in 2001-2006? By contrast, their use of modern (“artificial”) contraceptives rose from 33 percent to 36 percent during the same period. This actually implies that it was modern (“artificial”) contraceptive use that rose as women became more educated, and thus was more likely to be associated with the decline in the population growth rate.

Debate is always healthy: religious and other groups are perfectly free to espouse their own views and opinions. The line must be drawn, however, at that point where deliberate efforts are made to misinform and distort the true and well-meaning provisions of the RH bill.

An unambiguous and consistent national population policy is long overdue in our country. It is an integral part of development and poverty reduction strategy. Once passed, the RH bill can be a good instrument of national policy for population and development.

Espousing “natural family planning only” is a position inconsistent with the spirit and letter of the bill and reflects a lack of seriousness in pursuing long-term economic development and poverty reduction.

It is in this spirit of debate that we express our own opinion. We say—based on serious evidence—that the RH bill is propoor and authentically prolife and profamily.

We, therefore, strongly support the RH bill and urge the national leadership to be fully and unequivocally behind it. It is time the President declared the RH bill urgent.

The authors represent nearly all members of the UP School of Economics faculty. The opinions expressed in this paper, however, reflect solely the views of the authors and not the official position of the UP School of Economics. The paper is an updated and abridged version of an earlier paper first issued in August 2008 and reissued in February 2011. It also partly derives from an older paper titled “Population and Poverty: the Real Score” ([ecember 2004], prepared largely by the same authors.)