Medicines still beyond reach of many Drugs in the Philippines are more expensive than those in other parts of Asia and in countries of similar economic status.

Brand names in the Philippines have been found to be 5 to 30 times more expensive than similar brand names of similar manufacturers in India and Pakistan. This is the strongest factor that impelled the government to institute a parallel drug importation policy under the Cheaper Medicines Program. (Tables 1 and 2)

The trend is not improving. In fact, it is worsening, at least until after the imposition of the Government Mediated Access Price in 2010.

As Table 3 shows, the ratio of local median prices to international reference prices, especially for innovator (or originator) brands, in both public and private sectors, rose in most of the past decade. Indeed, the ratios of Philippine price to India price for all the four branded drugs considered in Figure 1 rose from 2004 to 2010.

Gains have been achieved in the production and consumption of generic drugs, following the enactment of the Generics Act in 1988.

Today, it is claimed that 5 to 6 out of 10 Filipinos now purchase generic drugs. As Table 4 shows, an increasing proportion of Filipinos are buying cheaper generic drugs and the proportion of households that did not buy medicines (for any reason) has declined significantly.

The Department of Health has mandated all government health workers to use only generic terminologies in drug purchasing, prescribing, dispensing and reimbursement. Reports indicate that generic manufacturers now sell at prices 55 to 80 percent lower than their branded counterparts.

However, even the cheapest generics in the Philippines still sell at a high multiple of international reference prices. The case is even worse for originator drugs. Thus, affordability of drugs remains a serious problem.

A World Health Organization (WHO) survey of patients in health facilities in 2009 defined affordability as the number of days’ wages that the lowest-paid government employee needs to purchase standard treatments for selected conditions.

In a separate WHO household survey in 2009, it was found that the average cost of a prescription for acute illness was P485 and the monthly cost of medicines for chronic diseases was P946.

Health insurance penetration among the surveyed households was very low and even among those with health insurance, medicines for outpatient care were not usually covered.

To economize on going to the doctor, Filipinos commonly resort to self-treatment or self-prescription.

In the WHO household survey, over half of the medications taken in acute illness were self-prescribed or prescribed by a nonhealth professional. Of course, this practice of self-treatment creates its own problems, including possible improper medication and drug resistance in the case of use of antibiotics.

The household affordability of medicines is particularly acute for sufferers of chronic and debilitating illnesses requiring maintenance drugs. A study on diabetes care in the country shows that there are very few sustainable measures for the maintenance of regular medications of diabetics because of personal cost constraints, which result in irregular treatment that lead to more expensive complications and hospital admissions later. 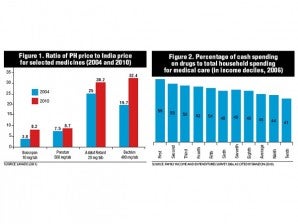 Why do drugs take up a large proportion of household medical care costs, especially among the poor?

A primary reason is the absence or weakness of risk pooling. Many of the poor, especially those in the informal sector, are not in any health insurance risk pool, such as PhilHealth, private health insurance, or community, local government unit, or other microinsurance programs. Moreover, even if they were in a risk pool, outpatient drug purchases are typically not a covered benefit in such risk pools, including PhilHealth. (Table 6)

As for inpatient PhilHealth drug benefits, poor purchasing practices (especially in government hospitals) often lead to bloated costs. The absence of drugs in many government hospitals also forces households to buy from private pharmacies (out-of-pocket spending). Thus, the two long-standing problems related to this issue are:

No case-based payment for hospital care. Under fee-for-service (itemized billing) system of paying providers, private hospitals and physicians have little incentive to use cheaper drug alternatives (such as generics) because the higher their value of claims, the more reimbursements they obtain and the better off they would be.

Most drug ingredients in the Philippines are imported. Most local drug manufacturing is through a toll system, a version of contract manufacturing where production is outsourced by an originating company to third parties.

Another key factor in the local pharmaceutical market is the overwhelming share of branded medicines. Before the end of the previous decade, the overwhelming demand for drugs is for originator brands and “branded generics.” True generics accounted for a very small percentage (about 3 percent) of sales. By contrast, they accounted for as much as 50 percent of the US market. This is counterintuitive in light of the already off-patent status of many of the essential drugs in the Philippines.

Lack of household knowledge of drugs, pervasive marketing and advertising, the strong role of medical representation in the sale of drugs and the incentives given to prescribing doctors have been frequently cited as contributing to the persistence of high drug prices and the high consumption of branded drugs in the country.

But perhaps the most important factor is the sheer lack of supply of generic alternatives to households wanting them, a situation that persisted until past the middle part of 2000s when generics finally emerged on their own, thanks in part to initiatives like parallel drug importation, village pharmacies, drug franchises and drug treatment packs.

Ball and Tisocki (2009) undertook a study in three regions of the country to examine the price components for originator brands and a generic version of six medicines—cotrimoxazole, coamoxiclav, atenolol, glibenclamide, amlodipine and atorvastatin.

The study covered public hospital pharmacies, chain and independent retail pharmacies, and village pharmacies (Botika ng Barangay). The selling price to patients was determined at each outlet and then the price was traced back through the supply chain through distributors to manufacturers or importers, using invoices and/or other documents from which validated data could be obtained.

The results of the study indicate the following:

Highly concentrated market structure and product segmentation. Richer Filipinos tend to use originator brands and “branded generics” sourced from private drugstores and hospitals, while poorer Filipinos rely to a greater extent on lower-priced generics sourced from public facilities and community outlets. The middle class tends to follow richer Filipinos’ use of originator brands and “branded generics” but with greater use of public facilities.

The dominance of expensive originator brands and “branded generics” among upper-class Filipinos is due to a number of factors, including strong marketing by dominant manufacturers and support of their products by prescribing physicians enticed by medical representatives; lack of competition from public and NGO outlets which concentrate on provision of lower-priced generics to the poor; information imbalance among patients relying on physician advice and lack of knowledge of competing products; and inadequate assurance of the generics’ quality by the Food and Drug Administration, leading to popular doubts about the bioequivalence of generics to more expensive originator brands or “branded generics.”

Cost-increasing value-added tax (VAT). VAT is charged at a rate of 12 percent which the patient has to pay. The original VAT is incurred at the first stage of the supply chain, and distributors and retailers often charge their markup based on the VAT inclusive price rather than on the cost excluding VAT. This practice ratchets up the price paid for by the patient.

Adverse effect of senior citizens’ discounts. Senior citizens are eligible for a 20-percent discount on the retail price of medicines. While retailers could offset some of this cost (7 percent) through their VAT returns, there is no specific budgetary provision for this. So, the remaining 13 percent has to be recouped by retailers through increased prices to all patients.

Discount schemes. To promote their corporate image, pharmaceutical companies and retailers have resorted to loyalty cards that provide discounts and thereby offer incentives to customers to purchase a particular brand or to buy from a particular store.

These programs are often accompanied by patient assistance schemes that in turn channel consumers to the promoted products. The discount programs of Pfizer and Mercury Drug have been the most visible in this regard. While there are certain positive features in such programs, they also tend to cause irrational medicine selection by patients or their physicians, and could discourage them from looking at other (cheaper) alternative drugs.

Through a combination of the above factors, there is a noticeable large variation in the prices of fast-moving drugs in the Philippines. Some outlets charge as much as two or three times the price of similar drugs in other outlets.

(Oscar F. Picazo, a former senior economist of the World Bank Pretoria office, is a consultant to the Philippine Institute for Development Studies. This article was excerpted from the PIDS discussion paper “Review of the Cheaper Medicines Program of the Philippines,” which was released in June.)