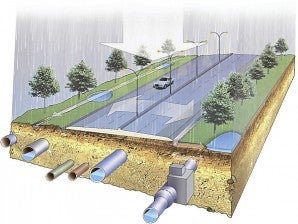 It’s a road, a water catchment and a power generator all rolled into one.

The proposed North Luzon East Expressway seeks to cut travel time from Quezon City to Nueva Ecija by a third, collect water that can provide a week of Metro Manila’s needs and generate electricity of up to 120 megawatts (MW).

These features will make it the country’s first toll road with zero-carbon footprint, says its proponent, Ausphil Tollways Corp.

Its first stage of 18.9 kilometers will connect Commonwealth Avenue to Norzagaray, Bulacan. The second stage of 36 km is expected to reduce travel time to Cabanatuan City from Quezon City to just 45 minutes from 2 ½ hours.

It is estimated that the faster travel time would save motorists P1 billion in fuel and maintenance costs in one year. The road itself will become a huge impounding system that will collect and channel water through a series of ponds into the La Mesa reservoir. Before the water reaches the reservoir, it will be filtered by plants to eliminate pollutants.

The road is proposed to be built on the 60-meter-wide right of way where huge pipes underground carry water by gravity from Angat Dam all the way to the La Mesa reservoir in Quezon City.

Low-friction turbines are to be installed in the BNAQ6 line where 200-meter sections drop 12 meters, enough to provide head pressure to power a turbine that can generate 5 MW to 10 MW per section. Ausphil plans to build four turbine chambers along the 3.6-m diameter high-pressure steel pipe of BNAQ6.

Ausphil says the turbines can generate electricity that is substantially cheaper than the rates of Manila Electric Co. and may push down the cost of cement by 30 percent. Ricardo L. Penson, Ausphil  president and CEO, says that three cement plants in Norzagaray, the initial target market of the road’s electricity, produce 70 percent of the country’s cement.

Should the project push through, it can help ease traffic congestion in Quezon City, save motorists time and money, provide drinking water to residents of Metro Manila and generate electricity for industry. Juan V. Sarmiento Jr. 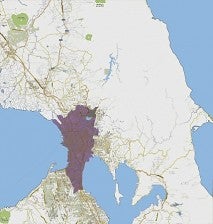 60-meter-wide right of way of the 18.9-km stage 1 from Quezon City to Norzagaray, Bulacan, equivalent to 114 hectares, will become a collection area.

It will generate, after absorption,

a minimum of 15.3 million cubic meters

of rain water for the La Mesa reservoir.

A 16-meter wide concrete and

44-m wide earthwork design will collect and channel into ponds rainwater all by gravity.

The water collected in ponds will go through a swale filtration system using a plant species that produce enzymes to eliminate pollutants in the rainwater.

in the catchment is absorbed into

the ground and the rest channeled

into a series of holding ponds. When

the assigned volume in the ponds

is reached, water is gravity-fed or pumped into the La Mesa reservoir or the local water districts. 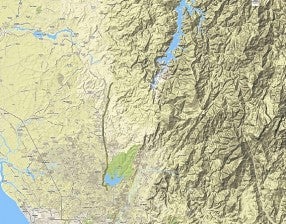 There will be four turbine chambers along the BNAQ6 aqueduct line (underground, not along the road), which acts

as a penstock to the hydro turbines.

diameter high-pressure pipe. The pressure is equivalent to 45,000 liters per second, enough to power 120 MW. Ausphil opted for just 35 MW.

Rule of thumb for generating power:

of their cost is power from diesel-fed generators). Ausphil says it can probably push down the cost of cement by P30 per bag.

from Quezon City to Cabanatuan

P1 billion, according to the DENR,

Unsolicited build-operate-transfer proposal submitted to the Philippine government in 2001. Rights of way from the Metropolitan Waterworks and Sewerage System were obtained in 2003.

Swiss challenge conducted in 2006 and the project was awarded to Ausphil in 2007.

Declared a toll road project by

the Toll Regulatory Board in 2009.

Got a special mention from

in his first State

Given the Green Infrastructure Award by Asia

in 2004 and selected as one of the three transformational engineering

UP Diliman is not Barangay UP Campus, says university official

Wife stabs husband after seeing her younger self in old photos, thought he was cheating