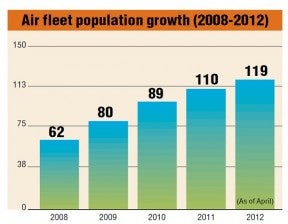 The Department of Transportation and Communications is closely and urgently working with domestic airline companies to address the air traffic congestion at the Ninoy Aquino International Airport (Naia).

We recognize the huge challenge stemming from the country’s air fleet having doubled from 62 aircraft in 2008 to 119 aircraft this year. Each of these planes flew at least three times a day to accommodate more than 29 million passengers in 2011, up from only 18 million in 2006.

For this reason, Naia on average has 48 takeoffs and landings during the peak operating hours from 7 a.m. to 4 p.m.  Naia runways’ current structure intersects with one another, thus can only handle an average of 36 takeoffs and landings every hour. This results in the delay of 12 remaining flights for a particular hour.

To improve air traffic, the DOTC has approved the construction of two Rapid Exit Taxiways within Naia at a total cost of P600 million.

These taxiways will allow planes to exit the runway at a much faster rate and permit others to immediately use the runway for either takeoff or landing.

The DOTC has also designated the Naia runways as a “Captain’s Runway.” This means that only captains (not their subordinates in training) shall have full control of the plane during takeoff or landing. This will lessen loiter time on the runway within the average of 100 seconds per movement.

Commercial flight arrivals and departures will also be grouped together to improve runway usage. The plan, for instance, calls for 10 takeoffs between 7 a.m. and 7:15 a.m., followed by 10 landings between 7:15 a.m. and 7:30 a.m. This translates to two to four additional movements (takeoffs and landings) per hour.

The DOTC will also tap Sangley Point in Cavite City for general aviation. We are now coordinating with the Department of National Defense to use the naval station’s runway for the 82 general aviation flights per day or about 7 flights per hour during daylight, including fish runs that use Naia.

Airline companies have agreed to read just their schedules to transfer particularly flights to and from 12 existing night-rated airports to off peak, i.e., nondaylight hours. 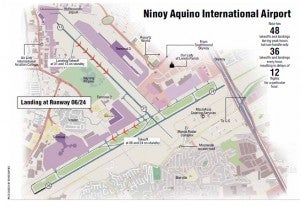 This will be effective in a few months as airlines need to reschedule the bookings as well as inform their respective passengers about these changes.

In addition, to more fully distribute the load outside of the peak daylight hours, the government will night-rate an additional 14 provincial airports.  These were chosen in consultation with the Department of Tourism and airline companies, which were consulted on the destinations they will be promoting.

The estimated budget needed to night-rate these 14 airports is about P900 million, exclusive of operational expenses.

Air traffic congestion and the measure we are undertaking to alleviate it necessitate adjustment from all stakeholders.  In cooperation with Philippine Airlines, Cebu Pacific, Zest Air, among others, we are comprehensively addressing related consumer complaints. We have sought the expertise of the Department of Trade and Industry, which has a consumer affairs unit, to support this effort.

As for the long term, we are looking at the Clark International Airport in Angeles City, Pampanga. The airport sits on a 2,000-hectare area compared with Naia’s 440 hectares and already has two existing parallel runways. Clark would be able to handle more passengers and aircraft at any given time.

We are focused on the construction of the high-speed rail system, similar to the Hong Kong Airport Express that will connect Metro Manila with the Clark International Airport.

The government is committed to spending the necessary and appropriate amounts for the capacity buildup via additional infrastructure.  As a counterpart, the airlines are helping reduce their load during peak hours by redistributing it on the off-peak hours.

These efforts will take a little time and may inconvenience a portion of the traveling public.  We ask for patience and understanding.

(Mar Roxas is the transportation and communication secretary.)