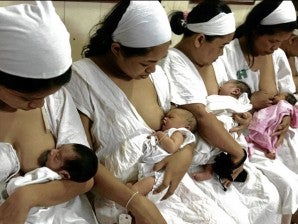 The Philippine population rose to 92.34 million in 2010, growing annually by 1.9 percent over the past decade, the National Statistics Office recently announced.

The rapid population growth was one of the factors that led to  the country failing to achieve one of its millennium development goals, which is to reduce by 17.25 percent the prevalence of underweight 0- to 5-year-old children by 2015.

The United Nations International Children’s Fund (Unicef) recognizes that nutrition is a basic human right and is vital to the survival, growth and development of children.

Children, who are given proper nourishment, especially in the early years of their lives, are more likely to be healthy and become productive members of their families and communities. Healthy children can also contribute to their country’s development.

Malnutrition among children, however, remains to be a major problem not only in the Philippines but also worldwide. According to Unicef, 23 percent of the world’s children under 5 were moderately and severely malnourished in 2003-2008, while the figure was 28 percent for the Philippines. It was also estimated that more than a third of all child deaths could be attributed to malnutrition.

One of the intervention programs designed to fulfill every child’s right to adequate nutrition all over the world was the Infant and Young Child Feeding (IYCF). In 2002, the World Health Organization (WHO) and Unicef developed the Global Strategy on Infants and Young Child Feeding (GSIYCF) after consultations with representatives of different countries, multilateral agencies, nongovernment organizations and civil society partners.

The global strategy’s major recommendation was for infants to be exclusively breast-fed for the first 6 months of life. This means that no other food or drink, not even water, except breast milk (including milk expressed or from a wet nurse) must be given to the infant for six months, but allows the infant to receive oral rehydration solution (ORS) drops and syrups (vitamins, minerals and medicines).

After six months, infants should receive “nutritionally adequate and safe complementary foods to meet their evolving nutritional requirements and breast-feeding should continue for up to 2 years of age or beyond.”

On the part of breast-feeding mothers, some physiological benefits include a decrease in the risk of breast and ovarian cancer. Breast-feeding also delays ovulation, so this allows mothers to practice natural child spacing.

From the psychological point of view, a strong bond develops between the mother and the child. One of the economic benefits of breast-feeding is lower expenses  for medicine since breast-feeding increases the child’s immunity to disease and infection.

In response to the endorsement by and the advocacy of WHO and Unicef country offices in the Philippines for the adoption of GSIYCF, the Philippine government prepared the National Policies on Infant and Young Child Feeding in 2005.

The policy provides the guidelines for improving the survival of infants and young children by enhancing their nutritional status, growth and development through optimal feeding anchored on exclusive breast-feeding, initiation of breast-feeding within one hour after birth and provision of timely, adequate and safe complementary foods at six months while continuing breast-feeding up to two years and beyond.

A comprehensive Philippine National Plan of Action on Infant and Young Child Feeding (2005-2010) was subsequently completed.  This served as the country’s framework for identifying priority actions for promoting, protecting and supporting breast-feeding and complementary feeding, and other necessary conditions to promote infant and young-child feeding practices.

The following policies and programs were similarly improved and strengthened to promote and support the goals of GSIYCF:

Executive Order No. 51 otherwise known as the Milk Code (1986).  It aims to promote, protect and support breast-feeding through intensified dissemination of information on breast-feeding and the regulation of advertising, marketing and distribution of mother’s milk substitutes (any food, e.g. infant formula marketed as a replacement for breast milk) and other related products, including bottles and teats.

Republic Act No. 7600 or the Rooming-In and Breastfeeding Act of 1992. This served as the legal basis for the Mother-Baby Friendly Hospital Initiative (MBFHI). The law says that newborn infants delivered normally should be placed on the mother’s breast immediately after birth and roomed-in within 30 minutes. If the infant was delivered by Caesarian section, the infant should be breast-fed and roomed-in within three to four hours after delivery.

Department of Health (DOH) Administrative Order 2007-0026 or the Revitalization of MBFHI in Health Facilities with Maternity and Newborn Care Services. This administrative order gave new guidelines for implementing the MBFHI. Hospitals previously certified as MBFHI would be reassessed and eventually issued with a certificate of commitment, a requirement for DOH and PhilHealth accreditation.

Despite the institutional support from the national government and various community-based and private-sector initiatives to promote breast-feeding in the country, the WHO Country Cooperation Strategy for the Philippines Report (2011-2016) said the exclusive breast-feeding rate among infants aged less than 6 months was 34 percent between 2003 and 2008.

Policymakers, planners and advocates of breast-feeding must be given pertinent information that would assist them in sustaining or even surpassing this level of exclusive breast-feeding rate.

Angel Locsin: Profit from ‘small’ stock in ABS-CBN to be donated to charity