Ban not a solution | Inquirer Opinion

Ban not a solution 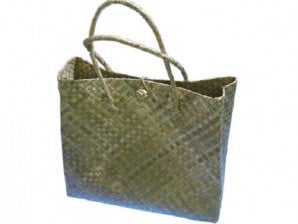 One drizzling day, Aling Saling bought half a kilo of rice. It was put in a brown paper bag which the 40-year-old housewife held at the bottom, all 10 fingers at full stretch. But one side of the bag ruptured, too weak to hold even its meager content.

Aling Saling coddled her torn paper bag like a baby to keep what was left of her precious rice from spilling onto the wet pavement. She was torn: should she kneel and pick up her rice one grain at a time or take refuge from the rain and protect what was left? She walked on, her shoulders hunched over her bag.

Her experience captured the essence of the continuing debate about the plastic ban, which has resulted in the shift to the use of paper bags. Paper requires the cutting of 17 trees to make a ton, the use of one gallon of clean water to make just one paper bag, and excessive use of energy which partly uses oil, the same culprit antiplastic groups claim is the reason they are for banning plastic.

Conversely, the ban denies consumers a convenient virtually all-purpose and all-weather material that won for two scientists the Nobel Prize in 1963.

There is another unintended or unseen issue arising from the ban: brown or recycled paper bag is not cleared as food-safe here or in developed countries. Newspaper may be worse as there are no existing standards on the ink and the paper for use as food wrap.

To simplify this health issue and to guide the public, brown paper bags must not touch food because of the chemicals used and because the waste paper used could have come from unsanitary sources.

White paper, unless it is from virgin pulp or bleached recycled wax coated or laminated paper, is food safe.

Muntinlupa City was the first local government unit (LGU) in Metro Manila to impose the ban. Others followed. Still more are poised to do the same. There was no scientific support for such a ban. But it was populist and therefore politically viable.

The ban started from the thinking that plastic is to blame for flooding.

Fast forward to the floods caused by Storms “Sendong,” “Pedring” and “Ondoy.” There simply was too much water as a result of global warming, for which man is largely to blame.

The floods then and now were caused by any combination of the volume of water; volume of waste which includes plastic and paper and all sorts of flotsam and jetsam; and the condition of the country’s drainage system, which is old and inadequate.

So to prevent floods, is banning plastic the solution? It is not.

To protect the environment, is banning plastic the solution? No, it is not. The problem is that people refuse to properly dispose of waste, whether plastic, paper, or anything. The problem is also the lack of implementation of existing laws on waste segregation. The problem is in people’s behavior and therein lies the solution. 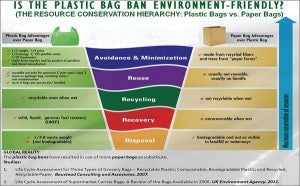 Consider a few science-based facts. A ban on plastic bags will inevitably increase the use of paper and this has its corresponding environmental costs.

A simplified comparison of plastic bags to paper bags includes consideration of the following:

Packaging. The UK Environment Agency’s study in 2006 on plastic and paper bags showed that an 8.12-gram plastic bag can carry 20 liters worth of groceries but it would take a 55.20-gram paper bag (or almost a 7:1 weight ratio) to do the same.

The bags’ weights were then used to calculate the following carbon footprints (note: Use of CO2 equivalents is due to some greenhouse gases not being CO2).

Climate-change mitigation and carbon footprints. The UK study resulted in the following carbon-footprint values for the plastic bag and the paper bag:

– 1.578 kg CO2 equivalent per plastic bag that was used once

In the Philippines, where paper bags are made from 100-percent  recycled paper, they need to be even heavier for the same packaging function.

Waste minimization. At the top of the resource-conservation hierarchy is waste avoidance and minimization. A comparison between plastic bags and paper bags (ref. Boustead Consulting and Associates) showed that over the bags’ life cycles:

– A gallon of potable water from public supply was used per paper bag, while one gallon of water was used to make 116 to 125 plastic bags

– To make one ton of paper, 17 trees need to be cut; none for plastic.

Reuse. Paper bags do not have handles and are less preferred for reuse because they cannot hold heavy loads. Plastic bags are reused not only for carrying groceries but also for carrying personal effects (“poor man’s bag”), and oftentimes are reused as garbage-bin liner.  Lastly, it is preferred over paper bags due to its cost, convenience and durability, allowing a consumer to carry as many as six plastic bags at a time.

Recycling. Plastic bags are recyclable even when wet while paper bags are not. Plastic is recycled into bags, industrial pallets, pails, drums, irrigation pipes, among other productive and convenient items.

Recovery. Plastic bags are sources of recoverable energy and can be converted into solid, liquid and gaseous fuels for power generation (ref. United Nations Environment Programme). Paper bags, on the other hand, are unrecoverable when wet.

Disposal. Assuming people do not properly dispose of their waste, paper bags blend with the water during degradation, polluting the water in the process permanently.

Plastic bags are very visible, can be plucked out, and leave the water unpolluted.

Petrochemicals.  Plastics come from a gas that is produced when making gasoline and other fuels. If this gas is not converted into plastics, it will have to be flared (burned).

No to absolute ban

As the Federation of Philippine Industries and the Philippine Chamber of Commerce and Industry had posited, the absolute ban on plastic bags and Styrofoam without thorough cost-benefit and life-cycle analysis would in the end prove counterproductive.

That said there is no reason to pit paper against plastic as both should coexist because both are essential. This is why developed countries which have thoroughly studied the pros and cons are taking a balanced approach and leaving consumers to make a choice.

The plastic industry directly and indirectly employs 650,000 people and generates investments running up to billions of pesos. There is need to balance the concerns for the environment with those of the industry and the livelihood of the tens of thousands of families it supports.

We in the plastic industry call on the government to reconsider the ban on plastic as a packaging material. We ask for a scientific and enlightened approach to plastic and urge that consumers be given the choice in the use of packaging material depending on their needs.

We are for proper waste segregation and disposal because the problem is people’s refusal to do it. The law is adequate but enforcement is not.

(Crispian Lao is the president of the Philippine Plastic Industry Association.)